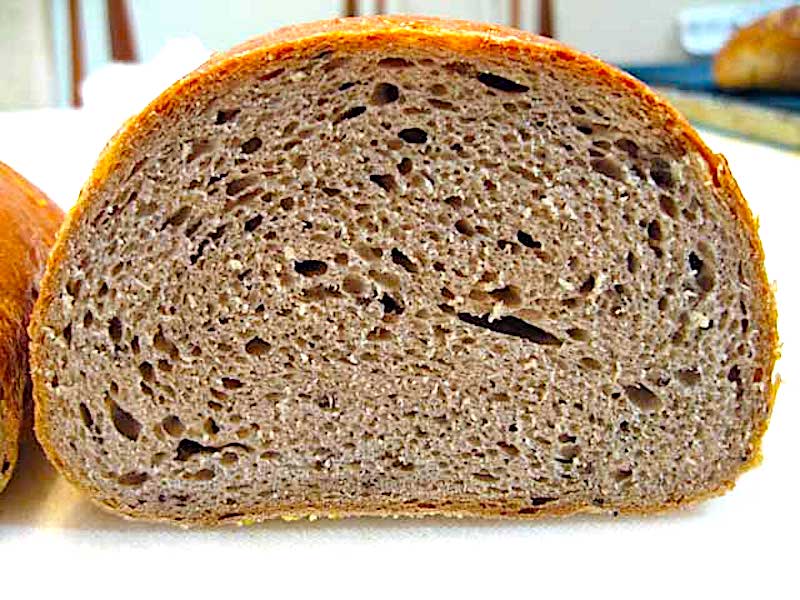 My Citizens, few things are as overwhelmingly depressing to this transplanted New Yorker as the previous lack of good rye bread available here in San Francisco. It’s a shandah (a tragedy!), as my grandmother would say – so, let us rectify this terrible tragedy once and for all, shall we? A local kosher baker JUST this evening asked me for a great rye bread recipe, so who am I to deny my Citizens the true flavor of NYC? 🙂

This lengthy post will tell you everything you ever needed to know about making the PERFECT New York Sour Rye Bread. One that tastes just like we used to buy in Brooklyn, to bring home warm and slather with butter or pile high with pastrami and mustard. The recipe is quintessential and from the unmatched book “Secrets of a Jewish Baker” by George Greenstein.

From the master’s lips to your attentive ears – don’t change a WORD of this recipe. It *IS* lengthy, as there is much prep work involved in getting the rye bread starter “started”.

But once done…oh, once done…you will experience rye bread like you’ve never imagined…and easily made at any time, as the starter can be re-used ad infinitum as long as you take care of it.

Rye bread is a type of bread made with various proportions of flour from rye grain. It can be light or dark in color, depending on the type of flour used and the addition of coloring agents, and is typically denser than bread made from wheat flour. It is higher in fiber than white bread and is often darker in color and stronger in flavor.

Dark rye bread was considered a staple through the Middle Ages. Many different types of rye grain have come from north-central and western and eastern Europe such as Scandinavia, Finland, Baltic countries, Poland, Ukraine, Russia, the Netherlands, Belgium, France and Germany. Around 500 AD, the Saxons and Danes settled in Britain and introduced rye, which was well suited to its temperate climates.

Pure rye bread contains only rye flour, without any wheat. German-style pumpernickel, a dark, dense, and close-textured loaf, is made from crushed or ground whole rye grains, usually without wheat flour, baked for long periods at low temperature in a covered tin. Rye and wheat flours are often used to produce a rye bread with a lighter texture, color and flavor than pumpernickel.

“Light” or “dark” rye flour can be used to make rye bread; the flour is classified according to the amount of bran left in the flour after milling. Caramel or molasses for coloring and caraway seeds are often added to rye bread. In the United States, breads labeled as “rye” nearly always contain caraway unless explicitly labeled as “unseeded.”

In Canada (especially Montreal), breads labeled as “rye” often have no seeds, whereas breads labeled as “kimmel” are usually rye with caraway seeds. Some unique rye bread recipes include ground spices such as fennel, coriander, aniseed, cardamom, or citrus peel. In addition to caramel and molasses, ingredients such as coffee, cocoa, or toasted bread crumbs are sometimes used for both color and flavor in very dark breads like pumpernickels.

The addition of caraway seeds to rye bread is to counter the bloating that can be caused by the high fiber content of rye. Caraway has well-known anti-flatulence properties; however, the association is so long-standing that the flavor combination is now almost inseparable.

There is nothing to compare to this NY-style rye bread for deli sandwiches of all forms, Citizens – you must try it without any further delay!

Add
452shares
TFD uses cookies and we comply with GDPR so you control your personal info! If you continue on, we will assume you are happy with this, Citizen! OkNoRead more