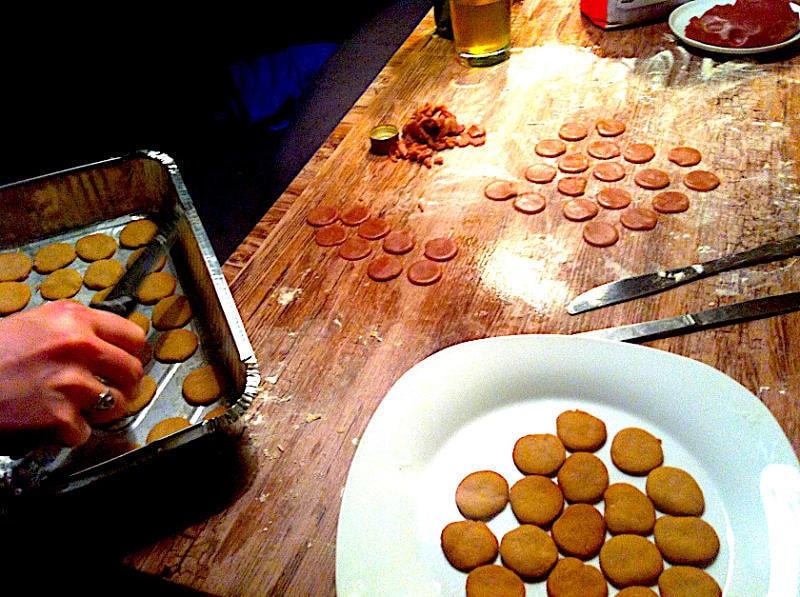 Citizens, this next example in our week of sacred bread recipes is one that involves no small amount of notoriety amongst certain circles – approach this with an open mind and you will be well-rewarded, I promise you!

I highly debated whether or not to include this recipe but decided that my Citizens, like myself, possess the intellectual and gastronomic curiosity that in the end influenced my decision to go forward. The final clincher was that I just recently discovered that a friend is a practitioner of Thelema, the religion this eucharistic cake comes from – and it is in fact his recipe I will share with you today!

As noted in Wikipedia:

Thelema is a modern 20th century religion based on a philosophical law of the same name. The law of Thelema is “Do what thou wilt shall be the whole of the Law. Love is the law, love under will.”

The Thelemic pantheon includes a number of deities, primarily a trio adapted from ancient Egyptian religion, who are the three speakers of The Book of the Law: Nuit, Hadit and Ra-Hoor-Khuit. The religion is founded upon the idea that the 20th century marked the beginning of the Aeon of Horus, in which a new ethical code would be followed; “Do what thou wilt shall be the whole of the Law”.

This statement indicates that adherents, who are known as Thelemites, should seek out and follow their own true path in life, known as their True Will. The philosophy also emphasizes the ritual practice of Magick, in which this recipe plays a central part.

The word thelema is the English transliteration of the Koine Greek noun θέλημα (pronounced Greek: [θélima]) “will”, from the verb θέλω “to will, wish, want or purpose.”

The Gnostic Mass of Thelema — technically called Liber XV or “Book 15” —  is similar in structure to the Mass of the Eastern Orthodox Church and Roman Catholic Church, communicating the principles of Thelema. It is the central rite of Ordo Templi Orientis and its ecclesiastical arm, Ecclesia Gnostica Catholica. The end of the ritual culminates in the consummation of the eucharist, consisting of a goblet of wine and a Cake of Light, after which the congregant proclaims “There is no part of me that is not of the gods!”

The Cake of Light is considered to be a eucharist, a symbolic union between the microcosm, Man, and the macrocosm, the Divine; and the consumption of which completes a sacred circle, affirming an intimate connection between the two, which strengthens with each sacrament.

The Cakes of Light are traditionally composed of meal, honey, leavings of red wine lees, oil of Abramelin, olive oil and a drop of fresh blood burned to ash.

Needless to say, TFD states in the most categorical of terms: ***DO NOT USE BLOOD AS AN INGREDIENT***.

My suggestion instead is to use some highly-caramelized maple syrup – the sap or “blood” of a tree – if you wish to stay true to the concept behind using it.

Olive oil is considered a sacred oil by many cultures and religions of the world – it is also an ingredient in the making of Oil of Abramelin, as the olive is noted “traditionally, the gift of Minerva, the Wisdom of God, the Logos.”

Abramelin Oil was considered by Crowley to be representative of the “whole Tree of Life – the ten Sephiroth are blended into the perfect gold.” Abramelin Oil is thus also a symbol of the Philosopher’s Stone of the Alchemists.

So – without further ado – I present to you this recipe from my highly talented friend, which as it happens is extremely tasty befiting his skills as both chef and mixologist.

The interesting thing about this recipe is that some of the ingredients are specifically for mystical purposes. I don’t know what your readership will make of them but the recipe itself is no secret, (though everyone I know makes them a little differently) so here is my way.

2c Kamut flour [(Amaranth, Teff, and Einkorn can be used though the ratio is a little different for each) personally Kamut is best for flavor, Amaranth is too sharp, Teff is too dark and looks deceptively like chocolate and Einkorn is denser but play and find what you like; I know someone who insists cornmeal is the best]

2 tbls honey (soft white honey is best, less likely to crystallize and make hard cakes. I wouldn’t recommend flavored honeys like orange or clove as it doesn’t sit well with the flavor of the Abramelin; though if you can get it from Hawai’i, Kiawe honey is really a nice variation)

Lg Dash of Beeswing (if you can get raw beeswing from a winery, so awesome! If not, the purified form known as Creme of Tartar works just dandy)

Lastly is a pinch of ash. This ash is made from the previous ingredients with the addition of “blood.” I use quotes here because the reference to blood comes from a Holy text that is allegorical and open to interpretation. So mix up the dough, take a pinch and add a few drops of the “blood” and burn it to ash. (I roll that dough out very very thin and put it in the broiler on high, does the trick but warning about smoke detectors and ventilation) Add a pinch of this to your future Cake batches. TFD NOTE – SEE MY PREVIOUS COMMENTARY AND SUGGESTED USE OF HIGHLY-CARAMELIZED MAPLE SYRUP AS A REPLACEMENT.

When making Cakes, I will sift the dry ingredients together (flour, tartar, ash) and separately mix the wet ingredients (olive, honey, Abramelin.) Then fold and mix the wet and dry together. The dough will be oily, sprinkle in more flour until it can hold shape.

Put the dough between two sheets of wax or parchment paper and roll out by hand. Cut out your Cakes according to the size and thickness you’d prefer. Thickness will increase as they bake so cut them thinner than you want the final one to be. As for size, I use a film canister to cut them out, it makes for a good size. Cut out the Cakes and lay them out on a non-stick baking sheet. Re-roll the cut away parts until the dough is used up. Yield is about 30-40 Cakes.

Gas mark for 150-200 depending on your oven and set the baking sheet in the oven. DO NOT LEAVE IN FOR TOO LONG! This is maybe 8-10 minutes. It really depends on your oven and thickness of Cakes. Keep checking them and pull them out when they are just firm to the touch. Pull them out and let cool, they will set up more as they come to room temperature and the honey solidifies. Gently remove them from the baking sheet and they are ready to be used for whatever purpose you need, spiritual or otherwise!