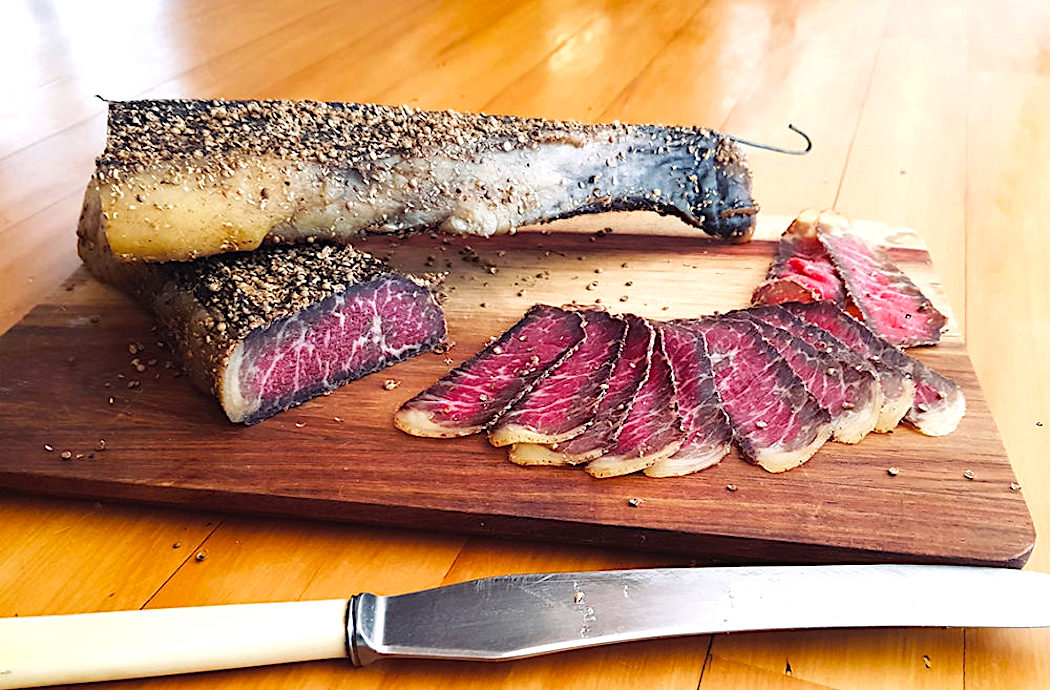 My glorious Citizens! TREMBLE in ecstatic fervor before the carnivorous ode to joy, a magnificat to meat, that alone is South African biltong – what jerky wants to be when it grows up and develops a truly refined palate! We are, of course, here in Thanksgiving week in the United States and most people are consumed with the annual Turkey fest, the ode to comfort food that all of us so desperately need in the midst of this pandemic.

That said, creating a tasty snack that is delicious any time, is pure protein and flavorful as all get out is a welcome respite from endless days of poultry-based pulchritude. Walk with me as I educate you on this most flavorsome snack straight out of Durban’s awesome food scene and enjoyed not only throughout South Africa, but Namibia as well (Namibians are truly CRAZY about their beef, and with good reason!). Biltong differs from jerky in three distinct ways:

Specifically, biltong is a form of dried, cured meat that originated in Southern African countries (South Africa, Zimbabwe, Malawi, Namibia, Botswana and Zambia). Various types of meat are used to produce it, ranging from beef to game meats such as ostrich or kudu. The cut may also vary, either fillets of meat cut into strips following the grain of the muscle, or flat pieces sliced across the grain.

It is related to beef jerky in that they are both spiced, dried meats; however, the typical ingredients, taste and production processes may differ. The word biltong is from the Dutch bil (“buttock”) and tong (“strip” or “tongue”). Meat preservation as a survival technique dates back to ancient times. European seafarers preserved meat for their long journeys by curing meat in salt or brine.

European settlers (Dutch, German, French) who arrived in southern Africa in the early 17th century used vinegar in the curing process, as well as saltpeter (potassium nitrate). The potassium nitrate in saltpeter kills Clostridium botulinum, the deadly bacterium that causes botulism, while the acidity of the vinegar inhibits its growth. According to the World Health Organization, C. botulinum will not grow in acidic conditions (pH less than 4.6); therefore the toxin will not be formed in acidic foods.

The antimicrobial properties of certain spices have also been drawn upon since ancient times. The spices introduced to South Africans by the Dutch include pepper, coriander, and cloves. In January 2017, a research group at the University of Beira Interior in Portugal published a study on the antimicrobial properties of coriander oil against 12 bacterial strains, and found that 10 of the 12 strains of bacteria were killed with a relatively mild concentration of coriander oil (1.6%).

In the two strains that were not effectively killed, Bacillus cereus and Enterococcus faecalis, the coriander oil reduced their growth significantly. The need for food preservation in South Africa was pressing. Building up herds of livestock took a long time, but with game in abundance in South Africa, traditional methods were called upon to preserve the meat of large African animals, such as the eland, in the warm climate. Iceboxes and refrigerators had not been invented yet.

Biltong as it is today evolved from the dried meat carried by wagon-traveling Voortrekkers, who needed stocks of durable food as they migrated from the Cape Colony north and north-eastward (away from British rule) into the interior of Southern Africa during the Great Trek. The meat was prepared with vinegar and spices then hung to be air-dried for a fortnight during the winter, when the colder temperatures further inhibited bacterial and fungal growth.

Once suitably dried the biltong was ready for packing in cloth bags which allowed air circulation to help prevent mold. Traditionally biltong was only made during the cold winter months when the risk of bacterial growth and mold would be at a minimum. Some recipes require the meat to be marinated in a vinegar solution (grape vinegar is traditional but balsamic and cider also work very well) for a few hours, then the vinegar is poured off before the meat is flavored with salt and spices. The spice mix is sprinkled liberally over the meat and rubbed in.

The vinegar serves as a primary inhibitor of Clostridium botulinum bacteria, according to WHO (the World Health Organization), while the salt, coriander, pepper, and cloves all have antimicrobial properties. Saltpeter is optional and can be added as an extra preservative (necessary only for wet biltong that is not going to be frozen). The meat should then be left for a further few hours (or refrigerated overnight) and any excess liquid poured off before the meat is hung in the dryer.

Other recipes, which were handed down from generation to generation, require the meat to be left overnight in the vinegar, salt, and spice solution (between 12 and 24 hours). The spice mix traditionally consists of equal amounts of rock salt, whole coriander (slightly roasted), roughly ground black pepper, and brown sugar. Traditionally biltong was made during the cold winters of the South African Highveld for best results. The cold, dry air typically dried out the biltong much more effectively, and in the best possible food safety environment.

Mold and bacterial risk are at a natural minimum, and thicker cuts can be hung to dry slowly for a richer texture, fuller flavor and dark color. Heat has only been introduced into the process in recent years, and traditional makers maintain that heat makes for an inferior end result. A traditional slow dry will deliver a medium cure in about four days.

As noted in a fantastic article on the subject in South Africa’s ‘The Daily Maverick’:

It’s winter in South Africa – biltong season. Give any meat-loving South African a chance and they’ll you about their favourite kind, their first biltong memories and the way they’ve hooked their foreign friends on it. We can get lyrical. And so we should. One biltong-loving WEG! reader, Buks Barnard, describes beef biltong as “a gift of the gods and a way to world peace”.

He’s not wrong. Biltong is synonymous with being South African. South African children are weaned on biltong; a dry piece makes for a tasty teething stick. Biltong is smuggled across many international borders to SA expats longing for a taste of home. It’s a meaningful “gift” to the local traffic department staff when you’re trying to pass your driver’s licence. It’s the go-to gift for Father’s Day and I’ve yet to hear a dad complain. It’s also big money.

According to the South African Institute, Food & Trees for Africa, the biltong trade is worth R2.5-billion. There is an exact science to making the perfect biltong – from the cuts to the drying. It starts with the meat. As with everything farm-to-table, working with the utmost respect when making your own biltong is of paramount importance. It requires only the prime cuts. See, biltong is like the prosciutto of South Africa.

No worthy Italian would dare make prosciutto with any cut other than the leg. South Africans shouldn’t compromise with their biltong, either. This is not to be snobbish. Like Italian prosciutto, real, good South African biltong is made up of only meat and spice. Hence, everything needs to be perfect. Biltong, first and foremost, should not be tough or difficult to eat. Ideally, biltong should be savoured… and the best way to achieve this is to eat it slice by slice with a knipmes (pocket knife).

Or, sliced thinly and eaten on toast. I’ve seen a single slice of beef biltong cover the length and width of a plaasbrood slice. “Dit wil gedoen wees (It wants to be done),” I can almost hear my great-grandmother brag. She was famed for her thick cuts of perfectly cured biltong. She also cut off of the end pieces of hanging biltong after about three days or so, when it was dry but still raw, and fried it in the pan like a steak. Talk about “dry aged”…

Apart from being lekker, biltong connects us to our earliest South African food roots – and they grow deeper than you might think. Yes, sure… the Voortrekkers did indeed rely on biltong when they trekked over the Drakensberg Mountains. The Great Trek was indeed where the first traditional biltong recipes and methods were experimented with and standardised. But biltong didn’t start there.

Biltong was, in fact, the brainchild of SA’s earliest inhabitants, the hunter-gatherer San and the pastoral Khoekhoe, collectively referred to as the Khoisan. In those early days, hunters would spend days – even weeks – tracking a herd of animals with bow and arrow. The objective was to hunt to secure enough food for survival. And when an animal was finally killed, it needed to be utilised 100%. Cutting meat in slender strips and drying it ensured that everything could be eaten – but over a long stretch of time.

Nutritionally speaking, it doesn’t get better than biltong. As well as being a phenomenal source of protein (up to 67%, all highly digestible), it is also rich in iron, vitamin B12, zinc and creatine. It’s high in calories (300 in about 100 grams) which would have been a very desirable quality for an early Khoisan hunter and his family. For more modern biltong lovers, an impressive accolade is that it doesn’t (or shouldn’t) contain any additives or preservatives. Just a fair amount of salt.

Beef biltong is preferred fatty and slightly “wet” with a distinctive red hue. Importantly, the quality of fat in beef biltong can serve as a clear indication of the quality of beef. White fat is no good, while an even layer of yellow fat on the rim is sought after.

So – now that we have established that biltong is awesome, let’s get to the ‘meat’ of the matter – how do you make it to TFD‘s exacting and monomaniacal standards?!

First – the beef. I prefer to go with tradition and use the top round London Broil, and I greatly prefer to make it with full-blood American Wagyu beef for the ultimate in tenderness! This is a great source for it. You can go with a less pricey option by using black Angus, grass-fed – but the Wagyu is truly sublime and actually not that expensive since this is American Wagyu, not Japanese.

Since TFD prefers his biltong a bit moist, I need to use Prague Powder #1, used to cure meats and sausages to prevent harmful bacteria growth. It is also what gives the meat a rosy hue just like hams (which also use this same compound in the cure). Buy it here – IMPORTANT NOTE: be careful to store it away from children and pets, as it is toxic if eaten in a large dose!

I personally prefer a bit of spice on my biltong, and as such I have gone full South African by using their famed piri-piri pepper as the source – you can buy an excellent version here. While biltong is never smoked, I do like a slight touch of smoky flavor – which I create by using Icelandic birch-smoked salt! Grab it here, this stuff is AMAZING!

Citizens, set your tastebuds to DEFCON 2 – this is truly an amazing snack that Americans NEED to try and enjoy – it’s not hard to make, is delicious, good for you and represents the gustatory soul of South Africa – I hope you see fit to try it ASAP! For dessert, trust in me when I say that few things are better or more apropos here than a South African milk tart! 😀