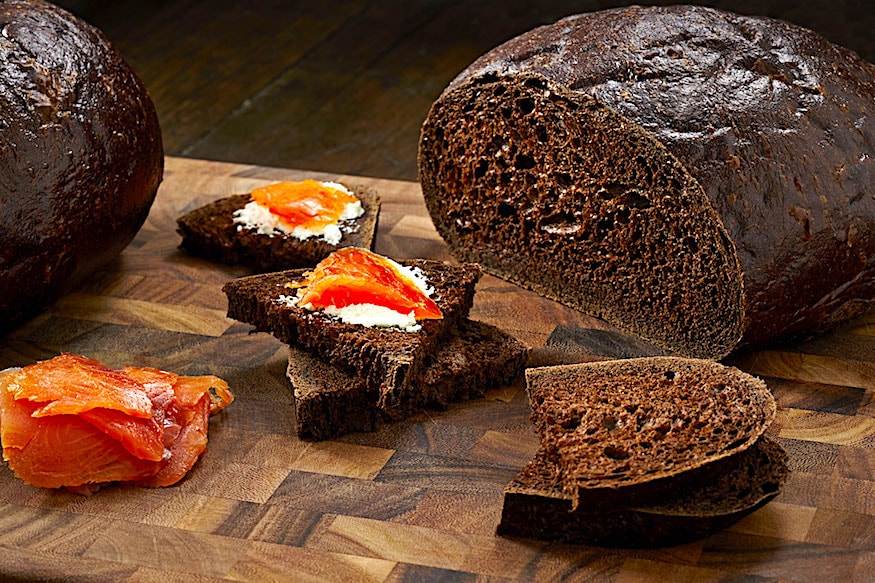 My Citizens, your beloved leader – The Omniscient TFD! – is on a mission to preserve the finest old bread recipes and this is one of the oldest and the best! 🙂

Pumpernickel is a typically heavy, slightly sweet rye bread traditionally made with sourdough starter and coarsely ground rye. It is often made today with a combination of rye flour and whole rye berries.

At one time it was traditional peasant fare, but largely during the 20th century various forms became popular through delicatessens and supermarkets. Present-day European and North American pumpernickel differ in several characteristics, including the use of additional leaveners, and, in North America, coloring and flavoring agents, the addition of wheat flour, higher baking temperature, and a dramatically shortened baking time.

Pumpernickel has been long associated with the Westphalia region of Germany, first referred to in print in 1450. Although it is not known whether this and other early references refer to precisely the bread that came to be known as Pumpernickel, Westphalian pumpernickel is distinguished by use of coarse rye meal and a very long baking period, which gives the bread its characteristic dark color. Like most traditional all-rye breads, pumpernickel is traditionally made with an acidic sourdough starter, which preserves dough structure by counteracting highly active rye amylases. That method is sometimes augmented or replaced in commercial baking by adding citric acid or lactic acid along with commercial yeast.

Traditional German Pumpernickel contains no coloring agents, instead relying on the Maillard reaction to produce its characteristic deep brown color, sweet, dark chocolate, coffee flavor, and earthy aroma. To achieve this, loaves are baked in long narrow lidded pans 16 to 24 hours in a low-temperature (about 120 °C or 250 °F), steam-filled oven. Like the French pain de mie, Westphalian pumpernickel has little or no crust. It is very similar to rye Vollkornbrot, a dense rye bread with large amounts of whole grains added.

While true Pumpernickel is produced primarily in Germany, versions are popular in the Netherlands, under the name roggebrood, where it has been a common part of the diet for centuries, and in Denmark where rugbrød is a staple. German pumpernickel is often sold sliced in small packets in supermarkets, where it may be paired with caviar, smoked salmon, sturgeon, and other expensive products on an hors d’oeuvres tray.

A separate pumpernickel tradition has developed in North America, however, where coloring and flavoring agents such as molasses, coffee, and cocoa powder are added to approximate the shades and taste of traditional German pumpernickel. Bakers there often add wheat flour to provide gluten structure and increase rising and commercial yeast to quicken the rise compared to a traditional sourdough. As a result, and for economic reasons, they tend to eschew the long, slow baking characteristic of German pumpernickel, resulting in a loaf that but for color otherwise resembles commercial North American rye bread.

The philologist Johann Christoph Adelung states that the word has an origin in the Germanic vernacular where “pumpern” was a New High German synonym for being flatulent, and “Nickel” was a form of the name Nicholas, commonly associated with a goblin or devil (e.g. “Old Nick”, a familiar name for Satan), or more generally for a malevolent spirit or demon.

Hence, pumpernickel means “devil’s fart”, a definition accepted by the publisher Random House, and by some English language dictionaries, including the Merriam-Webster Dictionary. The American Heritage Dictionary adds “so named from being hard to digest”. A variant of this explanation is also given by the German etymological dictionary Kluge that says the word pumpernickel is older than its usage for the particular type of bread, and may have been used as a mocking name for a person of unrefined manners (“farting Nick”) first. The change of meaning may have been caused by its use as a mocking expression for the (in the eyes of outsiders) unrefined rye bread produced by the Westphalian population.

Citizens, you will delight in this rustic loaf and it makes for a spectacular deli sandwich – I truly hope you will try this unmatched recipe, which includes the European baking tradition of using “Altus”, actual bread mixed in the dough to aid in texture and flavor.