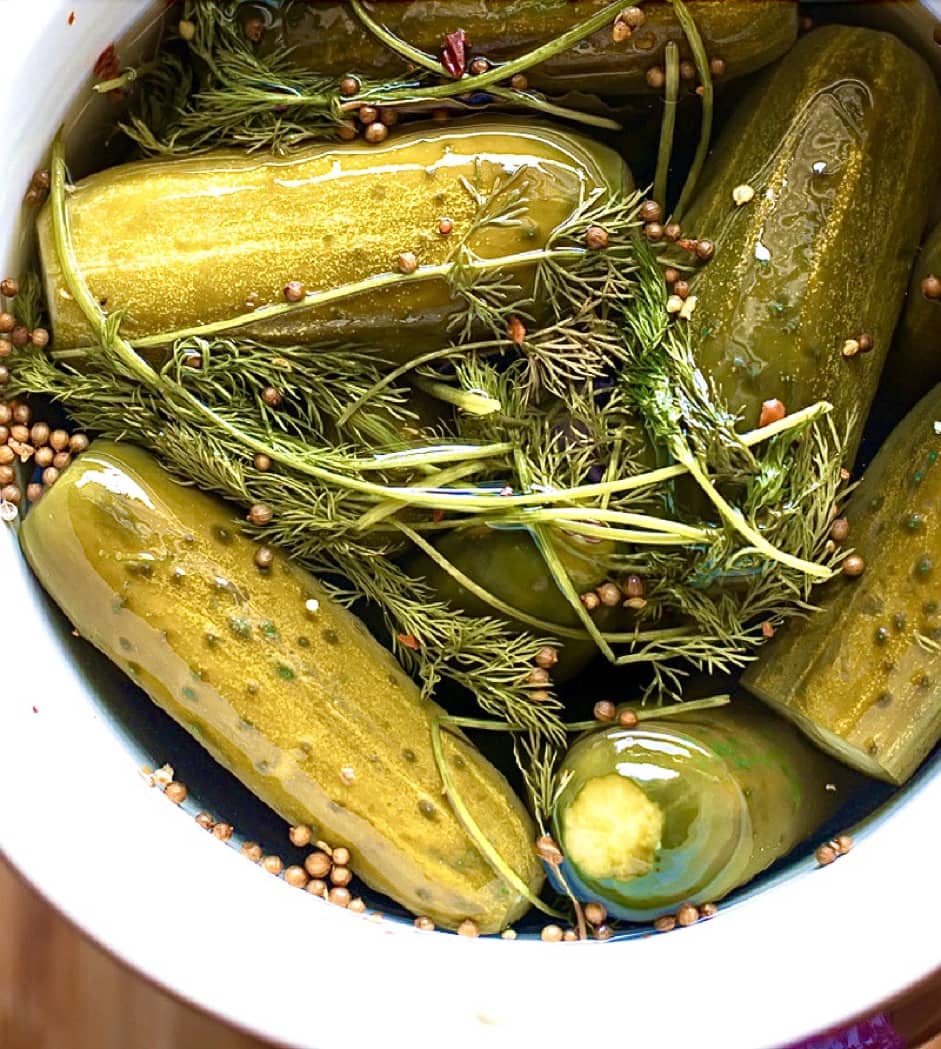 Citizens – I originally thought that my personal, legendary recipe for kosher dill pickles would be one of 3 “dead man” recipes I have created, meaning I would only share them on my shuffling off of this mortal coil.

That said, I’ve relented and here is my version of AUTHENTIC kosher dill pickles, which is both superlative and truly a taste of deli history! It reflects centuries of Old World pickling heritage and has zero compromises, with 100% authenticity!

As an aside – the true old-school secret to the best pickles made in commercial quantities is to mature them in a barrel that was used to ship olives from the Mediterranean – it adds something that can never be replicated… Lacking such an outré item, my scaled-down recipe works VERY well indeed – enjoy!  

Brined pickles are prepared using the traditional process of natural fermentation in a brine which makes them grow sour. There is no vinegar used in the brine of naturally fermented pickled cucumbers. The fermentation process is entirely dependent on the naturally occurring Lactobacillus bacteria that normally cover the skin of a growing cucumber. Since these are routinely removed during commercial harvesting/packing processes, traditionally prepared pickles can only be made from freshly harvested cucumbers.

A “kosher” dill pickle is not necessarily kosher in the sense that it has been prepared in accordance with Jewish dietary law. Rather, it is a pickle made in the traditional manner of Jewish New York City pickle makers, with generous addition of garlic and dill to a natural salt brine.

In New York terminology, a “full-sour” kosher dill is one that has fully fermented, while a “half-sour,” given a shorter stay in the brine, is still crisp and bright green. Dill pickles (not necessarily described as “kosher”) have been served in New York City since at least 1899. They are not, however, native to New York; they have been prepared in Russia, Ukraine, Germany and Poland for hundreds of years.

Typically, small cucumbers are placed in a glass or ceramic vessel or a wooden barrel, together with a variety of spices. The container is then filled with cooled, boiled water and kept under a non-airtight cover (often cloth tied on with string or a rubber band) for several weeks, depending on taste and external temperature. Traditionally stones, also sterilized by boiling, are placed on top of the cucumbers to keep them under the water. The more salt is added, the more sour the cucumbers become.

Since they are produced without vinegar, a film of bacteria forms on the top, but this does not indicate they have spoiled, and the film is simply removed. They do not, however, keep as long as cucumbers pickled with vinegar, and usually must be refrigerated. Please do remember this as you decide to prepare these, whether en masse or in smaller Mason jars.

It’s ALWAYS preferable to use salt (the ancient Jewish shtetl way) instead of vinegar for any form of pickling, as vinegar will brown the pickle faster as well as souring it more quickly – issues that are especially relevant for making half-sours. So, of course, this is the time-hallowed way we shall make our authentic full-sour pickles today!

First off, if you are going to be making pickles in quantity and with any frequency, you REALLY want a ceramic pickling crock – this lead-free pottery crock solution is my go-to.

Brining is tricky – added to 1 quart of water, each tablespoon of salt (weighing about .6 ounce) adds 1.8% brine. So 2 tablespoons of salt in 1 quart of water yields a 3.6% brine, 3 tablespoons yields 5.4%, and so on. Low-salt pickles, known as ‘half-sours’ in deli speak, are made with a roughly 3.5% salt solution, which is the salinity of seawater. Full sours are typically fermented in a 5.4% brine, give or take.

My seemingly eccentric use of tree leaves appears on the surface to be totally bizarre, but it serves a secret purpose! The oak or cherry leaves contribute some most necessary tannic acid, which helps to keep the pickles crunchy! The pickle masters of old knew this. Alternatively, you can also use black tea leaves to provide the same tannic acid, but oak or cherry leaves are the authentic choice for these pickles!

Unwaxed Kirby cucumbers are the only type that will work for pickling, so be sure to use these – farmers markets are your best bet.

My optional use of the heel of a sour rye bread with caraway seeds is an old-school pickle merchant trick, rarely shared – it provides a kickstart for the right yeasts and bacteria that will result in a mildly fermented brine, similar to the Russian Kvass, and will give a subtle, mildly fermented flavor to the pickles if used.

In making these pickles, it is important that you NOT use store-bought mixed pickling spices, because the cinnamon, cloves, and other sweetly aromatic spices in them will detract from the true, clean flavor of these pickles.

Also, it is important that you NOT use iodized salt in the process, as that will leave a bitter aftertaste.

Bring TFD, I strongly encourage all of TFD Nation to enjoy this at your earliest opportunity, perhaps with a delicious and crazily unique hybrid ‘Jewish’ sandwich’ from the Catskills!

I hope you will give these delicious pickles a try, Citizens – they are a very important part of my Jewish cultural and gastronomic heritage and I am confident you will find them worthy of your own enjoyment as well! 😀