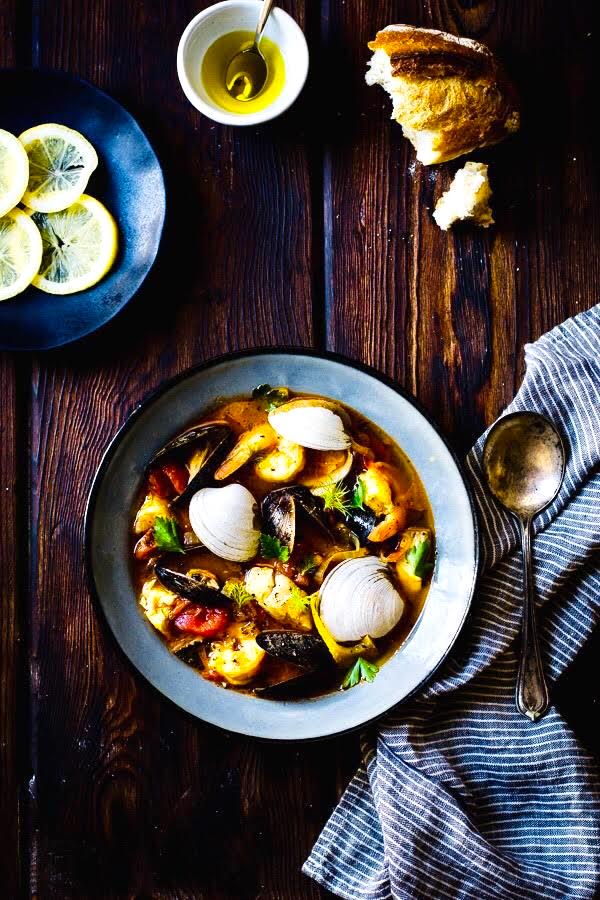 , the antiquarian culinary historian that is the mighty TFD has been collecting recipes since my early high school days, going back to the early 80’s! Yes, I predate the public Internet and the hundreds of recipes I photocopied, ripped out of magazines and clipped from newspapers are still to this very day sitting in a large box in my office.

It is now time to start unlocking these so-called “lost recipes”! It’s true, the vast majority are nowhere to be found on the Internet, and it is long overdue to return them to the world!

My first recipe is from 1989 – published in the New York Times Sunday Magazine (back when the recipes they posted were still designed to recreate the complexities of the actual restaurant dish, and weren’t ‘dumbed down’ for home cooks) by legendary seafood chef Rick Moonen when he was in charge of one of NYC’s finest piscine restaurants.

It may look laborious. To simplify, chef Moohen suggests making the consomme a day in advance and refrigerating it, or up to one month in advance and freezing it. 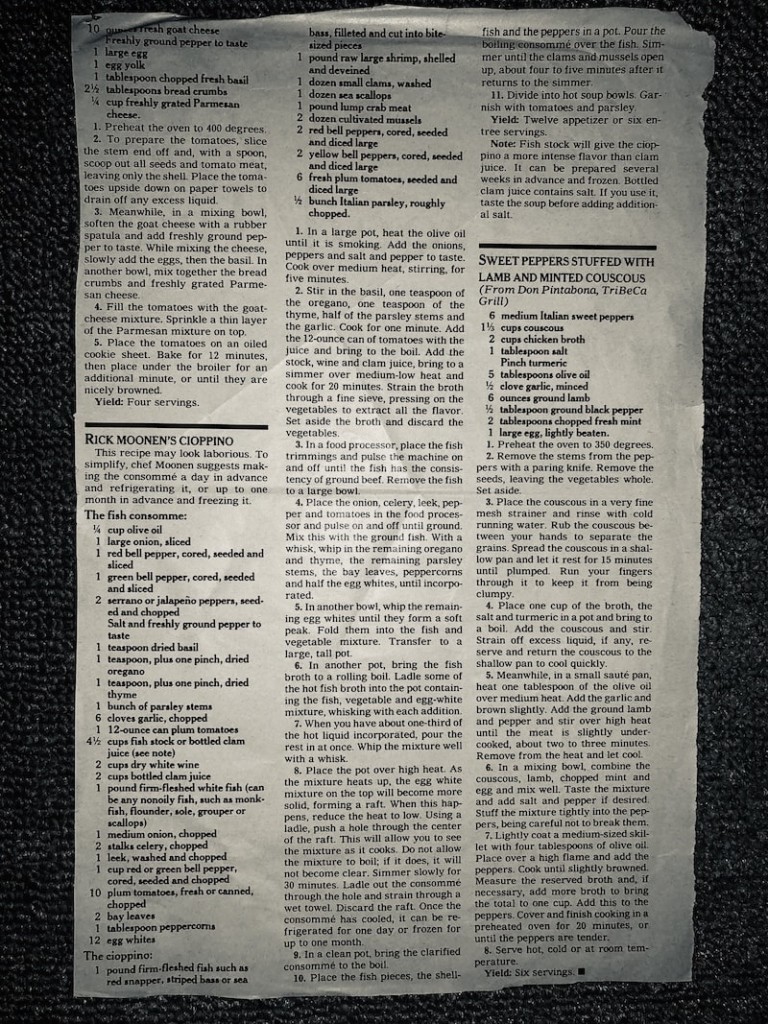 Cioppino is a fish stew originating in San Francisco, California. It is an Italian-American dish, and is related to various regional fish soups and stews of Italian cuisine.

Cioppino is traditionally made from the catch of the day, which in San Francisco is typically a combination of Dungeness crab, clams, shrimp, scallops, squid, mussels, and fish all sourced from salt-water ocean; in this case the Pacific. The seafood is then combined with fresh tomatoes in a wine sauce.

The dish can be served with toasted bread, either local sourdough or French bread. In the dish, the bread is as a starch, similar to a pasta. It is freely dipped into the ample quantity of sauce. The bread then absorbs, holds, and modulates the flavorful yet slender (watery) sauce; that is to be freely “sopped up” by the heavy, full bodied breads. The bread’s consumption, after dipping into the sauce, prolongs the flavors on the palate when eating the dish.

Cioppino was developed in the late 1800s primarily by Italian immigrants who settled in the North Beach neighborhood of San Francisco, many from the port city of Genoa. When a fisherman came back empty handed, they would walk around with a pot to the other fishermen asking them to chip in whatever they could. Whatever ended up in the pot became their Cioppino. The fishermen that chipped in expected the same treatment if they came back empty handed in the future. It later became a staple as Italian restaurants proliferated in San Francisco.

The name comes from ciuppin which is the name of a classic soup from the Italian region Liguria, similar in flavor to cioppino but with less tomato and using Mediterranean seafood cooked to the point that it falls apart.

The dish also shares its origin with other regional Italian variations of seafood stew similar to ciuppin, including cacciucco from Tuscany, brodetto di pesce from Abruzzo, and others. Similar dishes can be found in coastal regions throughout the Mediterranean, from Portugal to Greece. Examples of these include suquet de peix from Catalan-speaking regions and bouillabaisse from Provence.

Generally the seafood is cooked in broth and served in the shell, including the crab, which is often served halved or quartered. It therefore requires special utensils, typically a crab fork and cracker. Depending on the restaurant, it may be accompanied by a bib to prevent food stains on clothing, a damp napkin, and a second bowl for the shells. A variation, commonly called “lazy man’s cioppino,” is served with shells pre-cracked or removed.

Chef Moonen’s version is quite upscale, using a classically-clarified fish consommé and seafood more suited to NYC waters. It is delicious, though atypical of the classic versions found here in San Francisco. Well worth trying, ! 🙂