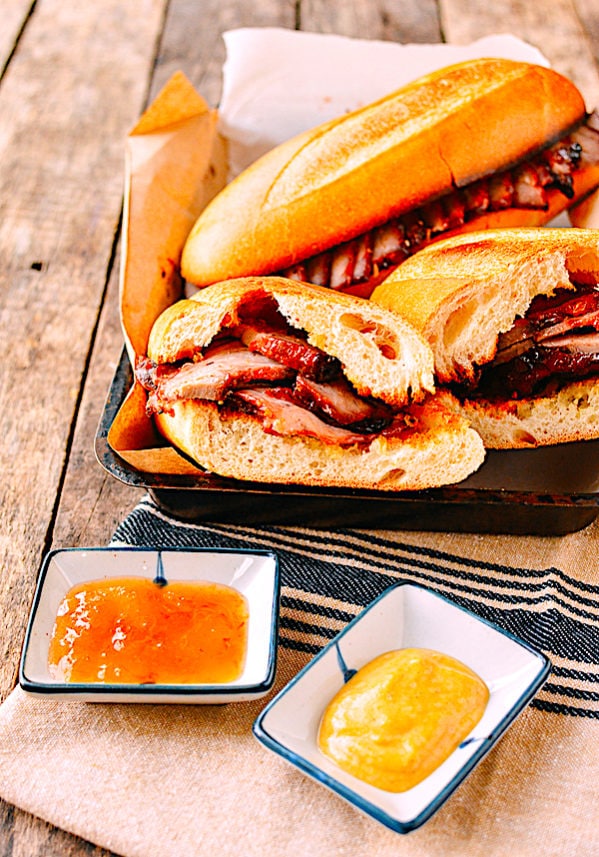 Citizens, today I am going to share what has to be one of the most bizarre (and delicious!) sandwiches ever to emerge from the fever dreams of a Chef who quite clearly went off his/her meds.

Yes, this is a fusion of Chinese and Italian cuisine with deep Jewish roots despite its use of pork – dating back nearly 70 years to a time when the Jewish ‘Borscht Belt’ in the Catskills was in full and epic swing! It was in this era, popularized by the wonderful TV show The Marvelous Mrs. Maisel, that the RPG – the Roast Pork and Garlic (RPG) Sandwich – was born!

So – let’s talk about this ethnically-confused sandwich, shall we?

I was reminded about this long-forgotten sandwich in the ‘Save the Deli’ group on Facebook, where my friend Jason (the founder of the awesome food site eGullet) was reminiscing about the sandwich and it sparked a dormant memory for me. I actually ate this at the legendary Jewish resort in the Catskills (known as Kutsher’s) when I was a very young boy!

The RPG is a truly unique sandwich from the Catskill Mountains, located a couple of hours drive north of New York City – a region very popular with NYC Jews for Summer vacations back in the day. Combining Chinese roast pork, ‘duck sauce’ and Italian garlic bread, it gained a cult following among many Jewish (and non-Jewish) New Yorkers in the 1950s and ’60s.

This is an exquisite example of Jewish crossover food, “fusion food” these days. It was a dish that made first- and second-generation Jews of the 1950s, Jews who no longer abided by the kosher laws, feel like they were truly Americans as well as urbane and sophisticated. Imagine what a scandal it was to observant parents and grandparents, what a delicious act of defiant assimilation it was, to eat Chinese roast pork on Italian garlic bread.

The RPG was invented in the Catskills and brought back to Brooklyn where, today, substituting roasted veal for the trayf meat, the sandwich survives in kosher delicatessens in Brooklyn and Queens. (It is particularly well done at Adelman’s, a delicatessen on King’s Highway and Ocean Avenue in Brooklyn.) With pork, it is also a hot item in diners on the South Shore of Long Island, where Jews from Brooklyn and Queens moved decades ago.

By all accounts, the sandwich was created sometime in the mid-1950s at Herbie’s in Loch Sheldrake, New York. It was the most popular Jewish-style deli-restaurant in the area.

According to Freddie Roman, the Borscht Belt comic who years later starred in the nostalgia show Catskills on Broadway, Herbie’s was where all the entertainers would gather after their last shows at the hotel nightclubs. “Specifically for that sandwich,” says Freddie. “And everyone else had to eat what the celebrities ate.”

Herbie’s sandwich of Chinese Roast Pork on Italian Garlic Bread was so popular among the summer crowd in “The Mountains,” that it was imitated back in “The City.” I remember when it was introduced at Martin’s and Senior’s, two fabulously successful, middle-class family restaurants on Nostrand Avenue in Sheepshead Bay, Brooklyn.

In just a few years, it seemed Chinese roast pork on garlic bread became so popular in the southern tier of Brooklyn communities — from Canarsie through Mill Basin to Bay Ridge — that every diner and coffee shop made it. The sandwich even made it to Manhattan in the 1960s, at a place called The Flick, an ice cream parlor and casual restaurant near the then-new movie houses on Third Avenue.

Eventually, Herbie’s, which closed in Loch Sheldrake only several years ago, opened Herbie’s International on Avenue N in the Flatlands section of Brooklyn, where many of its Borscht Belt customers lived.

It, too, was a well-priced family restaurant, serving, as its name was meant to imply, a little of this and a little of that from all over. But, as would be expected in this neck of the woods, “international” was really limited to red-sauced southern Italian, Cantonese-American Chinese, and a few specialties of the Yiddish kitchen. Maybe they served French crêpes, too.

Herbie’s original RPG sandwich was undoubtedly made with something other than real butter. Who knows what grease Herbie used. And the garlic flavor may have come from garlic powder, not fresh garlic. There are garlic spreads available in some supermarkets that probably come pretty close to the original flavor. If making the sandwich with pork, you might as well use butter and chopped fresh garlic.

Of course, to make it a kosher meat sandwich (using veal), the fat would have to be vegetable-oil based, like olive oil. If you are making a kosher sandwich with veal, using olive oil and chopped garlic not only makes it kosher but also more contemporary. In that case, leave off the Chinese duck sauce, too, and douse the meat with balsamic vinegar.

There should be a certain “white bread” quality to the roll with either version. The duck sauce used to flavor the meat is an apricot-based, sweet condiment; Saucy Susan is a popular brand.

My Rabbi will assuredly have words with me for even daring to call the RPG ‘Jewish’ – but the facts are the facts. Since I do not keep Kosher, I can enjoy this RPG sandwich with ease – my friends who follow Kashrut can follow the instructions in the last paragraph of my excerpted post from eGullet to make it ‘their way’.

Some old-timers say the RPG should not be served with Chinese mustard – I respectfully disagree, but feel free to leave it off if you’re a purist. I also elevate the RPG recipe by using my own ultimate version of garlic bread, grab the recipe here. Of course, I strongly recommend using homemade ‘duck sauce’ – my recipe again is unmatched and may be found here.

The char siu, or roast pork needs to be the star here – get it from the best Chinese restaurant (or even better from a Chinese delicatessen) you can find, preferably in one whole piece so you can slice it thinly, as opposed to the thick slices it normally comes in.

Citizens, this Frankenstein RPG sandwich is truly delicious – enjoy it watching an episode of Mrs. Maisel and remember a bygone era of Jewish history in NYC!