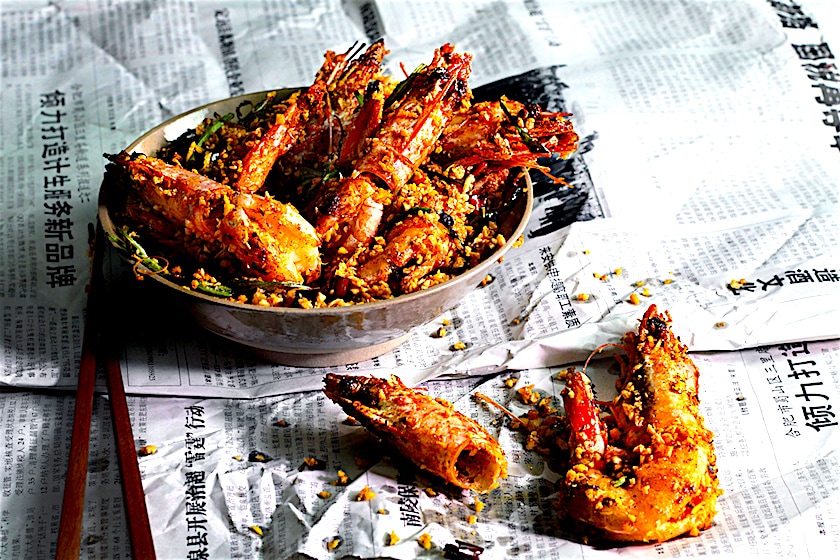 Citizens, this just might be one of my favorite shrimp recipes of all time! 😀

In Hong Kong, a typhoon shelter is in the form of a bay or a cove, with a narrow opening for access. A typhoon shelter, as its name suggests, is used by small to medium ships as a shelter against gale force winds and rough seas during a typhoon strike.

Typhoon shelter seafood, an iconic dish now served in many Hong Kong Chinese restaurants, is believed to have originated from the people living in these typhoon shelters. It is commonly prepared with crab meat or shrimp, served under a veritable mountain of fried garlic, scallion and red chili.

Before the 1990s, there was a fairly large population living on boats in typhoon shelters. Many of them were the descendants of fishermen or boat people. They developed a distinct culture that is different from the mainstream cultures found in Hong Kong. The culture is, by many definitions, a fully developed one, with its own language, wedding rituals and other things such as food, songs and superstitions.

The life and culture of the descendants of these fishermen has often been glamorized, and effectively hid the truth of the extreme poverty that existed among these people. That said, their cuisine became the stuff of Hong Kong legend!

Citizens – this dish is supremely savory and redolent with enough garlic to chase away the undead for at least a year! 😉 My favorite brand of fermented black beans are these. I would personally enjoy these meal with some savory potstickers.