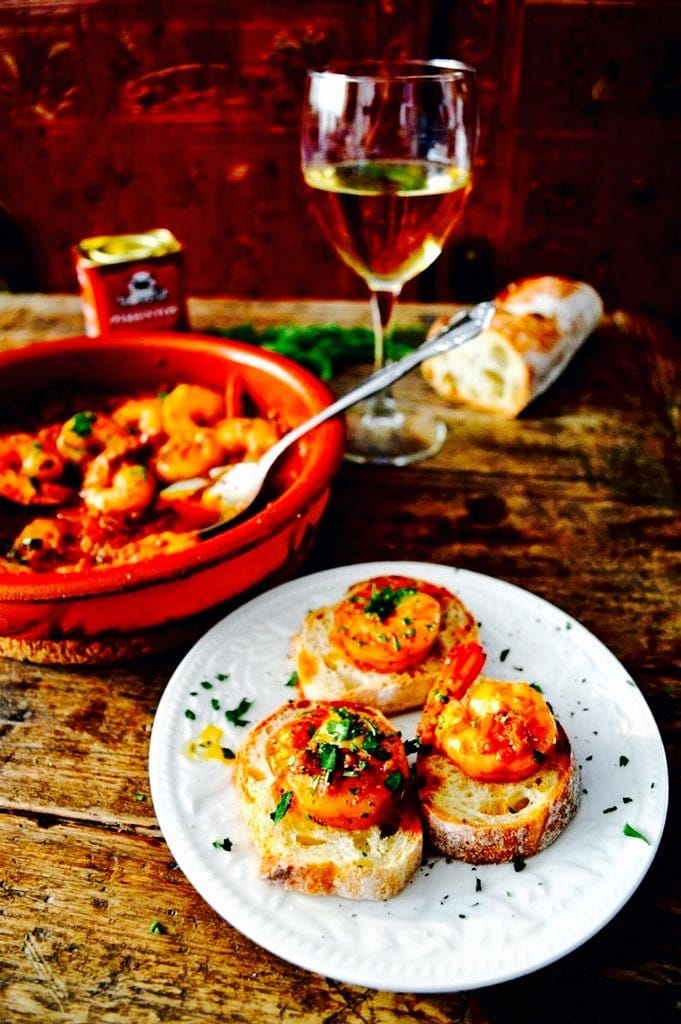 Citizens! Gambas al ajillo (garlic shrimp) is perhaps the most popular Spanish tapa served in Spain, found principally in the south and center of the country. The primary ingredients In this simple but incredibly delicious recipe are shrimp, garlic and olive oil, but there are many variations.

According to legend, the tapas tradition began when king Alfonso X of Castile recovered from an illness by drinking wine with small dishes between meals. After regaining his health, the king ordered that taverns would not be allowed to serve wine to customers unless it was accompanied by a small snack or “tapa.”

The Joy of Cooking notes an alternate origin: the original tapas were the slices of bread or meat which sherry drinkers in Andalusian taverns used to cover their glasses between sips. This was a practical measure meant to prevent fruit flies from hovering over the sweet sherry.

The meat used to cover the sherry was normally ham or chorizo, which are both very salty and activate thirst. As a result of this, bartenders and restaurant owners began creating a variety of snacks to serve with sherry, thus increasing their alcohol sales. The tapas eventually became as important as the sherry.

My version of this classic gambas recipe includes a Chinese technique used to keep the shrimp firm and crunchy, as well as the addition of both a highly-reduced Sherry and thyme (as well as liberal amounts of Aleppo pepper flakes in remembrance of the strong Moorish influence on Spain), plus a touch of Spanish smoked paprika.

I also adopt the classic Spanish method of mashing some garlic with the hot pepper and paprika to truly release and express all of the flavors.

Huge kudos to the magnificent food blog Serious Eats that came up with the base recipe for gambas that I used to create my version of this classic tapa!