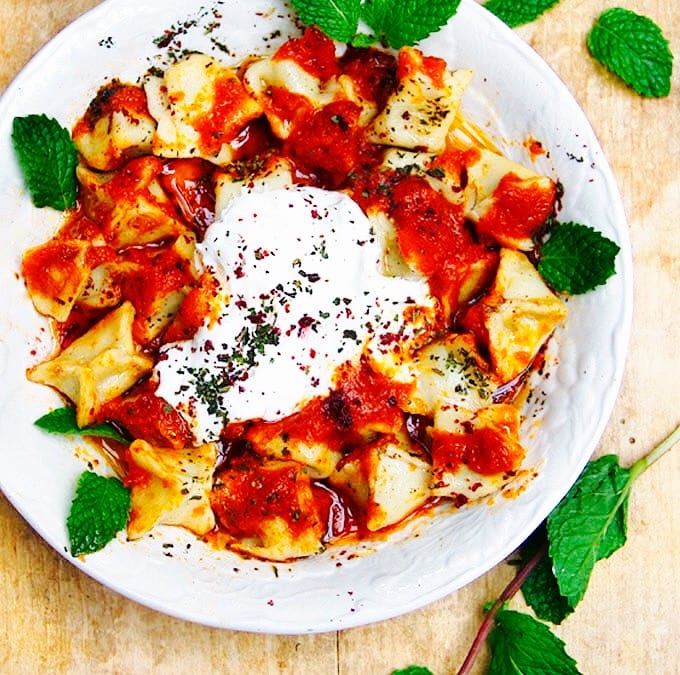 Citizens, today we visit the proud and magnificent cuisine of Turkey with one of their finest dishes! 🙂

Turkish Manti are basically the ancestors of tortellini and have been made in Turkey since at least the 1400’s, and were in fact a favored treat of the Sultans of the Ottoman Empire!

While a Turkish tradition, manti actually have their origins with the Mongol Empire. The recipe was carried across Central Asia along the Silk Road to Turkey by migrating Turkic and Mongol peoples.

Turkic and Mongol horsemen on the move are supposed to have carried frozen or dried manti, which could be quickly boiled over a campfire. In Turkey, manti are still sometimes Tatar böreği (Tatar bureks), which indicates its relation to these nomadic peoples.

In contrast to the Central Asian varieties of manti, those made in Turkey are usually boiled or baked (sometimes both) rather than steamed and tend to be small in size.

A mid-15th-century Ottoman recipe has survived, with the manti filled with pounded lamb and crushed chickpeas, steamed, and served topped with yogurt mixed with crushed garlic and sprinkled with sumac.

In modern Turkish cuisine, manti are typically served topped with yogurt and garlic, and further spiced with a red pepper and olive oil sauce, and topped with ground sumac and/or dried mint by the diner.

Although there are many different variations of manti in terms of shape and way of serving, the most praised type of Turkish manti is known as Kayseri mantisi, originally from Kayseri, an Anatolian city.

Kayseri mantisi are tiny and served with yogurt, oil (caramelized with tomato or pepper paste) and seasonings. It can also be served with the water it was boiled in, and often in Kayseri it is consumed as a soup prior to the main dish.

In Kayseri when a couple is engaged to be married, the mother of the groom visits the bride’s house and during this visit the bride should prepare manti for her prospective mother-in-law. The smaller the manti dumplings are, the more the bride is considered to be skillful in the kitchen.

Traditionally the dumplings prepared for the prospective mother-in law are supposed to be so small that 40 of them can be fit into one spoon!!!

Citizens, my manti are supremely delicious and totally authentic – but in the interest of sanity, they are of a size that are easily made by less-experienced home chefs. You can buy urfa biber pepper flakes here and Turkish red pepper paste here.