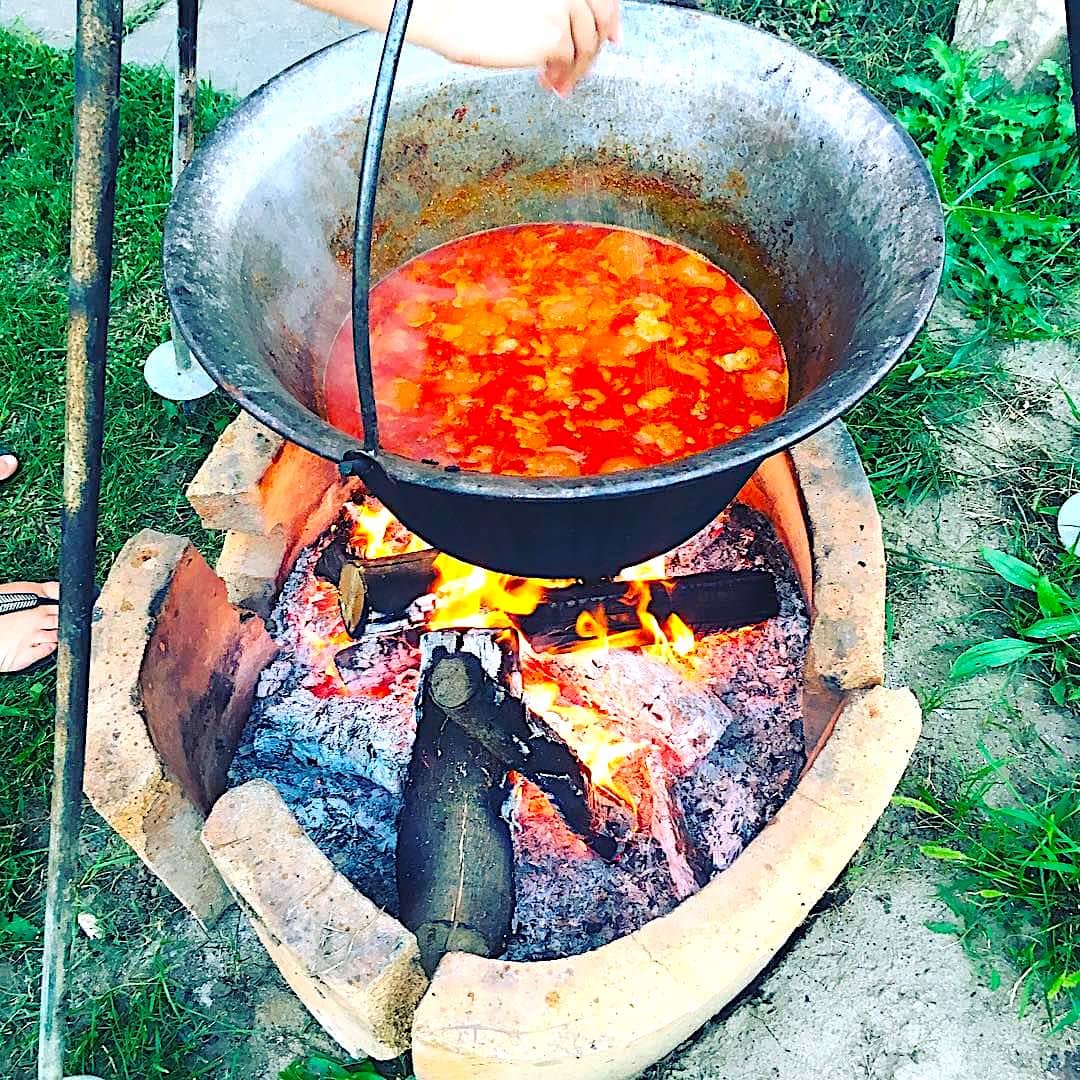 My Citizens – I hope your Summer has been convivial, and filled with epic outdoor excursions worthy of TFD Nation and your families! I must confess, however, that I – the Autumnal One who ALONE is your Suzerain! – am glad that we are now coasting into my favorite Fall season where crisp weather demands an outdoors stew feast over an open fire!

Of all the recipes I know designed for outdoor cooking, none is as mighty and deserving of your attention as Bogrács Gulyás, the hearty meat and dumpling stew from Hungary (and also enjoyed by Hungarians living in the Carpathian mountains of Romania)!

As eruditely written up at magyarvagyok.hu:

A special episode in our gastronomy is cooking over open fire, which we call bográcsozás. The name comes from bogrács, the kettle we use to cook the meals in (TFD Note – in Romania, it’s called a ceaun). Even though it takes quite a lot of practice and preparation, the final result is divine and incomparable. Several of our one-pot dishes originate from this tradition of outdoor cooking.

The use of the kettle can be traced back to the nomad horse-cultures. The early medieval Eurasia can be divided into two gastronomic parts. While the region between the Far East and the Black Sea was dominated by cooking methods, the westward region from the Black Sea was dominated by frying, roasting methods, especially in the sacrificial ceremonies.

The traces of these traditions can still be found in these regions, for instance, the cooking, steaming, roasting methods in the East.

And the most obvious tool for outdoor cooking was/is the kettle that can be hung over the fire. The ancestor of today’s bogrács, the earthen kettle was brought to the Carpathian Basin by the first Magyars. It was the most common pot of 10th-13th century Hungarian pottery. Based on the finds of archaeologists, the traditions of its making originate from the Don region.

The word bogrács has Ottoman-Turkish roots (bakraç – copper kettle) even though it’s only used from the 1700s. The metal kettle also appeared in the late medieval times, when economies, societies, settlement structures were changed by the norms of feudalism. Some written documents from 1420 say that the iron kettle belonged to the serf house.

The cast-iron kettles spread in the middle of the 18th century, thus replacing copper kettles.

The shape of the Árpád era earthen kettles was determined by their usage. The walls which grew narrow inwards were created so that the fire wouldn’t burn the rope that held the kettle. The shapes of the kettles changed with time. For instance, the ones used in the Great Hungarian Plain and Transdanubia were deep bowls that had splayed edges, except for the pear-shaped iron kettles used in the southern region of Transdanubia. The kettles used in Transylvania were hemispheric.

Everything starts with choosing the dish you’d like to make in the kettle. It could be anything from onions & beans, goulash, fish soup to stews.
Prepare the dishes and place them near at hand. Get some water, a kitchen towel and a big wooden spoon (and some helping hands maybe?).
Choose a kettle that fits your desired meal. Ask professionals or do some research, because there are plenty of options.
Choose an outdoor spot that’s suitable for making fire. Make a circle with stones, and then make the fire itself.
Have fun, enjoy the company of your friends, family, eat like it’s the end of the world, and make unforgettable memories 🙂

Bogrács can still be made the old way, in a copper cauldron with a tripod base – there is one source I found in Europe (that ships!) who still make them by hand the old way – you can get them here. If you prefer to use an iron kettle, you certainly can’t go wrong with any of the versions found here.

As to the fire – follow the directions here to make a perfect fire for cooking!

As this is a goulash variant (my indoor version may be found here), it does require goulash seasoning paste – fortunately, the best version may be ordered here in the United States from here. Since this is served outdoors and with beer, I have called for beer (not wine like the indoor version) in the ingredients list. Unlike goulash made indoors, the outdoor recipe calls for hearty dumplings as opposed to the tiny pasta bits used in the other version.

As this is also popular in the Transylvania region of Romania, I’ve also added in a LOT of garlic, as the region is famous for it (forget the vampires, Transylvanian garlic is where it’s at!). The Hungarian version would either use just a few cloves or none at all. Leave it out or drastically reduce it for a more Hungarian version.

Citizens, if you are going out on a camping or hunting trip into the woods this Autumn, you MUST try this Bogrács recipe, as it is truly delicious and special – make it in quantity and ONLY outdoors, as the dish was designed. You will thank me, I promise!