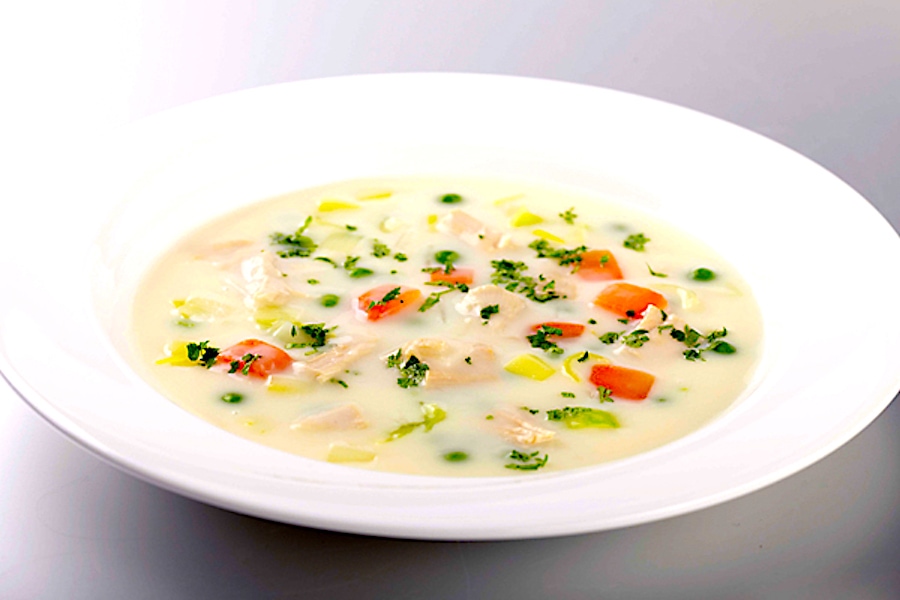 Citizens, the bellicose Bodhisattva who alone reigns supreme amongst the culinary pantheon – the glorious manifestation of the divine TFD! – has a long-standing and deep appreciation of the many delicious forms that soup can take! This Dutch treat (since I teach and you make) is perhaps the most comforting and delicious form of the mighty cream of chicken soup!

Queen’s soup is a very rich and creamy white, bound chicken soup, brightened up with a few peas and pieces of carrot. This Cream of Chicken Soup is actually triple-thickened: 1 – With the pureed chicken meat; 2 – With a roux; 3 – Just before serving with cream and egg yolk.

As noted on the amazing and scholarly food history site coquinaria.nl by Christianne Muusers:

Since the holiday is celebrated with a lot of outdoor festivities and Juliana’s successor Beatrix was born on 31 January, she decided to honour her mother by making her birthday the permanent date for Queen’s Day. However, in 2013 she ceded the throne to her son Willem-Alexander, and now we celebrate King’s Day on his birthday, which is 27 April.

All those outdoor feasts and fairs are accompanied by food. A lot of the served food and drinks are orange, since that is the national colour, almost more so than the red-white-blue of the Dutch flag. But there is also a cream-coloured soup that is served: Queen’s soup, or ‘koninginnesoep’ as we say in Dutch. The version that is served on the streets during Queen’s Day or King’s Day in plastic cups is a far cry away from the French Potage à la Reine that was first served at the table of the nobles in seventeenth century France.

The oldest recipe I have found for ‘potage à la reine’ is from La Varenne, published in Le cuisinier François in 1651 (edition Hyman, see bibliography). It’s a complicated soup, using two different stocks, a concentrated mushroom/fowl stock and almond stock, both using meat stock as base. Later versions of the same pottage in the seventeenth century also combine fowl stock with almond stock.

The almonds give the pottage its typical cream colour, there’s no cream used in the soup. In a French cookbook from the end of the nineteenth century the ‘potage à la reine’ has devaluated into a stock with puréed meat of poultry of veal and rice and cream, served with fried bread cubes.

In another Dutch cookbook from the sixties of last century, the Sleutel tot de kookkunst (‘Key to the art of cooking’, see bibliography) from Mia Snelders, Queen’s Soup is a simple chicken stock thickened with roux, with little pieces of chicken meat and finished with an egg yolk and a dash of cream or evaporated milk.

That soup reminds me of the one that my mother used to serve, with green peas and orange carrot cubes as garnish. Maybe these were a faint echo of the garnish with pistachio nuts and pomegranate seeds from centuries ago.

Anyway, that last version is most like the soup which is served in plastic cups on queen’s or king’s day. However, the relation between this soup and the French original was still recognized in 1924, when J.P. Kers publishes a recipe for a soup, thickened with a roux, egg yolk and cream, called ‘Koniginnesoep. Potage à la Reine (Imitatie)’ (Queen’s soup. Potage à la reine (imitation)).

Queen’s Soup already made an appearance in Dutch cookbooks when the Netherlands were still a republic. In my cookbook with recipes from the Royal Library I have included a recipe for this soup from the Hollands, of Neederlands kookboek from 1724, with its partner, King’s Soup.

My version of the recipe is based very closely on hers, but differs with the addition of a whisper of Dutch old-style Genever, which tastes like the out-of-wedlock child of gin and Scotch whisky. It adds a delicious flavor note to the soup, but you don’t have to use it. You can buy my favorite brand here. I also use rainbow carrots for additional color and thyme flowers, which I very much enjoy.

I have every confidence you will love this delicious soup straight from the royal court of the Netherlands, Citizens!