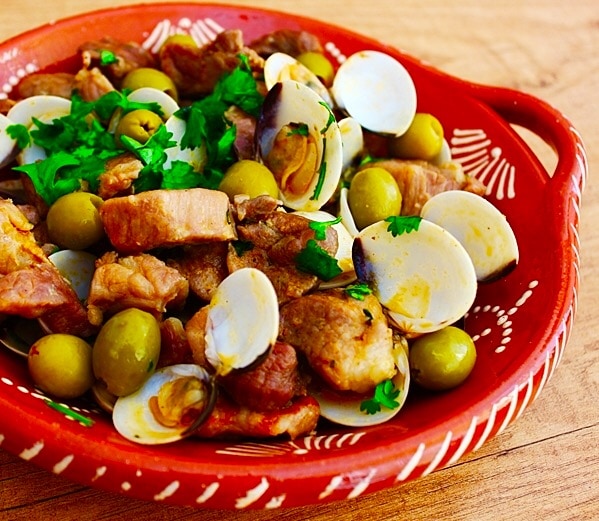 Citizens, Carne de Porco à Alentejana is one of the most traditional and popular pork dishes of Portuguese cuisine. It is a unique combination of seasoned pork and clams, served with potatoes and cilantro.

The recipe is typical of the Algarve region in Portugal, even though the name is Alentejana (from Alentejo). It was added because Alentejo is very known for their pork. Algarve pork however, did not have the same good reputation and the local citizens wanted to increase the national respect for their creation.

In this recipe, pork is marinated for hours in white wine, paprika, chopped garlic, bay leaf, salt and pepper. It is then fried until golden brown, at which point clams are added and cooked for an additional few minutes.

Traditionally this dish is served with cubed fried or baked potatoes. My version of the recipe adds both black and green olives and a bit of pickled vegetables for extra tang as well as some chili flakes for heat.