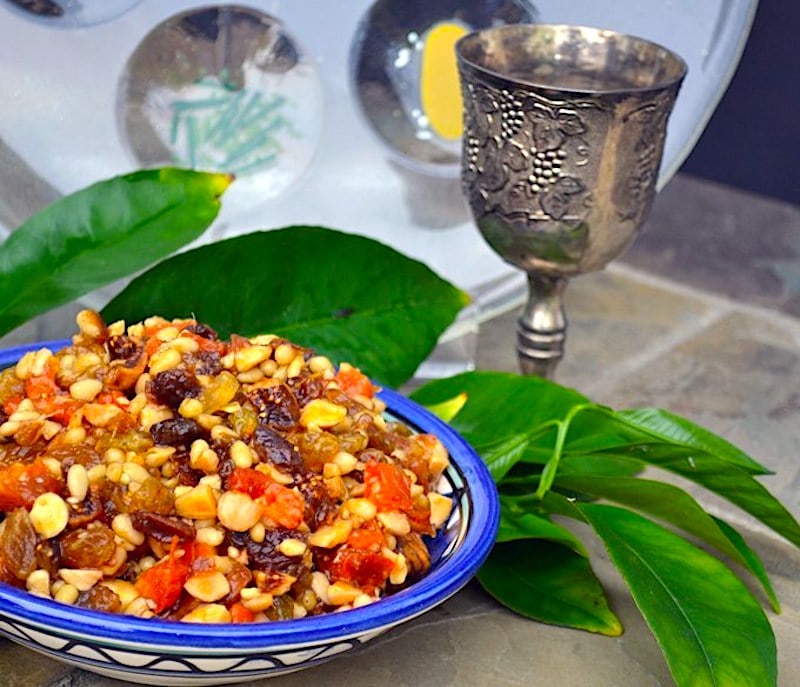 Citizens! Behold in abject fascination the third of our 3 Jewish Passover recipes – and this one is as focused on Pesach as it gets! After all, what is a Passover Seder without charoset, the nut, fruit and alcohol blend that resembles the mortar Jews used to make while slaves in Egypt?

This one is particularly interesting as it has been used by the same family in Italy for over *500 YEARS!*.

Charoset is a sweet paste made of fruits and nuts eaten at the Passover Seder. Its color and texture are meant to recall mortar (or mud used to make adobe bricks) which the Israelites used when they were enslaved in Ancient Egypt as mentioned in Tractate Pesahim (page 116a) of the Talmud. The word “charoset” comes from the Hebrew word cheres — חרס — “clay”.

Charoset is one of the symbolic foods on the Passover Seder Plate. After reciting the blessings, and eating a matzah “Hillel sandwich” combining charoset and maror (bitter herbs), the remainder is often eaten plain, spread on matzah.

Charoset is mentioned in the Mishna in connection with the items placed on the Passover table: “unleavened bread and lettuce and charoset.” Some say it can be traced back to the custom of symposia in ancient Greece, where philosophical discussions were accompanied by drinking large quantities of wine and consuming foods dipped into mixtures of pounded nuts and spices.

This actually makes a lot of sense as the Greek and Roman custom of leaning or reclining to the left while dining was also adopted to remind Seder participants that Jews were now free citizens of the Empire.

Attend in wonder as the history of Jewish Italy is elucidated on breakingmatzo.com:

The history of the Jews in Italy spans more than two thousand years. The Jewish presence in Italy dates to the pre-Christian Roman period. Despite periods of extreme persecutions and expulsions from parts from time to time, the Italian Jewish community has always been resilient and plays an important role in Italian culture. As of 2007, the estimated core Jewish population in Italy numbers around 45,000.

The first documented Jews in Italy were the ambassadors sent to Rome by Judah Maccabee in 161 BCE. When the Jews were expelled from Spain in 1492, many of them found refuge in Italy, where they were given protection by King Ferdinand I of Naples.

Haroset, a symbolic part of the Seder, is essentially a fruit and nut paste representing the mortar used by the Israelites in building the Pyramids while slaves in Egypt. Each family has their own special Haroset recipe reflecting their origins. The Jews of Italy were no exception; Livorno, Milano, and Padua to name a few, all had a distinctive mix of fruits and nuts to symbolize the mortar for their Pesach table.

The first Jewish ghetto was established in Venice in 1516 on the site of an iron foundry. The term ghetto is derived the Venetian dialect ghetar or gettare meaning to cast. Today the ghetto remains intact and in fact, is one of the most interesting sites in Venice; providing valuable historical detail about the diverse Venetian Jewish community through the ages. The current Jewish population of Venice is about 500 with about 30 residing in the actual ghetto.

Venetian Haroset reflects the prominence the city heralded as a commercial port, the importing of goods from mysterious lands. Some of the initial recipes I unearthed used chestnuts ground into a paste, walnuts and pistachios.

This delicious charoset comes from the Luzzatto family of Venice – members of the family have lived in Italy since 1541! Given the status and power of Venice in the 16th century, it is no wonder this uses some (at the time) expensive ingredients. !

A note of caution and an important tip – if you see any pine nuts that are smaller, pale beige nuts with a dark tip – DON’T BUY THEM! They are from a species of pine that will cause your mouth to taste metallic for WEEKS. Details here.