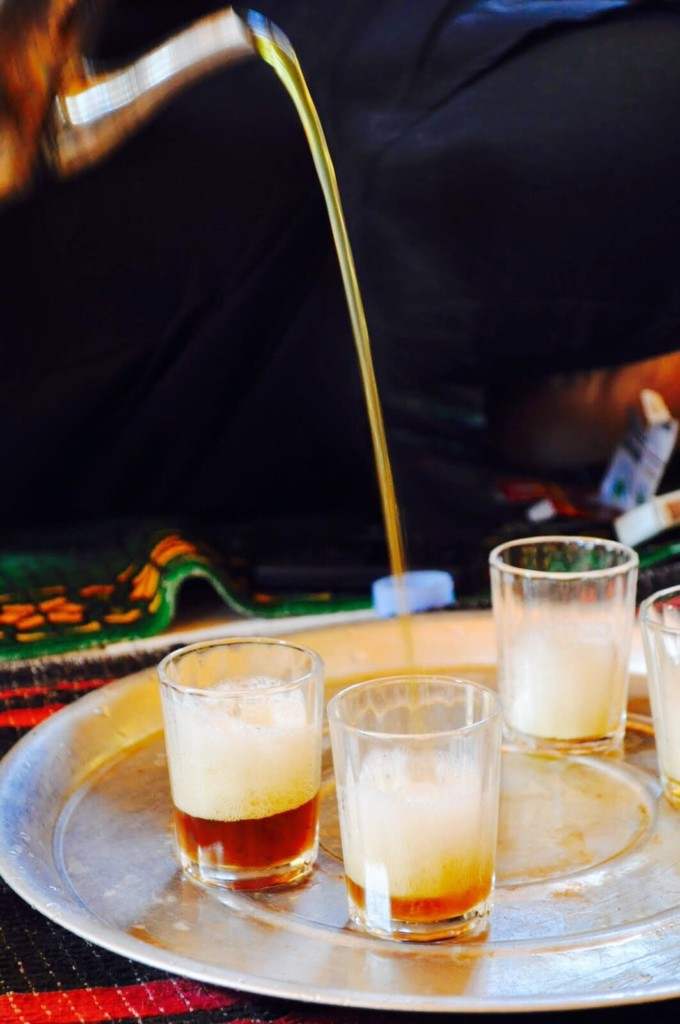 Citizens, the tea ceremony is a worldwide cultural touchstone most famous through its Japanese incarnation but also found in China and throughout North Africa in an area known as the Maghreb, which includes most of the countries in the northwest of the continent.

Mint tea (in Arabic, شاي بالنعناع, shāy bil n’anā’, or more commonly, in dialect, الأتاي, at tay) is central to all social life in the Maghreb. The serving of the tea can take a ceremonial form, especially when prepared for a guest.

The tea is traditionally made by the head male in the family, and offered to honored guests as a sign of hospitality. Typically, at least three glasses of tea are served, and it is considered impolite to refuse it.

There is also tremendous symbolism in the serving of the 3 traditional cups of tea: the first one is bitter like life, the second is sweet like love, and the third is gentle like death.

Many of you may already know that Morocco has a strongly polite and highly-developed tea culture. However, that would be too obvious a posting here at TFD, where we specialize in the unusual and unique.

As such, I decided instead to focus on the little-known North African country of Mauritania, which has elevated tea serving and preparation to a fine art.

You can see an example of what I’m talking about first-hand in this fascinating video:

As noted in a story by NPR:

In the most common preparation, loose, gunpowder tea leaves shaped like pellets go into a kettle with water; the kettle is set over coals on a small stove right next to the tea set to boil. Then, fresh mint and huge hunks of sugar are added to the pot. Some call this tea “Berber whiskey” because of the caffeine and the sugar, and because it’s the closest thing to alcohol many Muslims in the region drink.

But the most distinctive thing about this tea is the way it’s poured. The tea maker begins by pouring the first glass from two to three feet above the tray. He then pours that glass of tea at the same height into the next glass, and then the next, creating a frothy head in each glass. Then the original inch or two of tea goes back in the teapot for more boiling. Before serving, he may taste the tea a few times, seeking optimal flavor.

The motive behind the methodical pouring of tea from glass to glass is to aerate it, generate a flavorful foam and blend the ingredients – especially the sugar. That’s according to Lisa Boalt Richardson, author of The World in Your Teacup, who has researched North African tea traditions.

But though the pervasiveness of the ritual might lead one assume that the Saharawis have been drinking tea this way for millennia, Richardson says it’s a relatively recent tradition.

Chinese green tea first arrived in North Africa in 1854 when British ships en route to Baltic ports were forced to dock in Tangier, Morocco because of the Crimean War. “There were amazing salespeople on this ship, and they convinced the Moroccans to add to green tea to their mint tisanes [herbal infusions.] Then it became a huge tradition,” says Richardson.

The tea is then “cleaned” by adding a small quantity of boiling water, that is poured out after one minute (this lessens the bitterness of the tea), this process may be repeated more than once.

Fresh mint and sugar are added (amounts vary; approximately five teaspoons of sugar for one teaspoon of tea leaves is typical), and water at the boiling point is then poured in the pot, the pot may then be taken to heat and further boiled to increase the flavor of the infusion.

After three to five minutes, a glass is served and poured back in the pot two to three times, in order to mix the tea. Tea is then tasted (sugar if needed may be added) until the infusion is fully developed.