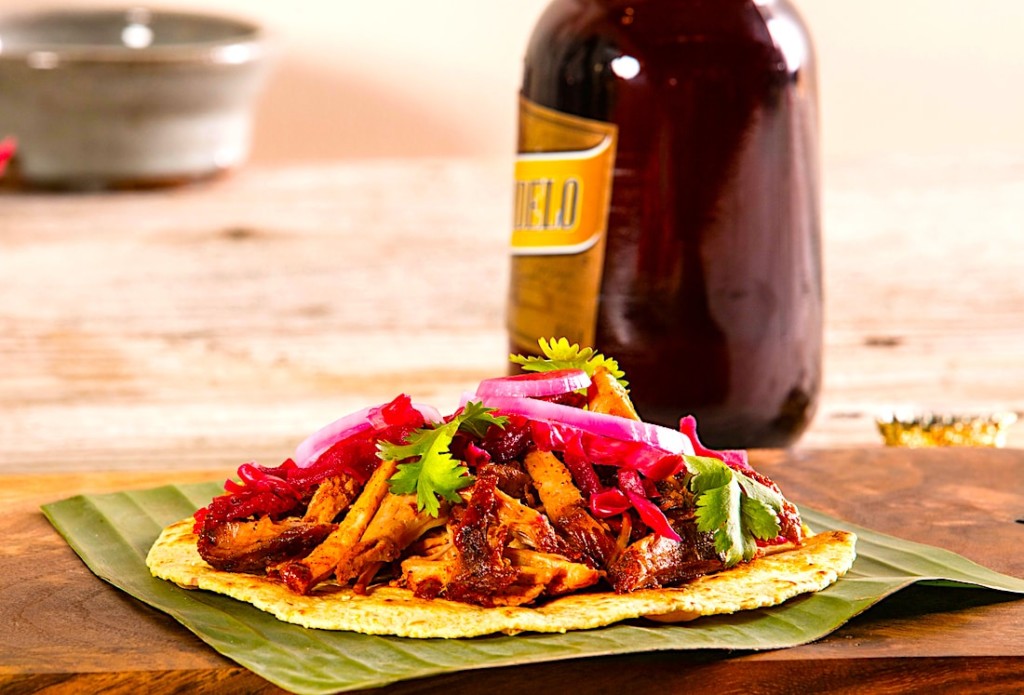 Citizens, we are now in the final throes of the week of the “Divine Swine” in honor of Chinese New Year – the year of the Earth Pig! As such, there is no more apropos recipe to include than this King of recipes from the Yucatán in Mexico, where a whole pig is – wait for it – cooked in an earthen pit! 🙂

I have previously posted a recipe for this, but one that was adapted to using only a pork shoulder and cooked in the oven – this is for its Big Daddy – the whole pig itself – as was originally made by the Mayans!

Cochinita pibil (also puerco pibil or cochinita con achiote) is a traditional Mexican slow-roasted pork dish. Preparation of traditional cochinita involves marinating the meat in strongly acidic citrus juice, seasoning it with annatto seed which imparts a vivid burnt orange color, and roasting the meat while it is wrapped in banana leaf.

The Yucatecan recipes always employ the juice of Seville or bitter oranges for marinating. In areas where bitter oranges are not common, juice of sweet oranges combined with lemons, limes, or vinegar are employed to approximate the effect of the bitter orange on the meat.

Another important ingredient in all pibil recipes is achiote (annatto), which gives the dish its characteristic color and adds to flavor. It is usually eaten with side dishes such as: corn tortillas, red pickled onion, refried black beans and habanero chilies. Traditionally, cochinita pibil was buried in a pit with a fire at the bottom to roast it.

The origin of the word pibil is unclear as to whether it comes from the Mayan noun for roasting or the verb ‘to roast’ as these are the same word pib.

Cochinita pibil finds its origin in the fusion between the Mayan culture that lived in that region and the European customs and ingredients introduced by the Spaniards in 1521. Some condiments, such as the achiote, have a Pre-hispanic origin, while the tradition of eating pork meat was a European tradition.

When you visit the buffets of Yucatán, you’ll recognize cochinita pibil thanks to the dark orange broth that bathes the meat and the banana leaves that cover it together with some red onion slices.

The puerco pibil is a recurring element of the movie Once Upon a Time in Mexico directed by Robert Rodriguez, where it is the favorite food of a CIA agent played by Johnny Depp, who orders this dish every time he enters a Mexican restaurant and urges every person he has lunch with to taste it. He will go as far as killing a cook because his puerco pibil is “too good”.

Rodriguez also includes a recipe for puerco pibil and demonstrates how to prepare it in the special features section of the DVD.

I am truly indebted to Chef Rick Bayless, whose TV cooking show set in the Yucatán first turned me on to this fantastic recipe. The cooking method and pit creation instructions are all his, but I use my own recado rojo (red seasoning paste) recipe, based on one I found at los-dos.com.

This recipe is a trip back to an ancient time, one where hard work was rewarded with a legendary meal truly fit for the Gods! As such, I wish you (and many friends, this recipe easily serves 30+) Godspeed and good eating! As always for the recipes in this week of whole pig, please read the master recipe on how to cook a whole hog here.

Do NOT follow this link or you will be banned from the site! Click here to see our Privacy Policies, Citizen!
48shares
wpDiscuz
0
0
Would love your thoughts, please comment.x
()
x
| Reply