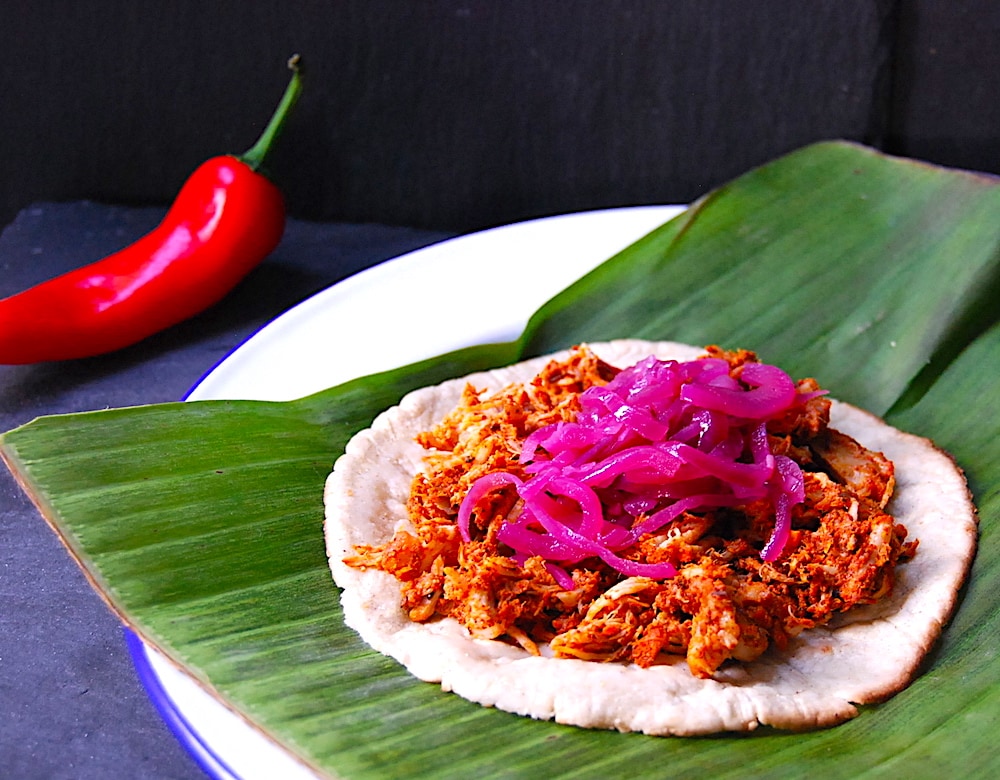 Citizens, your inestimable Wazir – the mighty TFD Himself! – has always had a soft spot for Yucatecan cuisine. My one and only love lived in theYucatán for several years and has a tremendous appreciation for the food of the region and has helped to educate me on its spicy glories!

Cochinita pibil (also puerco pibil or cochinita con achiote) is a traditional Mexican slow-roasted pork dish from the Yucatán Peninsula. Preparation of traditional cochinita involves marinating the meat in strongly acidic citrus juice, seasoning it with annatto seed which imparts a vivid burnt orange color, and roasting the meat while it is wrapped in a banana leaf.

The Yucatecan recipes always employ the juice of Seville or bitter oranges for marinating. In areas where bitter oranges are not common, juice of sweet oranges combined with lemons, limes, or vinegar are employed to approximate the effect of the bitter orange on the meat.

Another important ingredient in all pibil recipes is achiote (annatto), which gives the dish its characteristic color and adds to flavor. It is usually eaten with side dishes such as: corn tortillas, red pickled onion, refried black beans and habanero chilies.

Traditionally, cochinita pibil was buried in a pit with a fire at the bottom to roast it. The origin of the word pibil is unclear as to whether it comes from the Mayan noun for roasting or the verb ‘to roast’ as these are the same word pib.

The puerco pibil is a recurring element of the movie Once Upon a Time in Mexico directed by Robert Rodriguez, where it is the favorite food of a CIA agent played by Johnny Depp, who orders this dish every time he enters a Mexican restaurant and urges every person he has lunch with to taste it. He will go as far as killing a cook because his puerco pibil is “too good”.

Rodriguez also includes a recipe for puerco pibil and demonstrates how to prepare it in the special features section of the DVD.

It was from Rodriguez that I cribbed the idea of adding some tequila to the pork mixture and I have seriously adapted the great recipe from Serious Eats as my base. I also include recipes for the necessary pickled red onions and habanero salsa. Combine these all into a soft taco and you have heaven on a plate!

Citizens, I have every confidence you will LOVE this recipe! 🙂