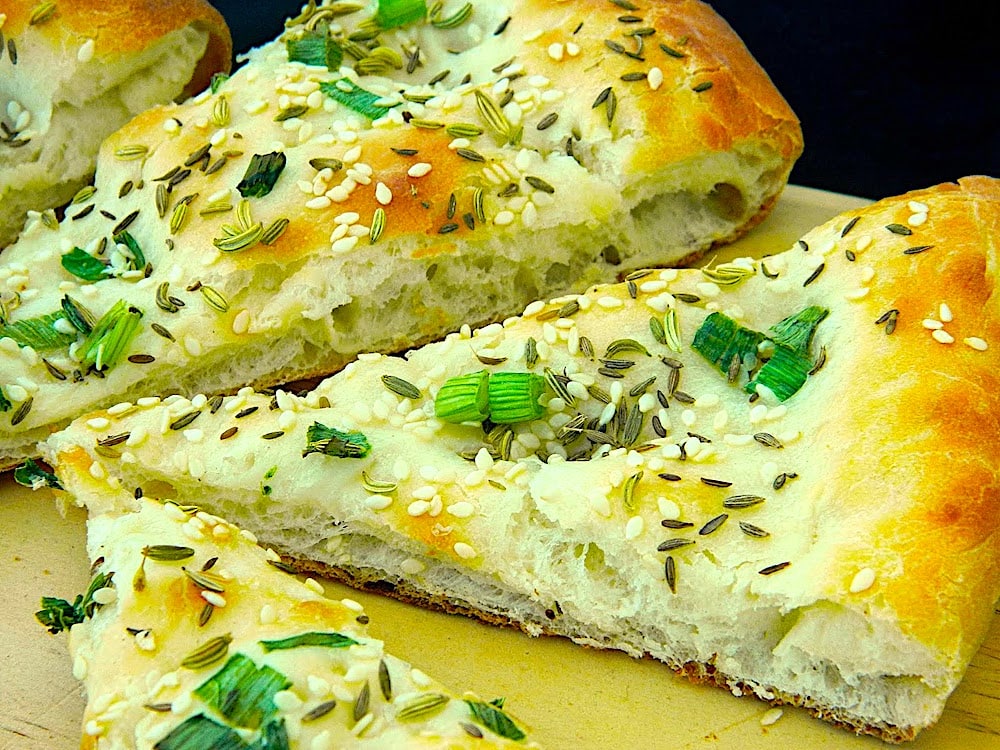 Citizens, it is no secret that the all-powerful ruler of TFD Nation has a serious predilection for central Asian breads of all forms! I have breads from Tajikstan and many other countries along the Silk Road here on the blog, and it is now time to add one from the terminus of the Silk Road – Xinjiang, a Muslim autonomous region of northwest China! 🙂

Due to the large Muslim population in western China, many Chinese restaurants cater to, or are run by, Muslims. Northern Chinese Islamic cuisine originated in China proper. It is heavily influenced by Beijing cuisine, with nearly all cooking methods identical, and differs only in material due to religious restrictions. As a result, northern Islamic cuisine is often included in home Beijing cuisine though seldom in east coast restaurants.

During the Yuan dynasty, halal methods of slaughtering animals and preparing food was banned and forbidden by the Mongol emperors, starting with Genghis Khan who banned Muslims and Jews from slaughtering their animals their own way and made them follow the Mongol method.

Among all the [subject] alien peoples only the Hui-hui say “we do not eat Mongol food”. [Cinggis Qa’an replied:] “By the aid of heaven we have pacified you; you are our slaves. Yet you do not eat our food or drink. How can this be right?” He thereupon made them eat. “If you slaughter sheep, you will be considered guilty of a crime.” He issued a regulation to that effect … [In 1279/1280 under Qubilai] all the Muslims say: “if someone else slaughters [the animal] we do not eat”. Because the poor people are upset by this, from now on, Musuluman [Muslim] Huihui and Zhuhu [Jewish] Huihui, no matter who kills [the animal] will eat [it] and must cease slaughtering sheep themselves, and cease the rite of circumcision.

However, due to the geographic proximity of the northern part of China to minority-dominated regions that were not subjected to such restrictions, beef could be easily purchased and transported to northern China. At the same time, ducks, geese, and shrimp are rare in comparison to southern China due to the arid climate of northern China.

A Chinese Islamic restaurant (Chinese: 清真菜館; pinyin: qīngzhēn càiguǎn) can be similar to a Mandarin restaurant with the exception that there is no pork on the menu and is primarily noodle/soup based.

In most major eastern cities in China, there are very limited Islamic/Halal restaurants, which are typically run by migrants from Western China (e.g., Uyghurs). They primarily offer inexpensive noodle soups only. These restaurants are typically decorated with Islamic motifs such as pictures of Islamic rugs and Arabic writing. Another difference is that lamb and mutton dishes are more commonly available than in other Chinese restaurants, due to the greater prevalence of these meats in the cuisine of western Chinese regions.

Other Muslim ethnic minorities like the Salar, Dongxiang, Bonan, and Tibetan Muslims have their own cuisines as well. Dongxiang people operate their own restaurants serving their cuisine.

Many cafeterias (canteens) at Chinese universities have separate sections or dining areas for Muslim students (Hui or western Chinese minorities), typically labeled “qingzhen.” Student ID cards sometimes indicate whether a student is Muslim and will allow access to these dining areas or will allow access on special occasions such as the Eid feast following Ramadan.

Most Chinese regard Hui halal food as cleaner than food made by non Muslims so their restaurants are popular in China. Hui who migrated to Northeast China (Manchuria) after the Chuang Guandong opened many new inns and restaurants to cater to travelers, which were regarded as clean.

The Hui who migrated to Taiwan operate Qingzhen restaurants and stalls serving Chinese Islamic cuisine in Taipei and other big cities.

Nang 馕 Нәң, is a type of round unleavened bread, topped with sesame. It is similar to South and Central Asia naan. My version is based very closely on an outstanding recipe I found at chelseyschinacookingchallenge.blogspot.com. I’ve modified her recipe to include a bit of sesame oil and added nigella seeds in place of fennel. I also specify Maldon sea salt flakes as they are the perfect size and thickness to complement the bread, IMHO.

I also call for a unique hardware item to make the bread holes – a bread stamp that is commonly used throughout central Asia. This version is from Uzbekistan and most closely matches the classic Uyghur bread pattern.

I have every confidence you will love this recipe, ! 😀