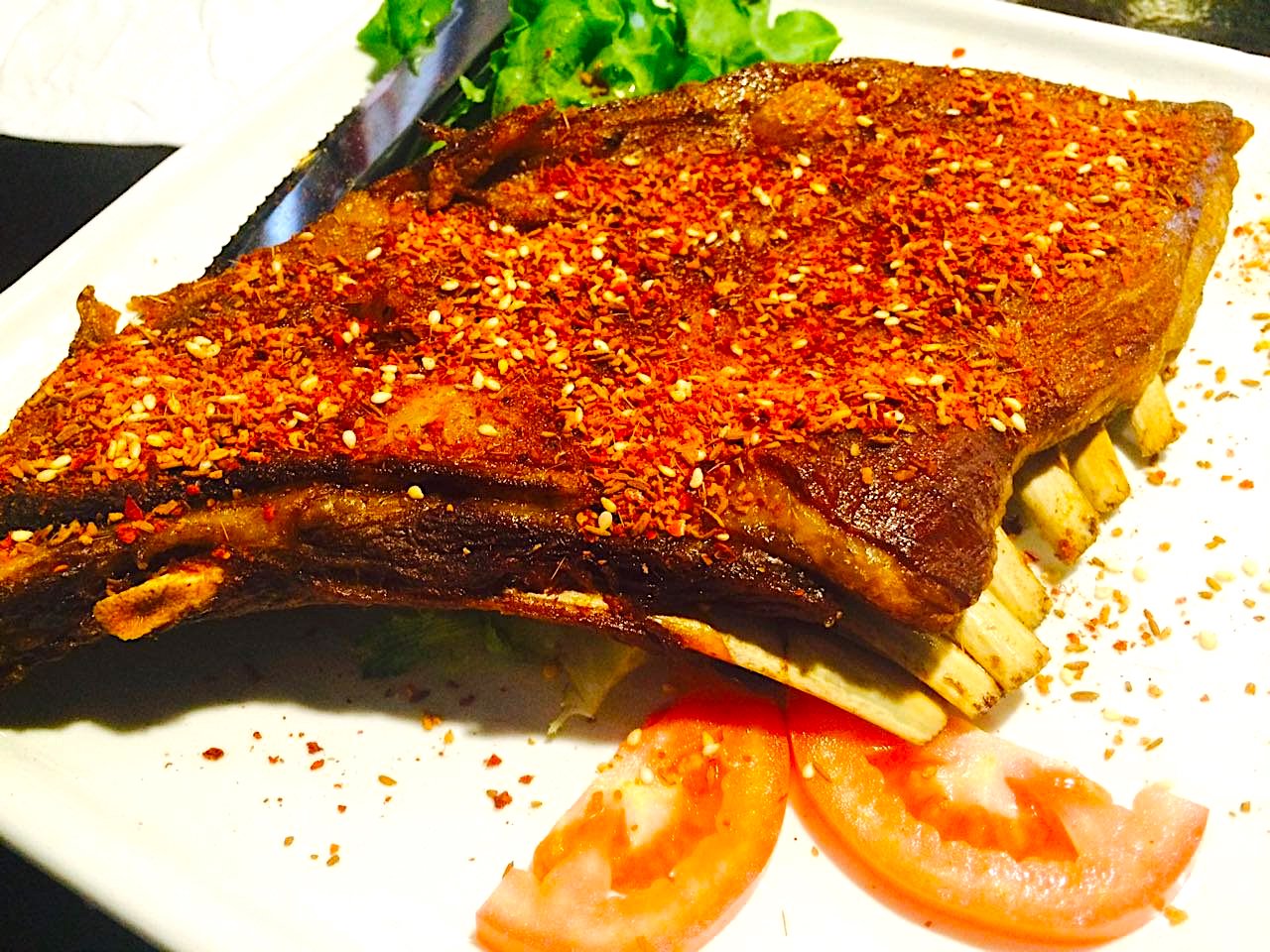 My Citizens – few things provide more of a frisson of anticipation within the palate of the Emperor of Empiricism – YOUR TFD – than the opportunity to try a new dish in an unexpectedly good venue! I have most recently discovered a small strip-mall gem of a restaurant in San Francisco that really fits the bill (of fare!). Fang Yuan Kitchen is one of many delightful restaurants of humble origin in the Bay Area serving insanely authentic cuisine – you just have to be willing to try some new dishes!

Today, I had the opportunity to sample the Chef’s version of dry-fried intestines (spicy, rich and delicious!) for the first time, while also enjoying a celestial dish I first discovered at this establishment: Xinjiang cumin lamb ribs! This dish will redefine your sensibilities of what makes for a good rib-eating experience – pork and beef ribs are great, but lamb ribs (properly handled) are just as good, if not better when coated with a Silk Road spice crust!

There is a proud and distinguished history of cooking lamb in the Xinjiang Autonomous Region of China, dating back thousands of years! Since this is a Muslim area of China, pork is obviously not an option for good eating and the area is also not well-suited for cattle. However, the unending grassy plains of windswept Xinjiang are ideal for sheep-raising, and the Uyghurs (the indigenous population) are well-renowned masters of lamb and mutton cooking alike!

Roasted whole lamb ( Uyghur : تونۇر كاۋىپى tonur kawipi ) is truly the most revered dish of the region, but is only rarely enjoyed due to the expense – these lamb ribs, however, are commonly-enjoyed street food and they are both spicy and delicious!

According to archaeological research, sheep DNA was discovered in some of the burned bones found at preserved campsites of the ‘Ordos people’, who were the first documented inhabitants of the region. The ‘Yuan History’ penned by the Chinese records that Mongols in the 12th century “dug the ground for the purposes of scorching meat”. In the 13th century, during the Yuan Dynasty in China, the cooking methods and workmanship had become more refined and exquisite.

During the reigns of Emperor Kangxi and Qianlong, the roasted whole lamb produced by the “Royal Palace of Luo” in Beijing was famous, and its chef – named Garudi – was also very renowned throughout the Empire. During the period from the end of the Qing Dynasty to the founding of the People’s Republic of China, there were still roasted whole lambs served in palaces everywhere in China.

Ethnic groups in Xinjiang generally have different cooking and eating methods. Han people in Xinjiang use chopsticks, while Kazakhs eat with their hands. Ceremonial foods for certain groups include horse milk (kymyz) for the Kyrgyz and sheep entrails for the Sibe. The dishes of the Dongxiangs are prominent in Xinjiang-style restaurants. Signature Dongxiang dishes include noodles boiled in a thick mutton soup and steamed twisted rolls.

A Uyghur-style breakfast is tea with home-baked bread, smetana, olives, honey, raisins and almonds. Uyghurs like to treat guests with tea, nan and fruit before the main dishes are ready. Most Uyghur foods are eaten with chopsticks, a custom that was adopted from Han Chinese culture in the 19th century.

Many Uyghur dishes are also found among other ethnic groups in Central Asia, and their food also shows Han Chinese influence. In particular, the Han introduced many vegetables to the Xinjiang diet, as are reflected in Uyghur loanwords for vegetables like xuangga (黄瓜, huángguā, “cucumber”) and chäyza (茄子, qiézi, “eggplant”).

Now – as to this particular dish, it is important to remember that to the Uyghurs, fat is flavor! You should keep the fat on the ribs, as the proper cut of ribs and their preparation is key to the final success of the meal. Now – to find the best possible starting place for my recipe, I sought out the hidden masters of Chinese cuisine.

As with so many people on the popular social media platform Reddit, there is a contributor in the Chinese recipes area who is a true Sifu of his craft – and surprisingly, he is an American living in China! His handle is u/mthmchris and if you’re on Reddit, please go follow him immediately – he is the real deal!

Here are some important tips from him on how to successfully make this dish:

For the unaware, these ribs ostensibly do what they say on the tin – lamb, roasted, covered in a cumin-heavy Northwest-style rub.

But what really makes the dish, to me at least, is their texture. “Fall off the bone” is a cliché that I tend to try to avoid, but… yeah. These are fall off the bone. But what makes them so interesting to me is how they get there – coming from the West, we’d probably assume there’s some sort of slow roasting situation going on. Nah. At their core, these ribs are poached or braised… then blasted in an oven at a high temp. Basically, the same idea as a reverse sear.

It’s a cool approach, and makes for some lamb ribs that’re easy to love.

Ok, so we’ll get into the whole soaking process later, but the idea is to remove some of that slight ‘off’ odor that lamb can sometimes be guilty of. The classic way Chinese cooking handles that is with some Liaojiu/Shaoxing wine, but a solid chunk of the Chinese Northwest is Muslim – so wine’s obviously a no-go. So let’s just keep this Halal and use Ginger-Sichuan Peppercorn water… i.e. water steeped with those ingredients. Serves much the same function as Shaoxing wine… balances those odors.

This secret imparted by the Master is indeed one of the classic Chinese epicurean steps used when preparing lamb of any form. By lightly poaching the meat with ginger and aromatics it helps remove the lamb odor – which to the Chinese nose, is a barbaric smell that must be removed. My version of the Xinjiang spice mix incorporates the classic ingredients, but in my preferred amounts and with one or two TFD touches that elevate it even further.

You can purchase top-quality Sichuan peppercorns from here, Icelandic smoked salt (which I use to help replicate the smoky grilled flavor you would find in Xinjiang, as it is cooked in a wood-fired oven there) from here, Chinese yellow rock sugar from here and an excellent-quality Ceylon Cinnamon from here. Citizens, be advised this is a 2-day process, but 90% of the work is on day 1 – day 2 is literally just cooking for 15 minutes and you’re done!

I have high hopes you will try this deliciously-authentic recipe during your pandemic lockdown – and if you want to make a full-on Uyghur feast, try serving this as a main course with Uyghur lamb and pumpkin dumplings as an appetizer!