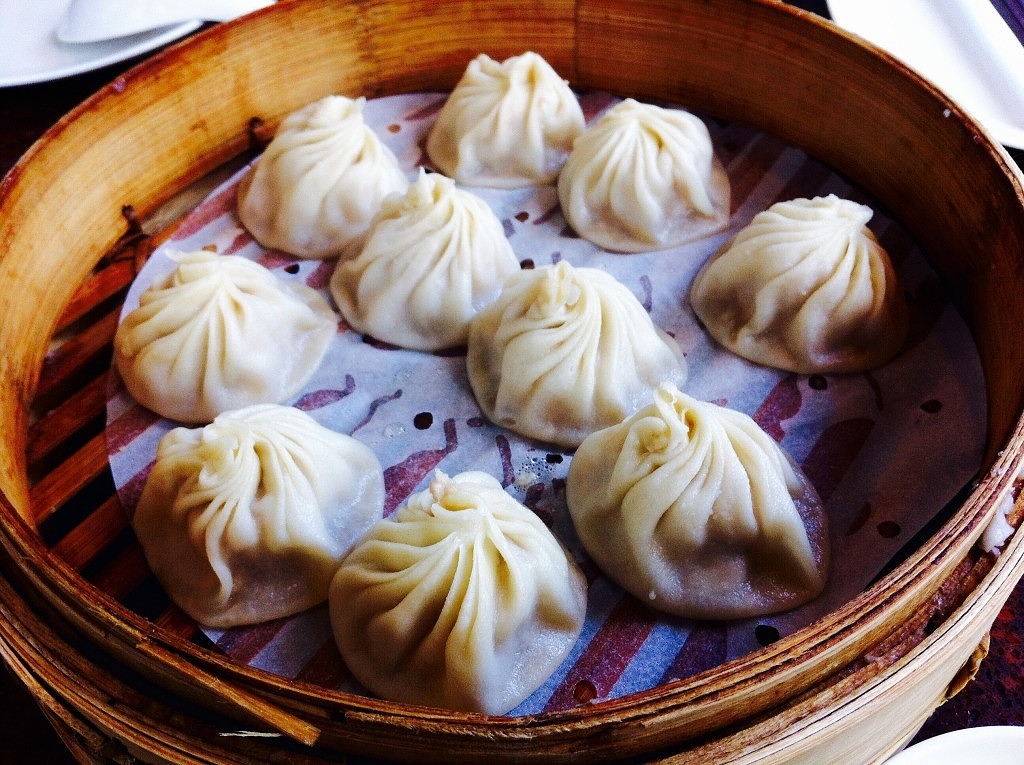 Citizens – behold one of my most authentic, complex and delicious recipes ever to grace your table! 😀

Xiaolongbao are a type of steamed dumpling filled with both meat *and* soup from the Jiangnan region of China, especially associated with Shanghai and Wuxi. It is traditionally prepared in xiaolong, small bamboo steaming baskets, which give them their name.

The Xiaolongbao recipe is very distinct and people often wonder how the soup gets into the dumpling. An intensely flavorful stock is first prepared from meat, chicken or pork (preferably all of them). The flavored stock is then heavily reduced and gelled overnight with gelatin or agar. The gelled soup stock or aspic is then cut up into tiny pieces the next day and mixed with the filling.

A traditional Xiaolongbao recipe calls for pure pork fillings, but higher-end versions also mix in crab or shrimp as well. The gelled aspic and meat filling is then added into the wrapper, pleated close with (ideally) 18 pleats and then steamed.

The steaming heat makes the aspic melt causing a small hot stream of soup to come gushing out when the dumpling is bitten into.

Xiaolongbao are served in the same steamer they were cooked in. A mat of pine needles or vegetables leaves is placed at the bottom of the steamer. The Xiaolongbao is served with Chinkiang black vinegar with ginger slivers. The Xiaolongbao has to be picked up with chopsticks along the middle to prevent the skin from breaking and dipped into the vinegar/ginger mixture, after which it is placed on a spoon.

A small cut is bitten into the wrapper and the soup should be sucked out. The Xiaolongbao can be safely eaten whole after that. Eating the entire Xiaolongbao without doing this will cause hot soup to burst forth, burning the tongue and mouth. Beware, (I didn’t know what a Xiaolongbao was and foolishly put the entire dumpling into my mouth. Live and learn!).

Xiaolongbao were most likely first created in Nanxiang, outside Shanghai, around 1875. Although they can still be found there, it was in Taiwan that they began their global domination, thanks to a cooking-oil-store-turned-restaurant called Din Tai Fung.

The owner of the restaurant happened to hire a chef who knew how to make xiaolongbao, which he churned out without recipes or measurements, until his gambling problems got in the way. Thankfully, before his epic meltdown, he taught his apprentices how to make them. Today, Din Tai Fung has restaurants all over the world and their xiaolongbao are considered definitive.

That said, I think mine are better. 😉

Citizens, I recognize this is an involved and difficult recipe. For my sake and yours, try it just once to gain a true appreciation for how these delectable morsels SHOULD be prepared!