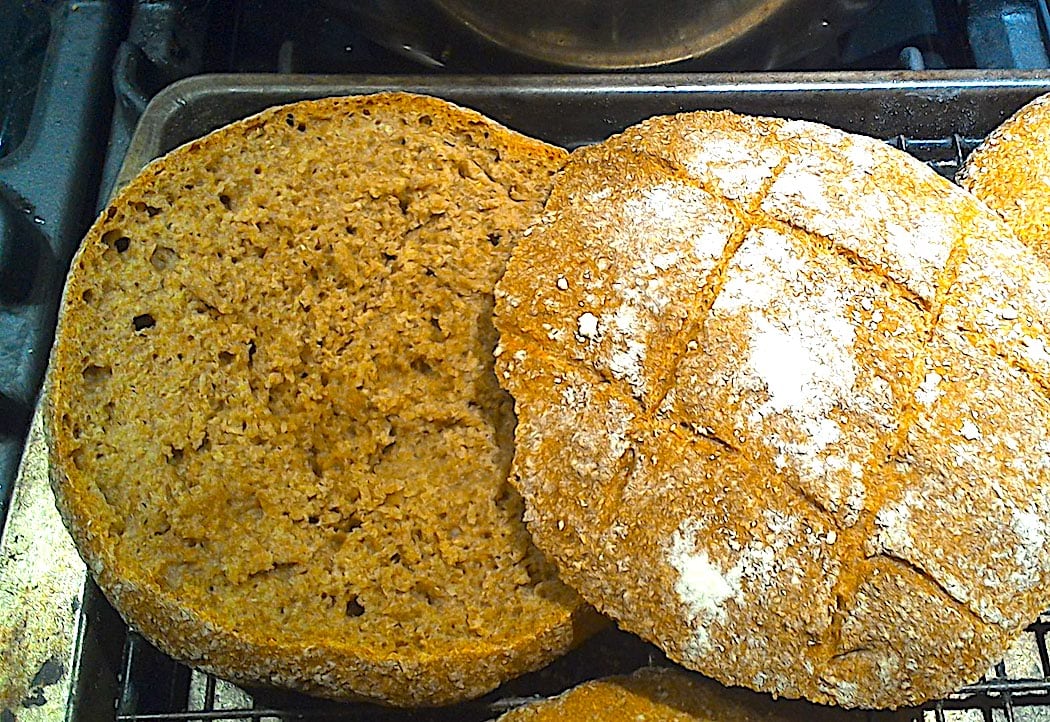 Citizens, the journey throughout medieval times continues as I, the Virgil to your Dante, unerringly guide you as we make our way through Europe. Today, not only will I teach you a recipe for a hearty and delicious bread recipe from Poland’s Middle Ages, you’ll save significantly on time washing up from your meal afterwards as this bread is more than just a side – it is the actual PLATE from which you’ll be partaking your meal!

Sound odd? It’s not at all, this was the modus operandi for everyone’s meals during the Dark Ages, from the King down to the humblest Polish peasant. Read on for details about Wroclaw (a city in Western Poland, pronounced Vroetswav) Medieval Trencher Bread!

A trencher (from Old French tranchier; “to cut”) is a type of tableware, commonly used in medieval cuisine. A trencher was originally a flat round of bread used as a plate, upon which the food could be placed to eat. At the end of the meal, the trencher could be eaten with sauce, but was more frequently given as alms to the poor.

Later the trencher evolved into a small plate of metal or wood, typically circular and completely flat, without the lip or raised edge of a plate. Trenchers of this type are still used, typically for serving food that does not involve liquid; the cheeseboard is perhaps the most common type in the West. An individual salt dish or squat open salt cellar placed near a trencher was called a “trencher salt”.

A “trencherman” is a person devoted to eating and drinking, often to excess; one with a hearty appetite, a gourmand. A secondary use, generally archaic, is one who frequents another’s table, in essence a pilferer of another’s food.

A “trencher-fed pack” is a pack of foxhounds or harriers in which the hounds are kept individually by hunt members and only assembled as a pack to hunt. Usually, a pack of hounds are maintained together as a pack in kennels.

“Turn the Trencher” was a traditional children’s party game in which an adult spun a platter on its edge in the middle of a seated ring of children. The child whose name was called had to stand and run to catch the platter before it fell. Failure entailed a forfeit or minor ordeal. The game was current as late as the mid twentieth century.

In Virgil’s Aeneid, trenchers are the object of a prophecy. In bk.3, Aeneas recounts to Dido how after a battle between the Trojans and the Harpies, Calaeno, chief of the Furies, prophesied to him (claiming to have the knowledge from Apollo) that he would finally arrive in Italy, but:

Never shall you build your promised city
Until the injury you did us by this slaughter
Has brought you to a hunger so cruel
That you gnaw your very tables.

The prophecy is fulfilled in bk.7, when the Trojans eat the trenchers after a frugal feast. Aeneas’ son Ascanius jokes that they are so hungry they would have eaten the tables, at which point Aeneas realizes that the prophecy has been fulfilled. However, he reattributes the prophecy to his deceased father, Anchises:

I now can tell you, my father Anchises
Revealed these secrets to me for he said:
“When you have sailed, son, to an unknown shore
And, short of food, are driven to eat your tables,
Then, weary though you are, hope you are home

The Middle Ages, Everyday Life in Medieval Europe by Jeffrey L. Singman (Sterling publishers) offers the following observation: “The place setting also included a trencher, a round slice of bread from the bottom or the top of an old loaf, having a hard crust and serving as a plate. After the meal, the sauce-soaked trenchers were probably distributed to servants or the poor. Food was served on platters, commonly one platter to two diners, from which they transferred it to their trenchers.”

Shakespeare used the term in at least eleven of his plays. The term also appears commonly throughout George R.R. Martin’s A Song of Ice and Fire series, such as this excerpt from A Dance with Dragons: “The beer was brown, the bread black, the stew a creamy white. She served it in a trencher hollowed out of a stale loaf.”

As noted in this excerpted article from medievalists.net, the go-to source for all things related to the time:

Kings, knights, monks, peasants – everyone in the Middle Ages ate bread. It was also the food that caused bitter religious disputes and could make you go insane.

The history of bread dates back as far as 22 500 years ago – it was the staple of life for the ancient Mesopotamians and Egyptians, and was eaten throughout the Roman Empire.

It was made by grinding cereal grains, such as wheat, millet or barley, into flour, then kneading it with a liquid, perhaps adding yeast to make the dough rise and lighten, and finally baking. Bread comes in all shapes and sizes, but in his book Bread: A Global History, William Rubel notes that Europe has had a “loaf-bread culture” for the last 2,000 years, while flat bread remained popular in the Middle East and Africa.

By the beginning of the Middle Ages the preference was to eat white bread made from wheat – medieval physicians also recommended it as being the healthiest – but poorer peoples would bake darker breads with oats or rye. If one needed too, people could also add rice, peas, lentils, chestnuts, acorns or other foods into the mixture. In medieval France, most people would eat a type of bread known as meslin, which was made from a mixture of wheat and rye.

Like today, breads made in the Middle Ages came in all shapes and sizes. For example, in the Polish city of Wroclaw the people could buy and eat breads such as common white bread, common rye bread, black rye bread, wheat rolls, bagels, crescent rolls and flat cakes.

Besides using bread just for food, medieval people often used it as their plates: known as trenchers, these were breads that were cut into thick flat slices. Then others foods like meats or thick sauces would be served on top of them. Once the meal was finished, the bread could then be eaten, or, if you were wealthy or generous enough, was given to the poor or to animals.

Throughout the medieval world there were regulations about how to make and sell bread. Because this food was so central the people’s lives, authorities needed to make sure that even the poor could afford to buy it. In some places, the government would make sure that the price of grain did not rise too much (although this might lead grain sellers to ship their merchandise elsewhere), while in England the Assize of Bread was created in the 13th century.

These laws set up price controls for bakers, which would allow someone to buy at least some quantity of bread for a penny. Every year at least the size of this bread would be set according to the price of wheat and other grains – if the grain supply was expensive, your penny would only get you a small amount of bread; if grain was plentiful, than the size of the loaf would increase.

This system would last in England for over 500 years, although bakers occasionally tried to cheat by selling bread that did not meet regulations. In fourteenth-century London, for example, bakers were caught selling bread that had been mixed with dirt or chalk or even had an iron-bar inserted into it to make it weigh more.

In Poland, the use of trenchers was popular in the Middle Ages. The Polish city of Wroclaw kept bread laws that specified how this bread would be made. In her book Food and Drink in Medieval Poland, Maria Dembinska has used their records to recreate the recipe for this bread.

Citizens, my version of the recipe is Dembinska’s with one tiny change – I’ve added in ground caraway, a common spice in Polish cuisine that would have been used in the ‘noble’ version of this bread by the King and his court. It is healthful, dense (so the juices don’t seep through onto the table) and toothsome – well worthy of your best baking efforts! I would serve this with some Polish Bigos stew, although plain old beef stew is also delicious with it! You can buy excellent spelt flour from here.