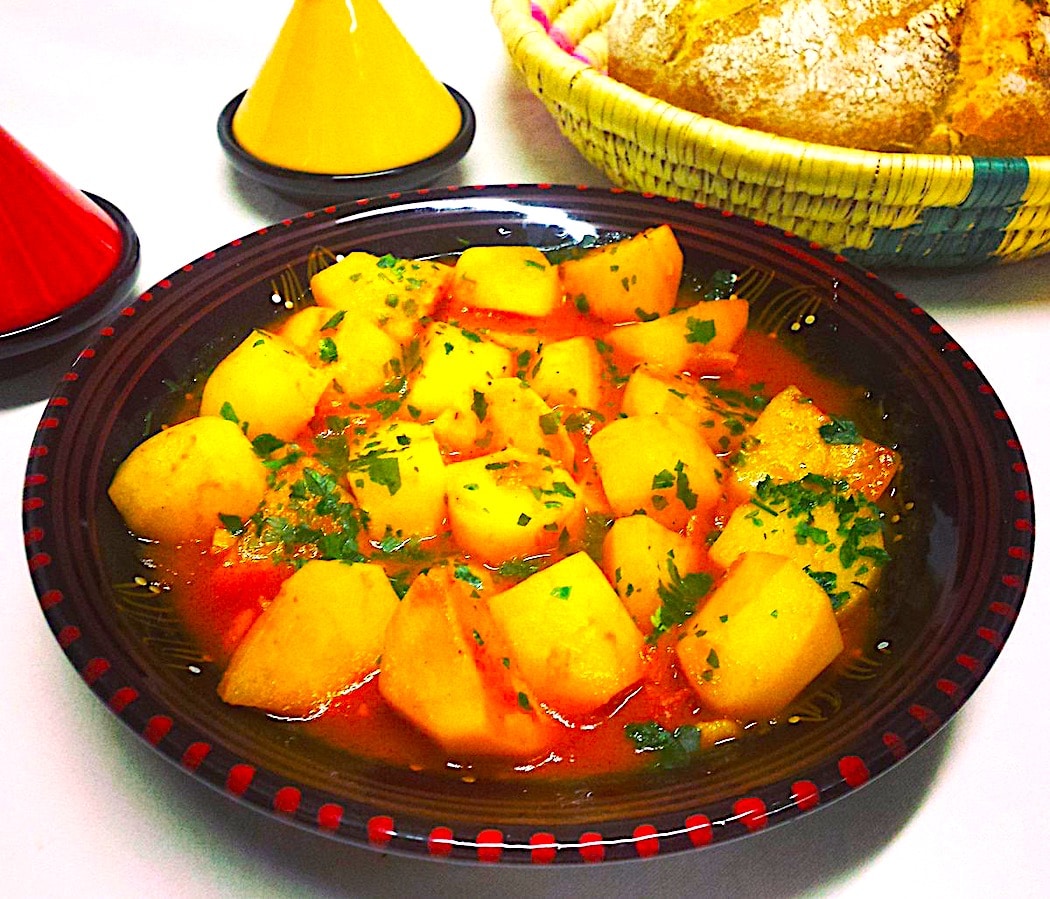 My Citizens! Few things are greater truisms than the observation that the Almighty Aristocrat of Absolutism – YOUR TFD! – is agog when it comes to enjoying anything with spicy heat! This Algerian dish certainly fits the bill, !

The cuisine of Algeria is influenced by Algeria’s interactions and exchanges with other cultures and nations over the centuries. It is characterized by a wealth derived from both land and sea products. Conquests or demographic movement towards the Algerian territory were two of the main factors of exchanges between the different peoples and cultures (Berbers, Arabs, Turks, Andalusians, French and Spaniards). This cuisine is a Mediterranean and North African cuisine with Berber roots.

Algerian cuisine offers a variety of dishes depending on the region and the season, but vegetables and cereals remain at its core. Most of the Algerian dishes are centered around bread, meats (lamb, beef or poultry), olive oil, vegetables and fresh herbs. Vegetables are often used for salads, soups, tajines, couscous and sauce-based dishes. Of all the Algerian traditional dishes available, the most famous one is couscous, recognized as a national dish.

Pork consumption is forbidden to Muslims in Algeria, in accordance with Sharia, the Islamic law.

Algeria, like other Maghreb countries, produces a large range of Mediterranean fruits and vegetables and even some tropical ones. Lamb is commonly consumed and Mediterranean seafood and fish are also eaten and produced by the small inshore fishing industry.

Hot spices used in Algerian cuisine include dried red chili of different kinds and Algerians also consume a high amount of meat, as it is found in almost every dish. Mutton is the most eaten meat in the country, Poultry and beef are also used. Other uncommon types of meat such as game, birds and venison are considered a delicacy, wild boar is also hunted and eaten, but pork will not be available in stores, as it can only be bought from hunters directly. In the south, dromedary meat is also eaten.

Vegetables are often used in stews tagine or (jwaz/djwizza) and soups (chorba or harira or jari) or simply fried or boiled. In the context of rituals, only Algerian bread (as opposed to French baguettes) is thought to be suitable.

Breads offered to guests should be homemade, as it signifies the essence, intimacy, and qualities of the family. In daily practices, it is also a sign of wealth and affluence if one has extra bread at the table, and making bread at home can be considered a sign of familial economic independence.

As noted on the excellent blog icooktheworld.wordpress.com:

Rose buds, cloves, Ceylon cinnamon, wild fennel, star anise are some of the flavorings and spices used in Algerian cooking. Algeria’s location made it an important country along the Mediterranean and Saharan trade routes.

Its ancient history tells of a healthy commerce which brought much of the trading world’s goods across its borders. Exotic foods, rich textiles, perfumes, jewels, glass, metals, money, art, literature, religion all came into Algeria from the sea merchants of the Mediterranean.

Danger also came, as country after country invaded Algeria, claiming its people and its riches, as their own. France finally let loose of Algeria in 1962, after 8 years of pitched battle. They left behind French bread, tomato paste, other culinary goodies and sidewalk cafes. Au Revoir. The cooking of Algeria is sumptuous and cooking methods can be involved and recipes kept secret.

I have made this particular version of the spicy potato stew that is beloved throughout the country to be a Western Algerian variant – which since it borders Morocco uses the unmatched spice blend known as ras-el-hanout (‘top of the shelf’ in Arabic).

It adds a fantastic complexity to the normally two-note seasoning paste known as dersa (spicy and garlic-laden, to be specific). Both of these flavors are on point for me, I just like a bit of complexity, so I have added ras-el-hanout and a few other Algerian-specific spices to my version of dersa. You can buy a decent ras-el-hanout here, but I strongly prefer my unmatched version, found here. These are the dried rosebuds I like for this recipe and this store has great Ancho chile powder.

Dersa is very simple to prepare, you do however need a mortar and pestle to make it traditionally (in Algerian the word for mortar is Mahraze). Once the dersa is ready, this is a supremely easy dish to prepare – I promise it will be a huge hit at your next meal, Citizens! 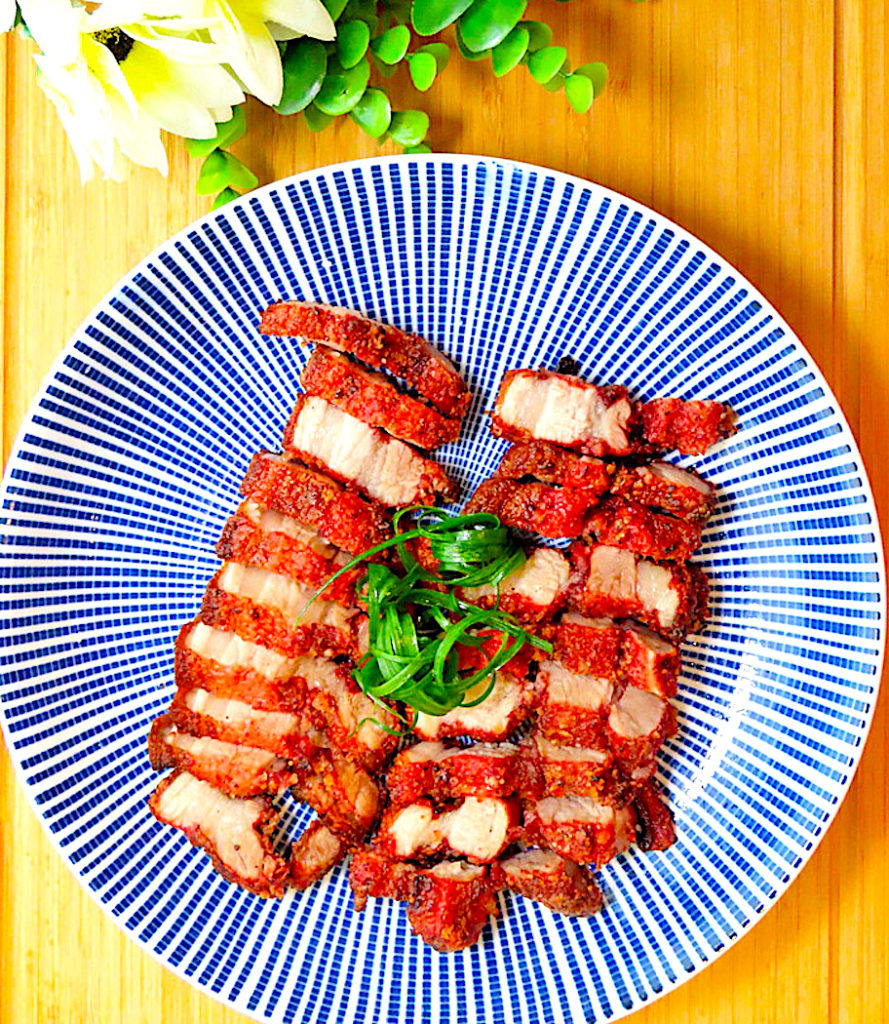 () Citizens, today is indeed a red-letter day in the history of TFD Nation, as I am going to be sharing one of my favorite street foods with you from the fantastic country of Taiwan, one of Asia’s true gastronomic melting pots and home to some truly delectable dining indeed! Why do I say a…