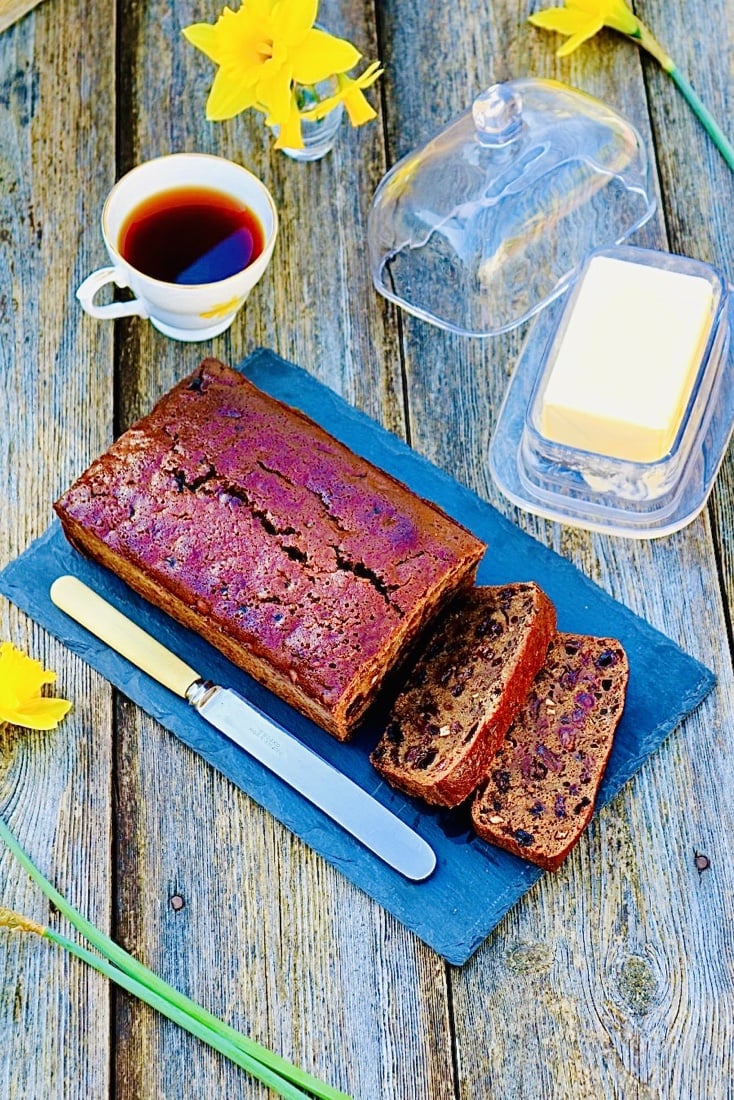 Citizens! The Ineluctable One – YOUR TFD! – has a passionate and pure love for the hills and dales of Wales, and despite everything the English may say, it DOES indeed have mountains. 😉 I have traveled the length and breadth of Wales, from Llandudno in the north to Cardiff in the south and everywhere in between.

In point of fact, one of my all-time favorite TV shows – The Prisoner – was secretly filmed in Wales and I visited the very eccentric estate at Portmeirion that was the primary set!

One of my favorite Welsh recipes is for the delicious tea cake known as ‘Bara Braith’ in Welsh, and today I am honored to share my version of this delicious dessert with all of TFD Nation!

Bara brith is a yeast bread (in Northern Wales) enriched with dried fruits or in South Wales it is made with self-raising flour (no yeast). It is traditionally flavored with tea, dried fruits and mixed spices, and is served sliced and buttered at tea time. Bara brith derived its name from the Welsh language, ‘bara’ meaning bread and ‘brith’ translating as speckled. Bara brith is traditionally served at tea time, alongside tea. It is normally served in slices with butter spread on one side.

A decrease in its popularity led to the supermarket chain Morrisons to remove it from their shelves in 2006, and a year later a survey showed that 36% of teenagers in Wales had never tried it. When responses across the UK were viewed, some 85% of teenagers had never tried the traditional Welsh bread. It has been subsequently championed by celebrity chefs such as Bryn Williams. Several variations on bara brith have been made, including changing it into a chocolate and into ice cream.

It is claimed to have been invented by a Welsh chef who added dried fruit and spices to a bread dough, creating the first version of the traditional Welsh tea loaf. It has subsequently been used as a colloquialism – to “over spice the bara brith” means to do something to excess.

Celebrity chef Phil Vickery cooked bara brith in Brynsiencyn, Anglesey, in 2011 for a segment on the ITV television series This Morning. He used a traditional recipe which had been handed down to local chef Nerys Roberts through her family. Her bakery had previously supplied British supermarket chain Safeway with bara brith, before it was bought out by Morrisons.

My version of this delicious bread conforms to tradition, soaking the dried fruits in black tea (in my case, I prefer to use the florally-scented Earl Grey or the plummy Darjeeling, second flush for this recipe). I do prefer the Southern Welsh version to the yeasted Northern preference, and I also add some orange marmalade to both the bread dough and to glaze the top as well – I prefer this classic version.

I also give a respectful nod to the ancient Welsh tradition of mead making, mead being a fermented alcoholic beverage based on honey. Metheglin is an ancient version of mead flavored with herbs and spices and this metheglin is PERFECT with this recipe! The history of mead in Wales is ancient and profound, as noted in this excerpt from traditionalmead.uk:

WILL adore the Ruler, chief of every place,
Him, that supports the heaven: Lord of everything.
Him, that made the water for every one good,
Him, that made every gift, and prospers it.
May Maelgwn of Mona be affected with mead, and affect us,
From the foaming mead-horns, with the choicest pure liquor,
Which the bees collect, and do not enjoy.
Mead distilled sparkling, its praise is everywhere.
The multitude of creatures which the earth nourishes,
God made for man to enrich him.
Some fierce, some mute, he enjoys them.
Some wild, some tame, the Lord makes them.
Their coverings become clothing.
For food, for drink, till doom they will continue.
I will implore the Ruler, sovereign of the country of peace,
To liberate Elphin from banishment.
The man who gave me wine and ale and mead.
And the great princely steeds, beautiful their appearance,
May he yet give me bounty to the end.
By the will of God, he will give in honour,
Five five-hundred festivals in the way of peace.
Elphinian knight of mead, late be thy time of rest.

Men went to Catraeth at morn
Their high spirits lessened their life-span
They drank mead, gold and sweet, ensnaring;
For a year the minstrels were merry.
Red their swords, let the blades remain
Uncleansed, white shields and four-sided spearheads,
Before Mynyddog Mwynfawr’s men.

This poem tells how the ruler of the Gododdin, Mynyddog Mwynfawr, gathered warriors from several Brythonic kingdoms and for a year’s feasting and drinking mead in his halls at Din Eidyn (now Edinburgh today) shortly before attacking Catraeth (believed to be Catterick, North Yorkshire today).

There are also mentions of mead in Beowulf where Danish warriors drank mead and Mead featured as a heroic drink in both German and Celtic poetry.

For the remainder of the recipe, you’ll need a special kind of dark brown sugar that is popular in Great Britain in order to make this properly, buy it here. You’ll also need the classic British ‘mixed spice’, which can be easily purchased here, and for the dried fruits and peels, you can purchase currants here, candied orange peel of the highest quality here and the same brand of lemon peel here.

Citizens, bara brith is a delicious addition to your baking repertoire and I hope that you find it worthy enough to make at your earliest convenience – your family and friends will assuredly thank you and you’ll be one step closer to the magical land of Wales! Try it as a delicious dessert after a meal of Welsh Glamorgan sausages!