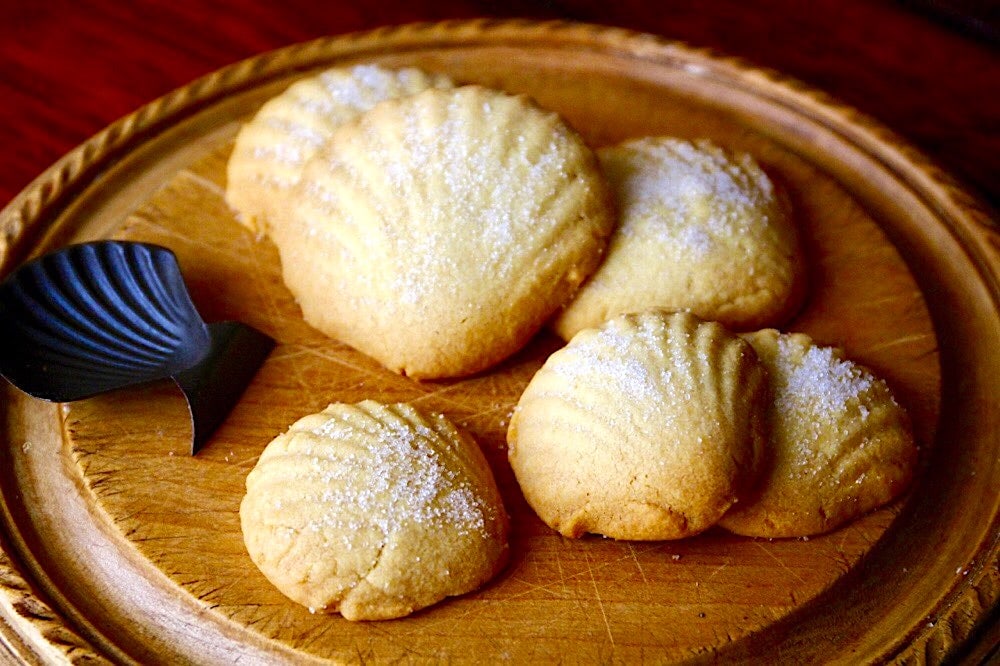 My Citizen, few things please your antiquarian absolutist – the hoary TFD Himself! – more than when His combined passions of food and history align with the stars of destiny as perfectly as today! For on this evening I will share with you an 800-year old recipe – the oldest biscuit in Britain in fact! 😀

As noted in an article in The Daily Post:

A SWEET-TOOTHED couple have revived the oldest biscuit in Britain – a treat which dates back to the 13th century.

James Shepherd and his wife Natasha have set up a company to make the scallop-shaped Aberffraw Biscuit, first baked in the Anglesey village of the same name 800 years ago.

One story has it that a Welsh king was holding court in Aberffraw and his wife was on the beach, spotted a scallop shell, and asked for a cake to be baked in the same shape.

A more plausible theory for the biscuit’s origins was the famous pilgrimage to Santiago de Compostela and the church of St James in Galicia, Spain, which began in the eighth century – with pilgrims wearing badges on their hat in the shape of a scallop shell.

It’s for this reason that Aberffraw biscuits are sometimes also called James cakes.

Under the patronage of King Gruffudd ap Cynan (1075-1137) or his son and successor Owain Gwynedd (1137-70), a stone church was built at Aberffraw with Romanesque features similar to 12th century churches on the pilgrimage route to Santiago de Compostela. This building is the final link to the scallop shell of St James pilgrims and the small Welsh village of Aberffraw.

The biscuit also appeared in the famous Cassell’s Dictionary of Cookery in 1892.

The classic Aberffraw recipe includes wholemeal flour to add a grainy quality, giving the biscuits a sandy texture evoking the beaches where the scallop shells were first discovered all those centuries ago. My version of this ancient shortbread actually includes a tweak to bring it firmly back to its origins in ancient Wales!

In the Middle Ages, granulated sugar was an expensive rarity. It is a virtual certainty that the original biscuits were sweetened with honey or perhaps even Mead – the fermented honey drink beloved by the ancient Britons and especially sacred to the Druids! Their specific version of mead was called ‘metheglin’ – specifically, it was mead infused with herbs and spices believed to be important to good health.

You may not be aware that the etymology is still relevant today: the word Metheglin is actually where the word medicine comes from! The name is derived from the Welsh word (Meddygllyn), (Meddyg) meant healing and (llyn) meant liquor. In Eastern Europe, Metheglyns are still heavily infused with herbs and drunk as a health tonic.

So, I think my version of these biscuits is perhaps as authentic as you will ever find today! Should you be unable or unwilling to use spiced mead in these, you can also just use Vanilla and Almond extracts instead.

I took the base recipe from ameliorator.blogspot.com and modified it to my taste, including the use of cultured butter, added back wholemeal flour as the original recipe called for, use regular sugar instead of icing sugar to dust the shortbread and of course – the spiced mead! Lastly, instead of the classic scallop shells to cook the shortbread in, I recommend instead using a French madeleine tray, which are in fact scallop-shaped!

Citizens, Aberffraw Biscuits – Pilgrim Shortbread – will take you back to an earlier era – I hope you enjoy it as much as I do!