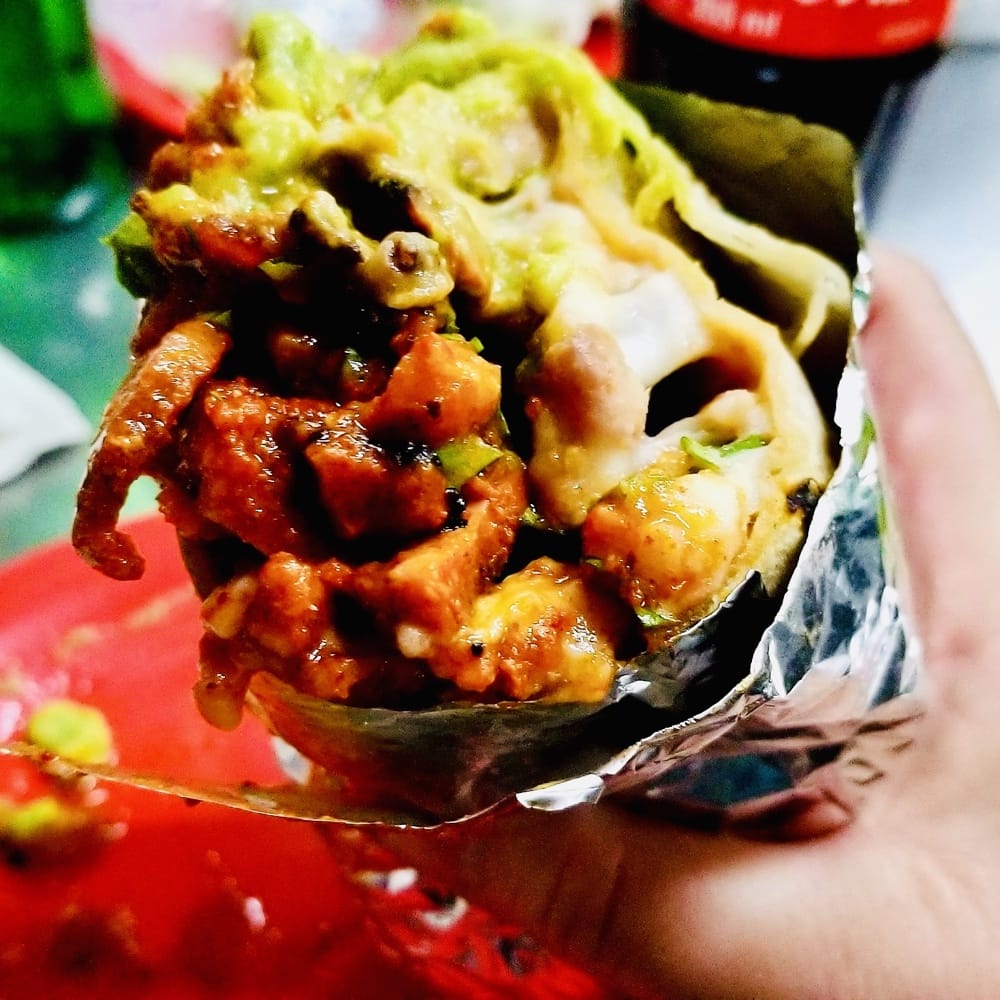 Citizens, as we close out the year, allow the Glory who alone is TFD to share with you one of his fave street meals: burritos! 🙂

A burrito is a dish in Mexican and Tex-Mex cuisine that consists of a flour tortilla with various other ingredients.

It is wrapped into a closed-ended cylinder that can be picked up, in contrast to a taco, where the tortilla is simply folded around the fillings. The tortilla is sometimes lightly grilled or steamed to soften it, make it more pliable, and allow it to adhere to itself when wrapped. A wet burrito, however, is covered in sauce and is therefore generally eaten with silverware.

In Mexico, meat and refried beans are frequently the only fillings. In the United States, however, burrito fillings may include a large combination of ingredients such as Spanish rice or plain rice, boiled beans or refried beans, lettuce, salsa, meat, guacamole, cheese, sour cream and various vegetables. Burrito sizes vary greatly and some can be very large.

The word burrito means “little donkey” in Spanish, being the diminutive form of burro, or “donkey”. The name burrito, as applied to the dish, possibly derives from the tendency for burritos to contain a lot of different things similar to how a donkey would be able to carry a lot.

In other regions of Mexico, such as in the state of Tamaulipas, similar types of food are known as “flautas” (flute).

The precise origin of the modern burrito is not known. Some have speculated that it may have originated with vaqueros, the cowboys of northern Mexico in the 19th century.

In the 1895 Diccionario de Mexicanismos, the burrito or taco was identified as a regional item from the Mexican state of Guanajuato and defined as “Tortilla arrollada, con carne u otra cosa dentro, que en Yucatán llaman coçito, y en Cuernavaca y en Mexico, taco” (A rolled tortilla with meat or other ingredients inside, called ‘coçito’ in Yucatán and ‘taco’ in the city of Cuernavaca and in Mexico City).

An oft-repeated piece of folk history is the story of a man named Juan Méndez who sold tacos at a street stand in the Bella Vista neighborhood of Ciudad Juárez during the Mexican Revolution period (1910–1921), while using a donkey as a transport for himself and his food.

To keep the food warm, Méndez wrapped it in large homemade flour tortillas underneath a small tablecloth. As the “food of the burrito” (i.e., “food of the little donkey”) grew in popularity, “burrito” was eventually adopted as the name for these large tacos.

Another creation story tells of Ciudad Juárez in the 1940s, where a street food vendor created the tortilla-wrapped food to sell to poor children at a state-run middle school. The vendor would call the children his “burritos”, because burro is a colloquial term for a dunce or dullard. Eventually, the somewhat derogatory, but endearing, term for the children was transferred to the food that they ate.

Burritos were mentioned in the U.S. media for the first time in 1934, appearing in the Mexican Cookbook, a collection of regional recipes from New Mexico that was written by historian Erna Fergusson. In 1956, a frozen burrito was developed in Southern California.

Burritos are a traditional food of Ciudad Juárez, a city bordering El Paso, Texas in the northern Mexican state of Chihuahua, where people buy them at restaurants and roadside stands. Northern Mexican border towns like Villa Ahumada have an established reputation for serving burritos.

Although burritos are one of the most popular examples of Mexican cuisine outside of Mexico, they are only popular in the northern part of Mexico. However, they are beginning to appear in some nontraditional venues in other parts of Mexico.

Wheat flour tortillas (used in burritos) are now often seen throughout much of Mexico (possibly due to these areas being less than optimal for growing maize or corn), despite at one time being particular to northwestern Mexico, the Southwestern US Mexican-American community, and Pueblo Indian tribes.

My version of street burritos takes hints from Sonora, Mexico for the wrapper, !

The Sonoran flour tortillas are thin, very pliable, a little chewy and hold the ingredients in without breaking open. The  recipe for them was originally from thecookerman.blogspot.com, but it has been tweaked by TFD with cold water (a necessity for making tortillas with the right texture!) and Sonoran flour with cooking instructions from Serious Eats. I’ve cribbed the filling, salsa and Pico de Gallo recipes from hispanickitchen.com, am using a tweaked refried bean recipe from Serious Eats and a Mexican corn relish recipe from Emeril.

You can buy the rare Sonoran flour from here and the finest lard (rendered from Mangalitsa hogs) here.

Since this is a street burrito, it is served “dry” as opposed to “wet” – the sauces and salsa are on the inside, making it easier to eat without a plate or silverware. Yes, there are several sub-recipes needed to make this my way, but trust me – IT’S WORTH IT!

Citizens, I have every hope that you will love this recipe as much as I do – please enjoy it!