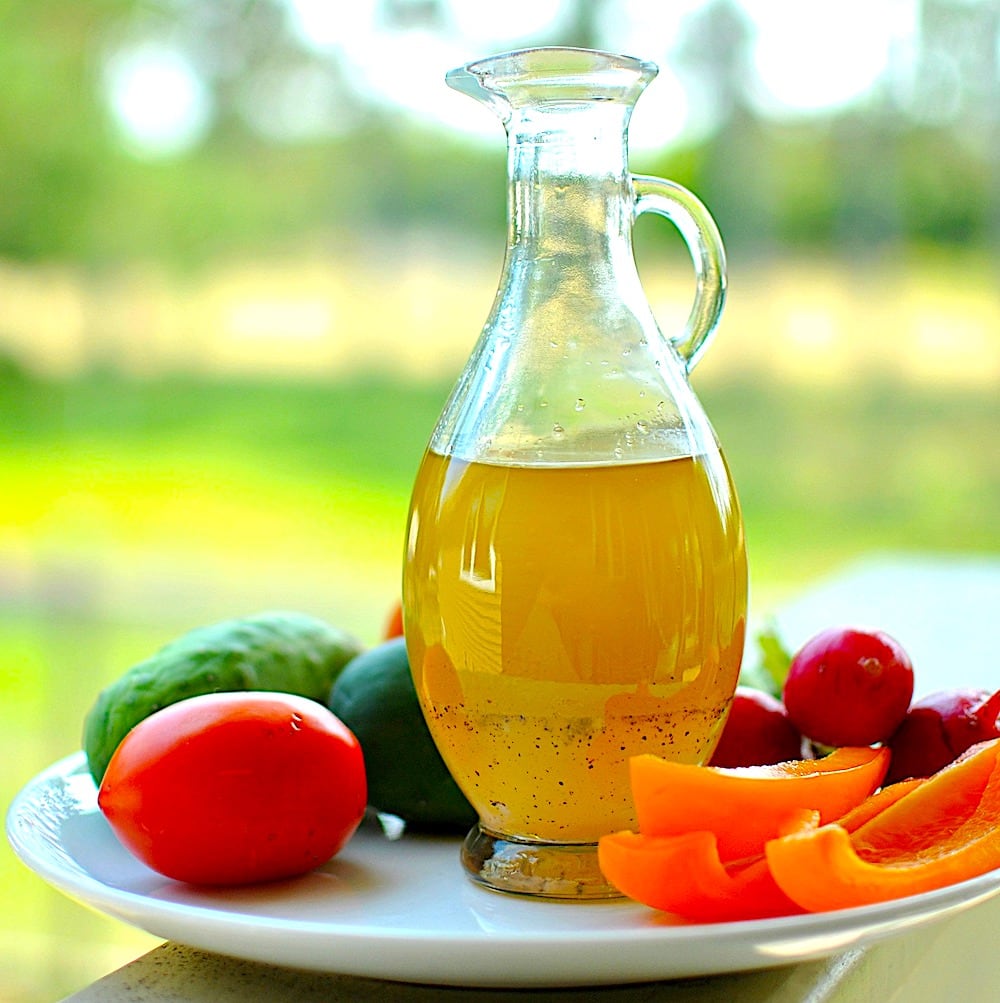 Citizens, your rarely under-dressed Leader – the sartorially resplendent TFD! – abhors salads that lack panache. This dressing hits all my flavor buttons and is a rare easy-to-make TFD creation!

Vinaigrette is made by mixing an oil with something acidic such as vinegar or lemon juice. The mixture can be enhanced with salt, herbs and/or spices. It is used most commonly as a salad dressing, but can also be used as a marinade.

Traditionally, a vinaigrette consists of 3 parts oil and 1 part vinegar mixed into a stable emulsion, but the term is also applied to mixtures with different proportions and to unstable emulsions which last only a short time before separating into layered oil and vinegar phases.

“Vinaigrette” is the diminutive form of the French word “vinaigre” (“vinegar”). It was commonly known as “french dressing” in the 19th century.

In general, vinaigrette consists of 3 parts of oil to 1 part of vinegar whisked into an emulsion. Salt and pepper are often added. Herbs and shallots are added, especially when it is used for cooked vegetables or grains. Sometimes mustard is used as an emulsifier and to add flavor. Some vinaigrettes use a small amount of sweetener, such as maple syrup.

Vinaigrette may be made with a variety of oils and vinegars. Olive oil and neutral vegetable oils such as soybean oil, canola oil, corn oil, sunflower oil, safflower oil, peanut oil, or grape seed oil are all common.

In northern France, it may be made with walnut oil and cider vinegar and used for Belgian endive salad.

In the United States, vinaigrettes may include a wide range of additions such as lemon, truffles, raspberries, sugar, garlic, and cherries. Cheese, parmesan or blue cheese being the most common, may also be added. Commercially bottled versions may include emulsifiers such as lecithin.

In Southeast Asia, rice bran oil and white vinegar are used as a foundation with fresh herbs, chili peppers, nuts, and lime juice.

In China and Japan, a similar salad dressing is made with sesame oil/sesame paste and rice vinegar. In north China, sometimes mustard is added to enhance the flavor and texture of the sauce.

Different vinegars, such as raspberry, create different flavors, and lemon juice or alcohol, such as sherry, may be used instead of vinegar. Balsamic vinaigrette is made by adding a small amount of balsamic vinegar to a simple vinaigrette of olive oil and wine vinegar.

In classical French cuisine, a vinaigrette is used as a salad dressing and, as a cold sauce, accompanies cold artichokes, asparagus, and leek.

I prefer my vinaigrette very strong, and this really fits the bill! Instead of mustard, I use mustard oil (please do not substitute any other mustard oil for the brand I specify, as they were not designed to be eaten and can hurt you), which keeps my vinaigrette perfectly clear.

Instead of vinegar, I extract the complex vinegar flavor from capers and also use horseradish and pickled shallots for even more punch. By pressing these and other ingredients in a French Press coffeemaker over a number of hours, I get all their flavor!

Try this over butter lettuce and be sure and add a goodly amount of flaky Maldon sea salt – you won’t be disappointed, Citizens! 🙂