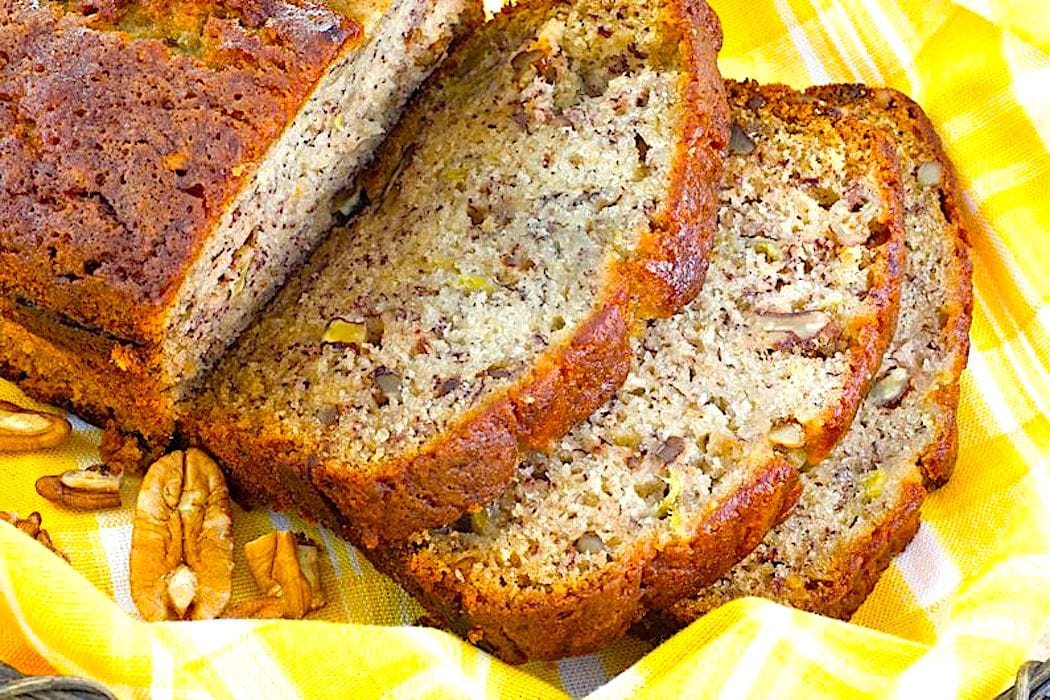 My Citizens, it was with the keenest of interest glittering in the steely eyes of the Resplendent One – YOUR TFD! – when He read a fascinating article in the BBC that described how not only has banana bread become the most searched-for recipe during quarantine, it is has also reached its apotheosis of flavor on the Hawaiian island of Maui!

Now, Maui holds a solemn place in the memory of TFD, for it was on this very island that He was trapped for nearly two weeks during 9/11. Slowly and with the unfolding of daily new inputs of horror, I watched as most food staples and gasoline, even cash at the ATM’s became more and more unavailable during the crisis – most people do not realize that most everything needed in the State like the aforementioned items and many others are brought in BY AIR. Enough with the old and painful memories of yore – let us instead focus on what is unequivocally the best banana bread recipe on the Internet – MY OWN!

As noted in the BBC article that sparked this recipe and post:

Maui has put its own spin on the creation, producing a spongy loaf, rich in banana flavour. It’s extra moist, more resembling dense cake then bread. Some bakers on the island add chocolate chips, macadamia nuts, strawberries, coconut or pineapple. Harold, though, keeps her bread simple. She follows a recipe from her mother, who probably got it from her mother, she said.

The baker’s not quite sure what makes Maui’s version so special but says it could be the locally grown bananas. She uses both the familiar Williams banana, a cultivar of the Cavendish, the world’s most common variety; and the apple banana, a smaller variety found across Hawaii that has a tangy taste and a creamy texture. Both grow in her backyard and are best when they begin to brown.

“The uglier they are, the sweeter they taste,” she said.

But there’s something more at play too, she suspects.

“People will take a bite and they say: ‘Remember when Grandma used to make banana bread?’ I don’t know if a lot of people do that now, but food tastes better if you’re making it as family together, really making it together from scratch.”

The history of banana bread is actually quite fascinating as well!

Banana bread is – of course – a type of bread made from mashed bananas. It is most often a moist, sweet, cake-like quick bread; however there are some banana bread recipes that are traditional-style raised breads.

Banana bread first became a standard feature of American cookbooks with the popularization of baking soda and baking powder in the 1930s. It appeared in Pillsbury’s 1933 Balanced Recipes cookbook, and later gained more acceptance with the release of the original Chiquita Banana’s Recipe Book in 1950.

National Banana Bread day is February 23. Bananas appeared in the US in the 1870s and it took a while for them to appear as ingredient items for desserts. The modern banana bread recipe began being published in cookbooks around the 1930s and its popularity was greatly helped by the introduction of baking powder on the market.

Some food historians believe banana bread was a byproduct of the Great Depression as resourceful housewives did not wish to throw away overripe bananas (as they were still a costly item to purchase), others believe the modern banana bread was developed in corporate kitchens to promote flour and baking soda products. It could also be a combination of both theories, insofar as being developed in a corporate kitchen to promote flour and baking soda products, as well as marketed as a method to make use of overripe bananas.

Now, to make my Maui banana bread version that is beyond any naysayers, doubt or hesitation the BEST atypical version of banana bread you’ll find, I start with the classic Maui recipe that calls for vanilla instant pudding for exceptional moistness. Don’t sneer – it works, it adds a subtle vanilla flavor I find quite alluring and did I mention it is MOIST?! Don’t skip this ingredient, though you could use sour cream if you fail to buy any pudding – it is, however easily purchased inexpensively and in quantity here.

My recipe calls for not one, not two, but THREE different sweeteners, not including the already sweet bananas: white sugar, brown sugar and in a nod to Maui as a home to pineapple, the syrup (not the juice!) of canned pineapple for both Island flavor and sweetness! Please note you should NEVER use fresh pineapple in baking, as there is a chemical in the fresh fruit that destroys gluten formation – the canned version and processed pineapple juice does not have it and is safe for baking.

In addition to vegetable oil, I also ingeniously add some extra-virgin coconut oil as well to add a hint of the tropics to the flavor and to increase the moistness of the loaf – this is my preferred brand. To increase the nutty flavor and again to tie back to Hawaii, I call for some macadamia nut butter to be mixed into the batter – I like this brand, personally.

An extremely important note here! Macadamia nuts are incredibly toxic to dogs, please make sure not to feed your hound any of this recipe and make sure none of the macadamia butter falls on the floor!

Banana bread isn’t complete without some whole nuts in it as well and as a traditionalist in this area, I only endorse walnuts of the top quality – these are excellent. I also add in more than a little freshly-grated nutmeg, as I find it works extraordinarily well in this recipe.

Citizens, quarantine cooking does not have to be stressful or difficult – this recipe comes together in minutes (an admittedly rare thing to observe in a TFD recipe!) and is beyond delicious – it truly is the ULTIMATE non-traditional banana bread you’ll ever find and I hope you and yours find favor with the flavor of my incandescently brilliant creation! For the best CLASSIC banana bread, you can do no better than my beloved wife’s Texas-kissed recipe with pecans here.