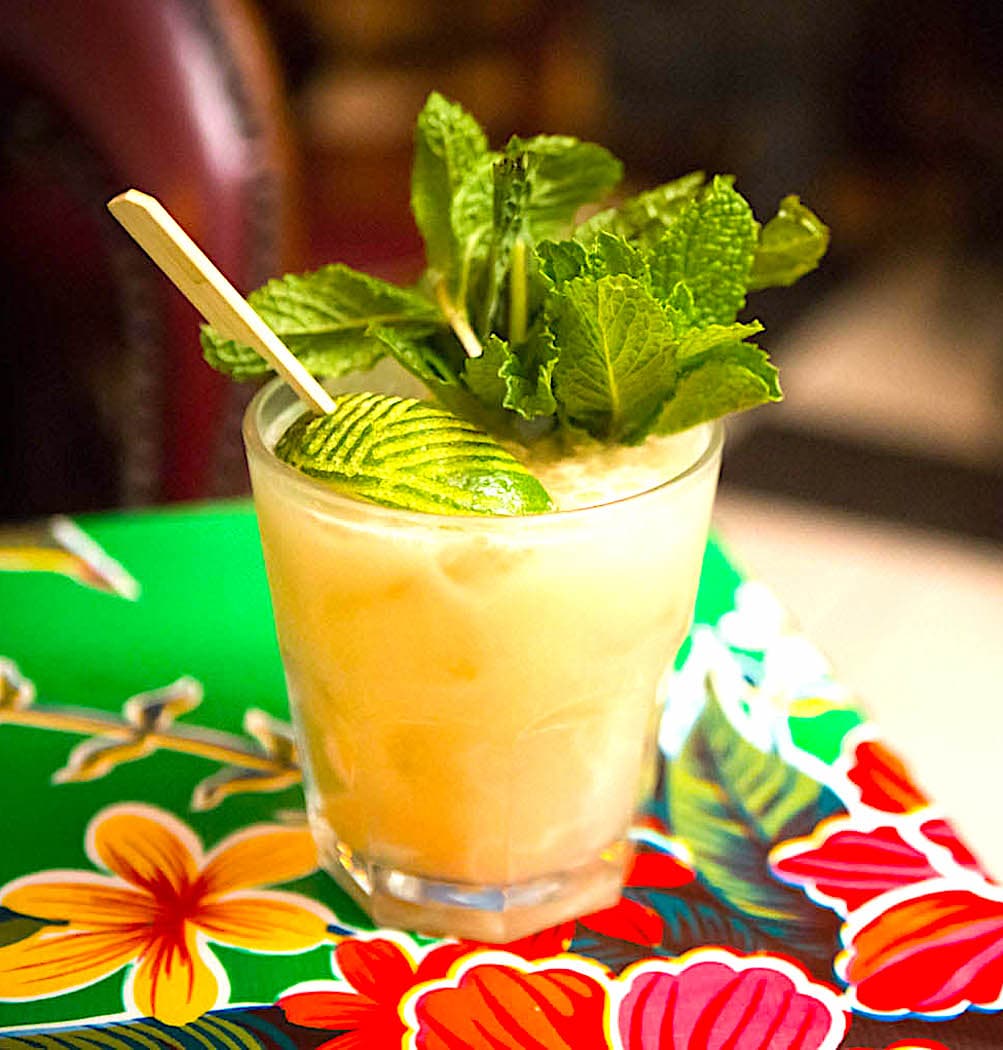 My Citizens, I only rarely share my recipes for alcoholic beverages here on the blog, primarily for two reasons. One, they’re some of my best and I like to hold those close to the vest, and second because for some odd reason, my drink recipes rarely get as many likes or shares as my food recipes. Yes, this is indeed one of my favorites and it’s high time to share it, likes be damned! 😀

The Mai Tai is a cocktail based on rum, Curaçao liqueur, orgeat syrup, and lime juice, associated with Polynesian-style settings. Victor J. Bergeron claimed to have invented the Mai Tai in 1944 at his restaurant, Trader Vic’s, in Oakland, California.

The name was allegedly taken from maita’i, the Tahitian word for “good” or “excellence”, although the drink is usually spelled as two words, sometimes hyphenated or capitalized.

Most current recipes for Mai Tais based on Trader Vic’s 1944 recipe include rum, lime juice, orgeat syrup, and orange liqueur (typically orange curaçao). Any deviation from this specific combination of ingredients is an abomination in the eyes of your God, your Country and Your Dictator. DON’T DEVIATE! 🙂

While purists correctly point out that you can’t really alter the classic recipe for a Mai Tai (although a SLIGHT variation in the amount of some ingredients is acceptable), you do have flexibility in the brands of liquor you choose and the overall quality of the ingredients you use.

For an interesting and humorous description of one man’s search for a REAL Mai Tai, visit here for a now-deleted (but mercifully archived) article from 2000 that pretty much sums up how obsessive people can be about their mai-tai’s!

Here is an excerpt from the start of it:

You people should be ashamed of yourselves. I’m a betrayed and angry man. We all know that standards in this country have plummeted to depths known only by the dead bloated body of Leonardo DiCaprio. But this is too much. As my buddy Roddy Piper would say, it’s time to kick ass and chew bubble gum–and I’m all out of bubble gum.

I speak, of course, of the Mai Tai.

The Mai Tai is our greatest American cocktail. It doesn’t have an ounce of single-malt Braveheart wheat-juice in it. It has nothing to do with the latest cranapple-flavored Rooskie pseudo-vodka sloshed out of bottles by guys named Evan.

The Mai Tai doesn’t come from some candy-ass gun club lounge where racehorse owners talk about debentures in Singapore while sipping “juleps.” A Mai Tai, properly made, is strong enough to put permanent fissures in a fat man’s brain, yet delicate enough to make his girlfriend try to conjugate verbs with her thighs. The ingredients might come from the Caribbean.

The South Pacific might have made it famous. But the Mai Tai comes from California and is so by-God American that any bartender who can’t make it should be shot for treason.

Like Joe-Bob, I am incredibly picky about my Mai Tai’s and other obsessive aficionados concur that mine is even better than the one now typically served at Trader Vic’s!

This is how I do it at Chez Hirshon, and I believe it makes the ultimate Mai Tai – try it and see if you agree. Don’t forget to tip your cap to the one-legged mariner (i.e. Trader Vic) for coming up with this superb drink!

As you sip, meditate on life’s goodness as your hammock sways gently to tropical breezes, redolent with the scents of coconut and spices. Feel the welcoming shade of your beach cabana, as the vivid hues of the tropical sunset fade to a twilight blush around you. Hear the crash of the surf – a gentle roar in the distance – and the tropical birds serenading you to a gentle slumber as evening falls.

We may not have any of that in San Francisco, but after one or two of these drinks – trust me, you’ll see and hear all of the above – and more!

I specify two distinct rums that are perfectly matched and balanced – do NOT substitute any other brand for these if you want to make my perfected version! You want 15-year old Haitian rum from Barbancourt brand – buy it here – plus 12-year old Venezuelan anejo rum from Ron Abuelo, buy it here. Orgeat syrup is a key flavor in this drink and only the best will do, which of course is my homemade orgeat. Failing that, this brand is the only commercial version I can recommend and it is quite good indeed.

Citizens, enjoy this blast from the past cocktail that is truly one of the world’s finest drinks – my version is guaranteed to put a smile on your face, pronto. 🙂