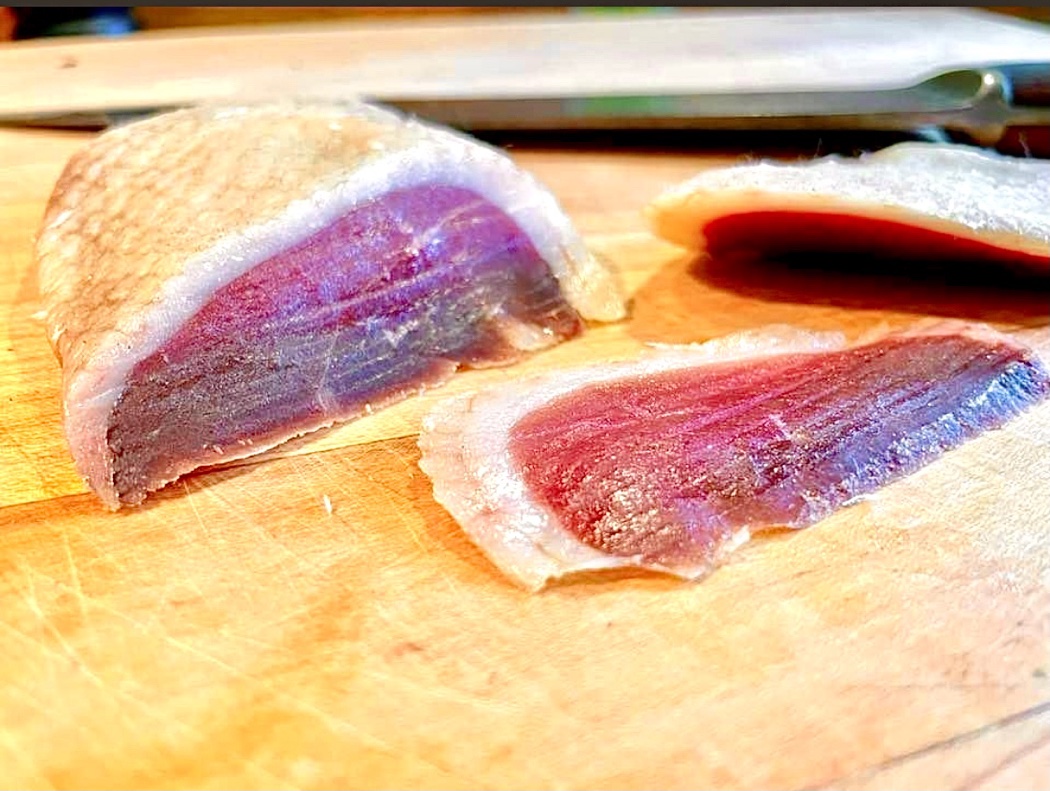 My glorious Citizens! We are now nearly ½ way through the holiday of Hanukkah and one would expect the Janissary of Judaism – YOUR TFD! – to post an apropos fried recipe of some sort for the holiday, but I walk to the beat of my own eclectic drummer! This recipe for duck prosciutto is one that I have been meaning to post for some time now, and I feel compelled to bring it to your fullest attention as a surprise Jewish recipe for the holidays and one that is surprisingly easy to make.

I speak of nothing less than the Hebraic alternative to pork prosciutto – and trust me, duck prosciutto is a whole new taste sensation for the members of TFD Nation! Duck (originally it was made from goose breast) prosciutto was traditionally made by medieval Jews in Italy starting on Hanukkah and thus, it is indeed a worthy recipe to share during the holidays! As you might have surmised by now, this was a recipe created by Jews as they attempted to integrate the dishes and recipes of their gentile neighbors into a kosher cuisine that – of course – forbids pork in all forms.

As noted in a fascinating article on Tablet Magazine’s website:

Somewhere in the countryside outside Milan, in an abandoned farm owned by my family, I’m raising geese. It’s a rather bizarre activity for a city girl like me, but one that will allow me to keep alive an ancient tradition of the Jews of northern Italy: producing homemade kosher charcuterie out of goose meat.

I’m raising my own geese because getting one’s hands on kosher goose meat in Italy is pretty complicated: The meat has to be ordered from France, takes forever to arrive, and costs an indecent amount of money. Even in nonkosher supermarkets and butchers, the humble goose is hard to find, and that’s for the simple reason that nobody cooks goose—kosher or not—at home these days. Most households prefer beef, lamb, and chicken, as they are easily available, conveniently portioned, and simple to cook.

However, this hasn’t always been the case in Italy. Food preferences have shifted over time. All over Lombardia and Veneto, northern regions whose humid environment makes raising geese an obvious choice, farmers and butchers have produced prosciutto and salami from goose for generations. What most people ignore is that it was the local Jewish population who came up with the idea to use goose to prepare delicacies that were otherwise normally made with pork.

In the late Middle Ages and during the Renaissance, many Jews who were fleeing persecution from all over Europe resettled in northern Italy, especially in the cities of Venice, Ferrara, Mantova, and Pavia, and their dietary restrictions ended up influencing the local cuisine. Since pork was banned by Jewish laws of kashrut, Jews started commissioning the local butchers to create some special kosher charcuterie made only from goose, an animal that was commonly farmed all over the region.

These “goose-only” cold cuts and cured meats were produced and sold very successfully until shortly after the expulsion of the Jews from the Duchy of Milan in 1597, when Christian butchers reintroduced pork into the mix to make their products less expensive.

Today, finding charcuterie made from goose is nearly impossible. There are a couple of places in Italy that still produce what they call “ecumenical salami,” appreciated mostly by the Muslim population, and some goose prosciutto with the old Jewish recipe (unfortunately not kosher-certified), but these precious and ancient Jewish specialties are on the verge of disappearance. The Jewish communities of Italy are slowly disappearing, their population is aging, and there isn’t much interest in preserving the local culinary history.

I learned my way around goose meat from Anna Campos, one of the last remaining custodians of the tradition. Campos heads the Venetian chapter of the Women’s International Zionist Organization, and feels strongly about preserving the Jewish culture of her hometown. Venice has been home to a lively Jewish community for hundreds of years, but its outlook is rather grim: The Jewish population shrank from 5,000 in the 17th century to 1,200 by the outbreak of WWII, and today there are about 450 Venetian Jews left.

Campos is one of the few people left in town who still cherishes the old customs and knows how important it is to pass them on to the next generation. That’s why she gathered a small group of people eager to learn the art of kosher salami-making in the community center of Venice, where I met her.

Campos explained to us that geese—locally nicknamed “the pork of the Jews”—have historically been exploited thoroughly for their culinary potential: Not the smallest bit of the precious animals would go to waste. Legs and breasts would be seasoned with allspice, placed in stone containers, and covered in salt to make prosciutto. Smaller in size than their nonkosher counterparts, kosher prosciuttos were dried and seasoned for a relatively short time; they would traditionally be prepared around Hanukkah and kept in a cellar for three to four months, to be served right on time for Passover.

With breasts and legs allocated to prosciutto, most of the remaining meat and part of the fat would be ground and stuffed into the skin of the neck of the goose (or, even more intimidatingly, inside the esophagus), to make a salami.

Citizens, unlike trying to make prosciutto from a pork leg over 2-3 years (something I only recommend to semi-pros in charcuterie), a duck breast is far smaller and cures in only a week or two and can be done without any special equipment or real skill (I mean this in a positive fashion, as I do not count myself as a semi-pro in charcuterie and even I can make this recipe with ease). The spicing – of course – reflects TFD’s magic in this area and includes my suggestion to use long pepper instead of pedestrian black pepper (long pepper is far superior, IMHO). Black pepper is just fine, but if you want to try long pepper you can buy it here. Fennel pollen can be bought here.

There are two different ways to make duck prosciutto – the easy way and the more involved way (which is still easy, but is a bit more work and gives a superior product). If you decide to follow the easy way, you just need plastic wrap, salt, spices, two weeks of time and of course a quality fresh (not frozen) duck breast or two – these are my favorites. The more involved way to make duck prosciutto involves cheesecloth, a suction cup hook and butchers twine – details are in the recipe. This YouTube video has a very clear description of how to wrap the duck breasts for hanging – start at 2:08.

This is a truly delicious item – homemade duck prosciutto has a long and distinguished history in Italy thanks to generations of Italian Jews whose need for assimilation (and hunger for delicious food!) made this recipe possible in the first place. Consider serving this – sliced paper thin, of course – as part of a charcuterie plate, perhaps with some delicious potted shrimp as another unique dish to serve to your guests on that platter of meaty deliciousness!