February 27, 2022 update – a few hours after making this post, Maxim Doroshin (who is bravely fighting in Ukraine!) sent me this powerful image – vyshnivka for victory indeed!

Citizens…you are all-too-aware that Ukraine has been invaded and for the first time since the 1940’s – Europe is once again embroiled in war against the forces of evil. I as the leader of a TFD Nation united under the peaceful banner of world gastronomy stand aghast at a return to the horrors of war. My Jewish roots decry all forms of tyranny in a region that I have close personal ties with due to my ancestry and travels alike. Politics is a dangerous game – but this kind of naked aggression MUST be fought and communicated or – just as in WW II – we are complacent by our silence as evil stalks the Earth and good people do nothing.

My sympathies lie with all of Ukraine and its heroic people, and with the Russian patriots who have bravely chosen to voice their opposition to Putin to stand in solidarity with their brothers and sisters across the border. I stand in mute horror at the resurgence of jackboots on the continent, and in awe at the unparalleled bravery of the Ukrainian people and their leadership – truly, the Jewish President of Ukraine has become a legendary figure (NEVER AGAIN!) and the names of Zelenskyy (President of Ukraine) and Klitschko (Mayor of Kyiv) shall assuredly be inscribed forever on the roster of heroes and as rallying cries against tyranny of all forms!

There will be much blood shed over the next few days – sadly, most of it innocent. The images of red blood spilt on snow has haunted Me for days, and has helped to crystallize the decision as to what recipe to post on behalf of the Ukrainian partisans.

I have visited Ukraine in the past, and have raised a glass of their unmatched cherry vodka, known as ‘vyshnivka’; in both Lviv and Odessa. Today, I share My recipe for this most luscious of Ukrainian alcoholic beverages in the hopes that you too will raise a glass to the brave men and women of Ukraine as they do their utmost to protect their country and their lives in the fight ahead! The scarlet red of this cordial should remind everyone of the blood being spilt and exactly what is at stake in this conflict – the freedom of Ukraine, and the protection of democracy against tyrants of all forms!

As noted in this excerpted history of Ukrainian spirits I found at coppercustomstillcomponents.com.au:

The traditional beverages in Ukraine prior to the appearance of distilled alcohol were ‘med’ (mead), ‘pyvo’ (hopped beer), ‘braha’ (unhopped millet beer), ‘kvas’ (generic name for fermented beverages, usually from fruits, berries and beets), ‘syrivec” (bread kvas), ‘syta’ (honey diluted with water), ‘uzvar’ (fruit compote), ‘berezovyj and klenovyj sik’ (fermented birch and maple sap). The term ‘vyno’ (wine) was used for imported grape wine, and being imported only the affluent could afford it.

In early Ukrainian folk sources, the hyphenated form ‘med-pyvo’ (mead-beer) denoted an abundance of alcoholic beverages, but with the decline of village brewing due to a state sponsored monopoly on alcohol, and large scale commercial breweries, this was later changed to ‘med-vyno’ (mead-wine) and ‘med-horilka’ (mead-vodka). The ‘vyno’ in ‘med-vyno’, probably refers to the term ‘harjache’ or ‘palene vyno’ as ordinary villages could not normally afford imported grape ‘vyno’.

Political and economic factors influenced the growth of distilleries in Halychyna (Galicia) in the 18th century. The partition of Poland cut off former markets and created the need to use surplus grain, previously exported. In 1836 there were 4,981 distilleries in Austrian controlled western Ukraine, while in the Kiev gubernia there was one ‘shynka’ (tavern) for every 597 inhabitants. Alcohol abuse was a sympton of the oppressive political situation, but it did fill the state coffers handsomely.

Ivan Kotljarevskyj in his ‘Enejida’ mentions ‘slyvjanka’, ‘prosta horilka’, ‘perehinna’, ‘tretjoprobna’, ‘tjutjunkova’ (tobacco flavored), ‘pinna’, ‘kalhanka’, ‘med’, ‘pyvo’, ‘braha’, ‘syrivec”. He also mentions other flavoring botanicals – juniper, star-anise, aniseed, pepper and saffron. ‘Kalhanivka’ is a horilka that has been flavored with the root of the herb ‘kalhan’ (aka ‘perstach prjamostojachyj’). Its English name is tormentil (Tormentilla erecta or Potentilla tormentilla). It was a popular horilka in the past, as tormentil was regarded as a cure for many ailments, especially haemorrhaging, and so for fighting cossacks it was useful.

Home distillation (samohon) is currently legal in Ukraine, and mash bills that were previously transmitted orally are now published.

Ukrainians – like so many Slavic cultures – have many customs surrounding how to drink and how to toast. These are the general rules for Ukrainian drinking!

1. The one who pours shots the first time around becomes the official pourer of shots for the rest of the evening. It’s considered bad luck to pass this responsibility on to someone else.

2. The first toast usually belongs to the host, who will effusively express thanks to the guests for joining him or her that evening.

3. There shouldn’t be a long pause between the first and second toasts. You may hear your companions say “mehzdy pervoi i vtoroi, pererefchik ne Bolshoi” – a reminder to get on with the drinking. There’s no obligation to toast to any certain thing the second time around, but the third toast is traditionally for women.

4. Speaking of toasts, among certain company the toasts may be short and to the point- “To friendship! To us!” Most of the time, though, toasts are long, eloquent, and heartfelt. Be prepared for this before it’s your turn to toast and you’ll likely win a couple extra smiles from your friends.

5. Should you by chance wind up at a Ukrainian funeral, there will be drinking and toasting after the burial, albeit in a very somber and ceremonial way. As it’s thought extremely bad form to clink glasses at such an event, the toasting is more of an aerial salute.

6. When a bottle of wine, champagne, or vodka is empty, the bottle is removed from the table and placed on the floor. This act supposedly comes from a French custom of hiding empty bottles under the table in order to cheat the bartender, since the bartender would tally up the empty bottles on the table before bringing out the bill. Also, now is your chance to grab the empty bottle and blow into it while making a wish.

It’s not guaranteed to come true, but it’s worth a shot!

7. Tapping your finger on the side of your neck implies drinking. It could mean anything from “Let’s drink” to “look at that drunk guy across the street…” to “My boss is drinking whiskey in his office right now”. People claim the gesture originated during the days of Peter the Great. After performing a favor for Peter the Great, a sailor was asked what he wanted as a reward.

He replied that he wanted free booze for the rest of his life. Peter complied and gave him an official note entitling the sailor to free drinks anytime, anywhere. Of course, the sailor quickly lost the note after his first drinking binge and returned to Peter asking for a new note. Peter refused to write a new note but instead had the man’s neck tattooed and issued a law that anyone with such a tattoo be served for free. For the rest of his life, the lucky sailor simply had to walk into a bar and tap his neck and he would be able to drink to his heart’s content.

Now as to Vyshnivka – it was the staple tipple at a famous bar in Kyiv known as ‘Piana Vishniya’ and it was reputed to be a ‘love potion’ par excellence since the 17th century! 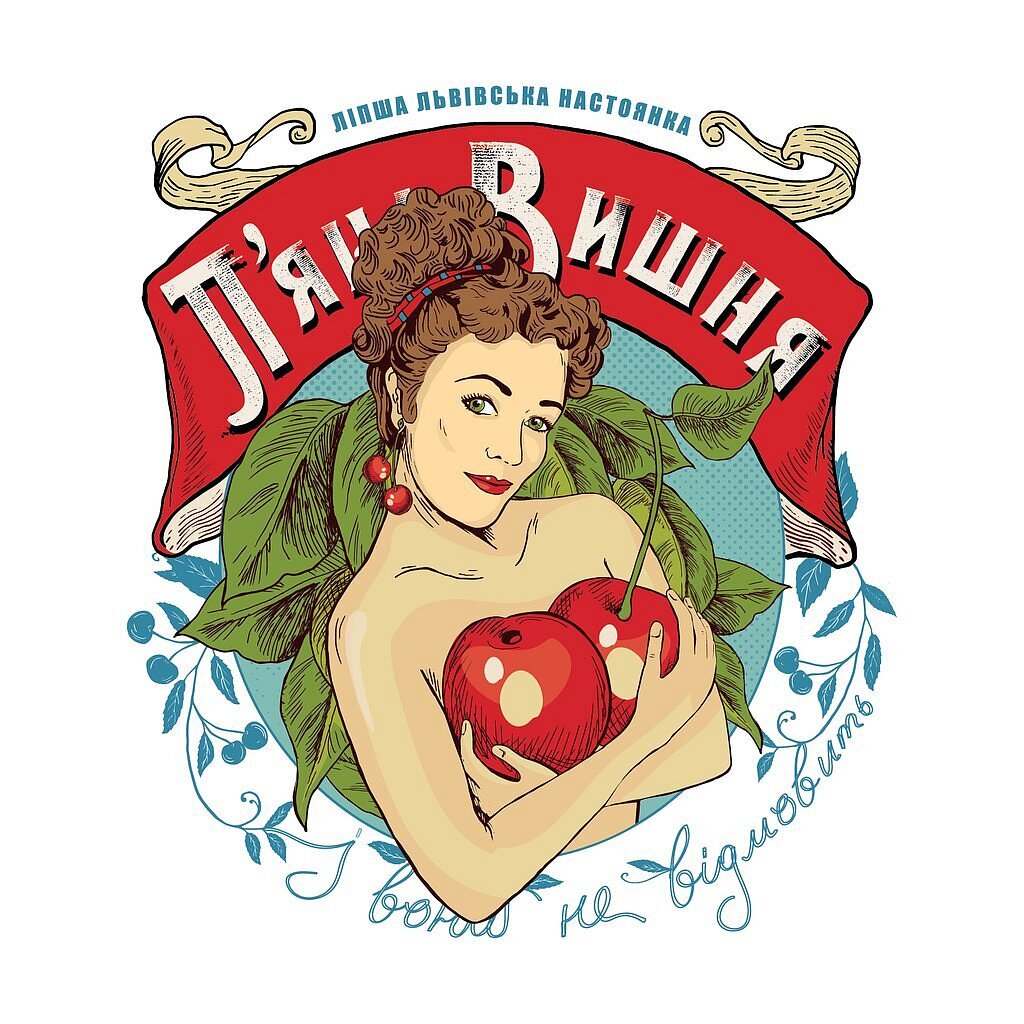 That bar today stands deserted, the vyshnivka no longer flows and the women, children and elderly of Kyiv huddle in fear in the subway tunnels under the city as their men battle in the streets. The ‘Paris of the East’ is no more, though I hope for its phoenix-like resurgence in the future from the flames of combat ravaging its body politic.

To properly make vyshnivka involves only sour cherries (be sure they are sour, or you’ll end up with a drink reminiscent of cough syrup!), sugar, vodka and a few spices – and time. You will absolutely want a high-proof vodka for this recipe – obviously, one that is not Russian – this is my recommendation.

My Citizens – the world is at an inflection point not seen in many decades and poised to tilt axially in the direction of peace or war. Do what you can to help the besieged Ukrainians by donating what you can at this link – they will thank you and so will I! Join Me in raising a glass of vyshnivka (ready 365 days from today!) to the heroes and heroines of Ukraine in their just struggle against oppression – may the sweetness of the drink inspire, may the alcohol fortify and may God have mercy on all of our souls… For more Ukrainian recipes, including a Jewish Ukrainian Borscht recipe I hereby dedicate forever to Zelenskyy, please click here.

TFD currently has a total of 1,351 posts and 1,128,563 words written since December of 2014! Add your voice to My 50,000+ dedicated readers, comment on My recipes and thus become an active member of TFD Nation! Looking for a particular recipe? Search for it in the box above or via the category tags below - there are THOUSANDS of the finest in world and historic recipes here!

Manage Cookie Consent
Citizen! Please be advised that TFD uses technologies such as cookies to store and/or access device information. We do this to improve browsing experience and to show personalized ads. Consenting to these technologies will allow us to process data such as browsing behavior or unique IDs on this site. Not consenting or withdrawing consent, may adversely affect certain features and functions. Your loyalty to the cause is noted!
Manage options Manage services Manage vendors Read more about these purposes
View preferences
{title} {title} {title}
909
SHARES
FacebookTwitterWhatsappPinterestMailYummlyFlipboard