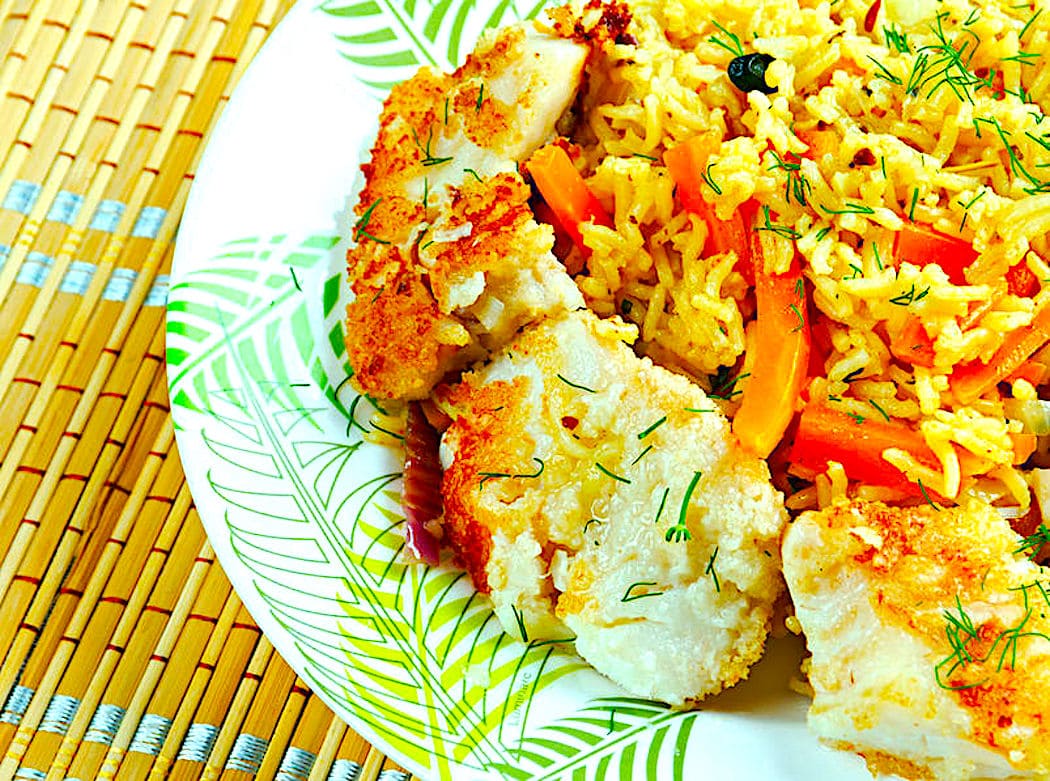 Citizens – few things excite the Nabob of Numbers – the always analytical TFD! – more than reviewing His server logs to discover where new visitors are from as they quest for gastronomic perfection of the highest order! . Yes, Turkmenistan – you have resisted the siren song of my culinary magnificence in 2019.

Today, however, I intend to fix that with a fantastic recipe from this far-off land that was once a primary destination on the Silk Road of distant times! After today, the 2019 incarnation of TFD Nation shall and MUST contain members of every land on Terra Firma – !

Today’s recipe definitely deserves your full attention, ! In Turkmenistan, the fish of choice for any banquet is the mighty Sturgeon, the source of caviar and probably the meatiest fish you’ll every try with its dense and flavorful flesh!

The traditional Turkmenistan cuisine is renowned for its dishes based on fish. The most popular types of fish used are catfish, grey mullet, zander and sturgeon. Fish is generally combined with rice, raisins, apricot and sesame.

Fish dishes are popular among Turkmen living on the shores of the Caspian Sea. They mainly use sturgeon, beluga sturgeon, herring, stellate sturgeon, sea and river pike, perch, catfish, mullet, sazan and kutum caught in the Caspian Sea and the rivers that flow into it.

The pilav made in the Caspain Sea region is often cooked with fish. The type of fish used usually depends on what fresh just-caught fish are available. These fish can be roasted on a roasting-jack, fried in cauldrons, or dried, stewed or boiled. Fish is normally served with sweet-sour sauce and spices.

Turkmenistan pilav is served with sauce made from sour plums called tkemali, and pomegranate juice.

As further noted on factsanddetails.com:

Turkmenistan has develop under the influence of its unique history and geography. The traditional Turkmen nomadic lifestyle and the severe conditions of living in the desert have both shaped the culinary traditions of Turkmenistan. Among the main features of Turkmen cuisine are its simplicity and low cost both in terms of ingredients and cooking methods.

Turkmenistan national cuisine has a lot in common with cuisines of other Central Asian people, particularly the Uzbeks and Karakalpaks. However, it differs from them in a number of features, namely the large variety of fish dishes owing to Turkmenistan’s location on the Caspian Sea. Turkmen use different vegetables than Uzbeks and Tajiks and eat them in different ways. Radish and tomatoes are used more often. Onions are eaten raw and used as a seasoning. Pumpkins and carrots are rarely used.

Turkmen like to use mutton fat and sesame oil for frying and cooking meat, course-grain dishes sweets. The spices used in Turkmenistan are slightly different from the ones used in Uzbekistan and Tajikistan. Turkmen widely use red and black pepper, mint, wild parsley, azhgon (a spice also known as jowan caraway, bishop’s weed or carom that originated in the eastern Mediterranean, possibly Egypt), and buzhgun (the galls of a pistachio tree). Instead of turmeric, Turkmen use saffron and garlic.

As is true throughout Central Asia, Turkmen drink a lot of tea. Green tea (gok chai) is drunk all the year round, at all hours. In the Turkmen language, “chai” can refer to eating a meal or sitting down for a visit. Black tea (gara) is also consumed by Turkmen, but enjoyed mainly in autumn and in winter – it is more popular in western Turkmenistan than in the eastern part of the country.

Black tea is sometimes brewed with camel milk on coals. Traditionally, every tea drinker had his own china teapot and cup. In the Dashoguz region, it is sometimes drunk “Kazakh-style” with milk, often to disguise the salty taste of the drinking water in that area.

Turkmen prefer camel and sheep milk. Cow milk is used for making “gatyk”, a special kind of sour milk. A thick drinking yogurt similar to kefir, gatyk is often served with breakfast and sometimes used as a condiment on börek or manti, replacing the traditional sour cream. Most dairy products are served with soups and main courses.

Sherbet is a traditional drink of Central Asia. In the old days, it was prepared from Cornelian cherries, or rose hips with the addition of spices. Today, sherbet is made from fruit juices with spices and ice cream.

Bekmes is a syrup or fruit juice concentrate made without added sugar. Often referred to as fruit honey, it is consumed both as a tasty drink, dessert topping or a dessert in its own right. There are many recipes to cook bekmes. Each Turkmen tribe has its own that takes into account which berries or vegetables are available in their region. “Berzenghi” is a popular mineral water.

This particular recipe is from the Caspian Sea region, where sturgeon remain plentiful and cheap – neither of these are true anywhere else. Given the expense, I recommend the closest (and still not cheap but cheaper than sturgeon) textural and flavor substitutes: Chilean sea bass or monkfish. Unlike any other pilaf recipe from the region, this one uses sour cream to make a flavorful sauce for the fish – it is quite delicious and a great change of pace from the standard.

I’ve come up with a recipe that I am quite sure pays suitable homage to the original in terms of flavor, spicing and texture. Georgian yellow tkemali (spiced sour plum sauce) is an important part of this dish – you can buy it here. Urfa biber pepper may be purchased here and ajwain (Bishop’s weed) seeds may be bought here. My favorite brand of sesame oil is Kadoya and it may be purchased here.

Citizens, let us unite the entirety of the world under the mantle of TFD Nation – Turkmenistan, join us in unity today with your brothers and sisters of gastronomic fervor! If you prefer meat to fish but still want a sample of this unique cuisine, try the unmatched Turkmenistan shashlik recipe instead!