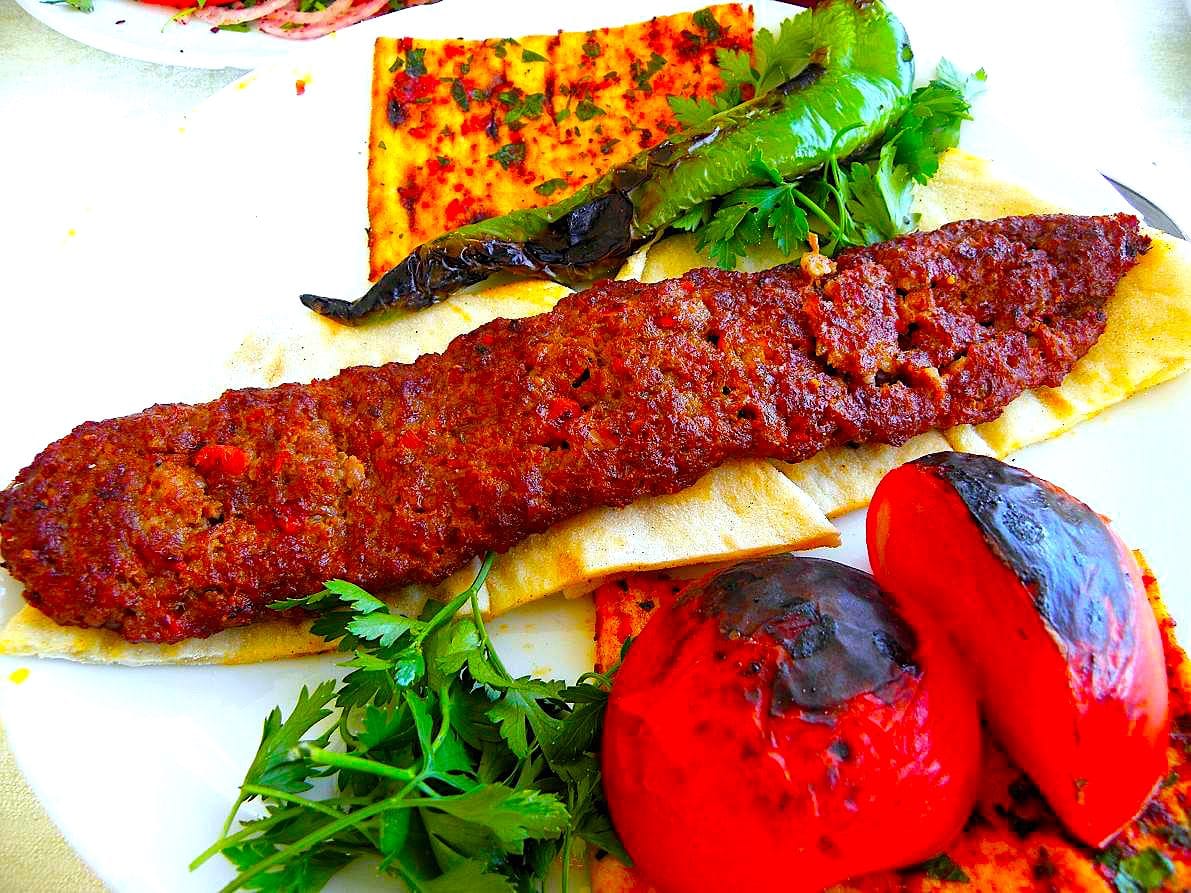 Citizens, few things evoke greater hunger pangs in the Summer than the thought of enjoying a delicious, roaring-hot off-the-grill shish kebab, redolent of smoke and spice! Now, allow me to share with you what may be the ultimate form of shish kebab – straight from the gastronomic wonderland that is Turkey!

Adana kebabı (colloquially known as Kıyma kebabi) is a long, hand-minced meat kebab mounted on a wide iron skewer and grilled on an open mangal filled with burning charcoal. It is named after Adana, the fifth-largest city of Turkey and was originally known as the “Kıyma kebabı” (lit: minced meat kebab) or Kıyma in Adana-Mersin and the southeastern provinces of Turkey.

Kebabs are usually made out of ground lamb meat and the fat from a fat-tailed sheep, though there are many regional variations. Kebabs are fairly common in the area from Mersin in Turkey to Kirkuk in Iraq, and includes Aleppo in Syria.

According to many authors, this kebab was born out of a fusion of Turkish and Arab cultures. Birecik, once an important locality in the Eyalet of Aleppo, is said to be the creator of this very kind of kebab.

The version prepared and consumed today in the province of Adana also has a history rooted in the modern Turkish culture, only to receive a “Controlled Designation of Origin” in February 2005, after subsequent legal trials.

According to the Patent Registrar, an original Adana kebabı is made only by a vendor who has successfully passed an inspection conducted on the spot by the Adana Chamber of Commerce.

The Kıyma kebabı is still prepared in its historical location. Similar dishes are prepared in neighboring zones of Turkey, Syria and Iraq, where the meat is hand-ground with the addition of tail fat and occasionally a non-spicy capsicum.

New variants of the Kıyma kebabı, not protected under the same patents, have been enjoyed since the 1950s, in communities in the former Ottoman Empire territories, including Istanbul, Baghdad, and Damascus. These versions are adapted to the local tastes and cannot be considered the original Kıyma kebabı.

In Istanbul, and other Turkish communities outside of Adana and Aleppo, a Kıyma kebabı is either an “Adana kebabı” (the spicy variant) or an Urfa kebabı (the non-spicy one). The original Adana kebabı was not spicy at all, and Urfa kebabı did not exist, even in Urfa, where the local variation of Kıyma kebabı is called Haşhaş kebabı.

According to the Designation of Origin, Adana kebabı is made from the meat of a male lamb that is younger than one year of age. The animal has to be grown in its natural environment and fed with the local flora.

The meat should then be cleansed of its silverskin, nerves and internal fat. After the cleansing, it should be cut into rough shanks and, along with tail fat at a proportion of one to five, be laid to rest for a day.

The next day, the rested meat and fat must be ground by hand, using a crescent-shaped iron cleaver known as the “Zırh”. Only sweet red peppers (also hand chopped with the Zırh) and salt should be added. The Designation of Origin also authorizes, “under certain circumstances”, the addition of spicy green capsicum and fresh garlic cloves.

The meat will then be thoroughly kneaded together with the fat, the salt and the additional ingredients until reaching a homogenous consistency.

After reaching homogeneity, the mixture is placed on iron skewers that are 0.5 cm thick, 3 cm wide and anywhere from 90 to 120 cm long. One portion of Adana kebabı is typically 180 grams of meat on one skewer. A “portion-and-half”, impaled on slightly wider skewers can not include less than 270 grams, as per the designation label.

A little water allows the minced meat to adhere better to the skewer, which is the hardest step in the making of this kebab. If not done properly by an Usta, the meat will separate from the skewer during roasting.

The impaled skewers are roasted over flame-less coals of oak wood. When the meat turns dark brown, it is ready. The skewers are frequently turned during this process. The melting fat is collected on flatbread by pressing pieces of flatbread against the meat as it roasts; this also serves to heat the bread.

The kebab is commonly served on a plate, as a “Porsiyon”, or wrapped in flatbread, as a “Dürüm”.

In the Porsiyon method, the kebab is served over the flatbread used to catch the drippings. It is accompanied by roasted tomatoes, green or red peppers and julienned onions with parsley and sumac.

Other typical mezes in Adana-Mersin served with the kebab include red pepper ezme with pomegranate molasses, fresh mint and tarragon leaves, braised shallot hearts with olive oil and pomegranate molasses, pickled small green chili peppers, and, around Mersin, green shallot stems with slices of bitter orange, citron, lime and lemon. Many restaurants around Adana will also bring hot hummus with butter topped with pastırma on the side.

The way to eat “Porsiyon” is to skin and crush the charred tomatoes and peppers into a paste, to put them in a piece of flatbread with part of the kebab, topped by a generous pinch of the onion-sumac-parsley mixture, and to wrap the whole thing into a few small thick dürüms.

Dürüm – the browned kebab is taken out of the mangal, removed from the skewer and placed on top of a large loaf of flatbread (mostly lavaş or tırnak pidesi), topped by a pinch of julienned onions, small diced tomatoes, some parsley, then sprinkled with a little salt, cumin and sumac and finally wrapped into a long roll.

To make a proper Adana Kebab, you will ideally need the special ‘Zirh’ knife. It looks like a big Mezzaluna Knife, similar to that used in Italian cuisine. The purpose of using this special knife is to combine ‘lamb meat cubes’ with the ‘tail fat’.

The action of using ‘Zırh’ knife and combining the ingredients is known as ‘Zırhlama’. This is the most important part of making a delicious Adana Kebab. A zirh knife is known as zirh bıçağı in Turkish – with my version of the recipe, you won’t need it but if you want one, you can buy one here.

The kebabs are served together with bulgur pilaf, lavaşh bread and an onion salad. Grilled tomato and carliston chili pepper (banana pepper) can also be served alongside.

Sadly, it is impossible to find a source in the U.S. that consistently has availability of and also ships genuine fat-tailed sheep tail fat.

If you have a local halal butcher, they may be able to source it for you – if you can find it, use it! For the rest of us, I recommend instead using fatty lamb belly and then grinding it yourself – you can buy it here.

Urfa biber chili flakes  from Turkey are an integral part of the flavor profile – you can buy them here. Genuine Capia peppers from Eastern Europe are also a needed flavor in this recipe – thankfully, you can purchase them from here. Genuine Turkish sumac (not the poison kind, I assure you!) adds a sour component and may be bought here. Smoked paprika is here.

This is a truly delectable dish, Citizens – it will be a huge hit for you and yours, I promise!