Citizens! This is a recipe that I was seriously debating never to share – it is the ultimate chicken soup, rich and redolent of the essence of not one, not two, but *3* different kinds of poultry to give it unmatched flavor! Everyone who has tried it has swooned, and after much soul-searching, I have decided the time is at last right to unveil this recipe of divine inspiration! 🙂

Since I am something of a Chinese cuisine scholar, I wanted to create a chicken soup with superb taste fusing Jewish and Chinese elements to create the ultimate soup! Jewish “bubbes” (grandmothers in Yiddish) traditionally made their version of the recipe by boiling the chicken in chicken stock, not water! This made it a “double fowler” stock, with the essence of two birds – but I went one better!

My chicken soup recipe uses a chicken plus two secret birds from the Chinese repertoire – a duck (which adds more taste than you can possibly imagine) and a Chinese Black Chicken, called a Silkie. A Silkie can be easily purchased at any Chinese grocery store such as the “Ranch 99” chain of markets, as can the duck. Should you prefer, just use two extra chickens in place of these birds if you are so inclined – but the taste result using them is simply unmatched in my triple-fowler extravaganza!

Silkie’s were always used for chicken soups that were medicinal – used to heal someone from a severe illness. The skin, meat and bones of the Silkie are bluish-black, but fear not Citizens – you will not be using the meat from the Silkie in the final soup, just the shredded chicken and duck. Using a Silkie will also not turn the stock black or dark – it makes a normal-colored broth, never fear!

All Silkies have black or bluish skin, bones and grayish-black meat; their Chinese language name is wu gu ji (烏骨雞), meaning ‘black-boned chicken’. Melanism which extends beyond the skin into an animal’s connective tissue is a rare trait, and in chickens it is caused by fibromelanosis, which is a rare mutation believed to have begun in Asia. The Silkie and several other breeds descended from Asian stock possess the mutation. Disregarding color, the breed does not generally produce as much as the more common meat breeds of chicken. 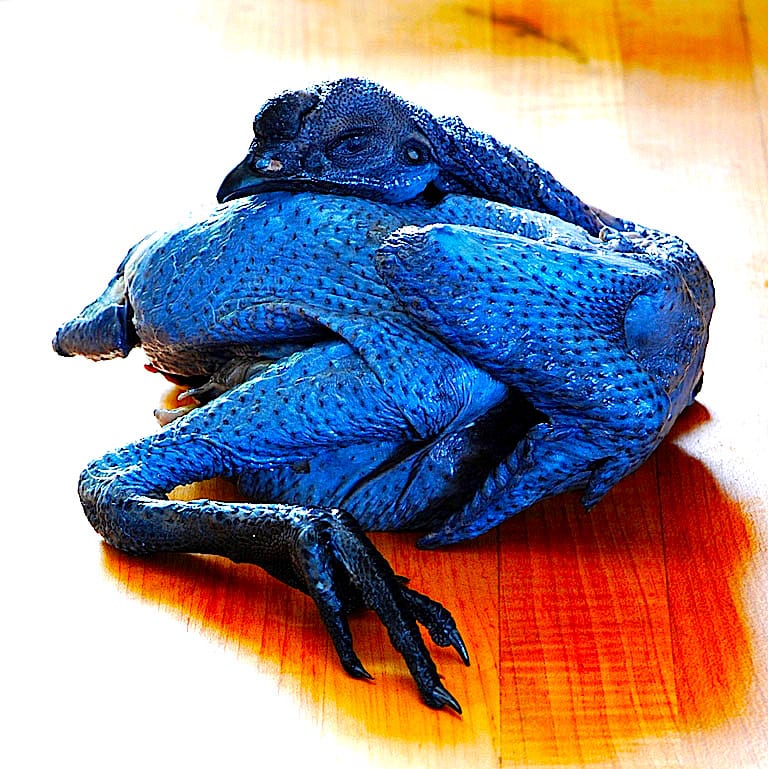 As early as the 7th century, traditional Chinese medicine has held that chicken soup made with Silkie meat is a curative food. The usual methods of cooking include using Silkie to make broth, braising, and in curries. Traditional Chinese soup made with Silkie also uses ingredients such as wolfberries, Dioscorea polystachya (mountain yam), orange peel, and fresh ginger. A few fusion restaurants in metropolitan areas of the West have also cooked it as a part of traditional American or French cuisine, such as in confit.

It goes without saying that you should try and obtain whole birds – including the very important feet, which add body to the soup (as do the wings). You don’t want to add the feet of the duck and if you can’t obtain the chicken feet, don’t sweat it. Just know that if you CAN (and all Chinese grocers sell them that way), you’re in for the best of all possible soups!

Now, as to the matzo balls – Jews fall into two camps. The poor misguided souls who prefer fluffy matzo balls and those possessed of unmatched good taste who prefer “sinkers”, which are more dense. You know what camp I fall into, but if you prefer fluffy – by all means go that route. I won’t hold it against you. 😉

Citizens – this is truly the ultimate chicken soup to get your Jewish groove on – or your Chinese groove, or simply when you just need a bowl of the most healing and delicious chicken soup this side of heaven. You will NOT be disappointed!

TFD currently has a total of 1,356 posts and 1,141,745 words written since December of 2014! Add your voice to My 50,000+ dedicated readers, comment on My recipes and thus become an active member of TFD Nation! Looking for a particular recipe? Search for it in the box above or via the category tags below - there are THOUSANDS of the finest in world and historic recipes here!