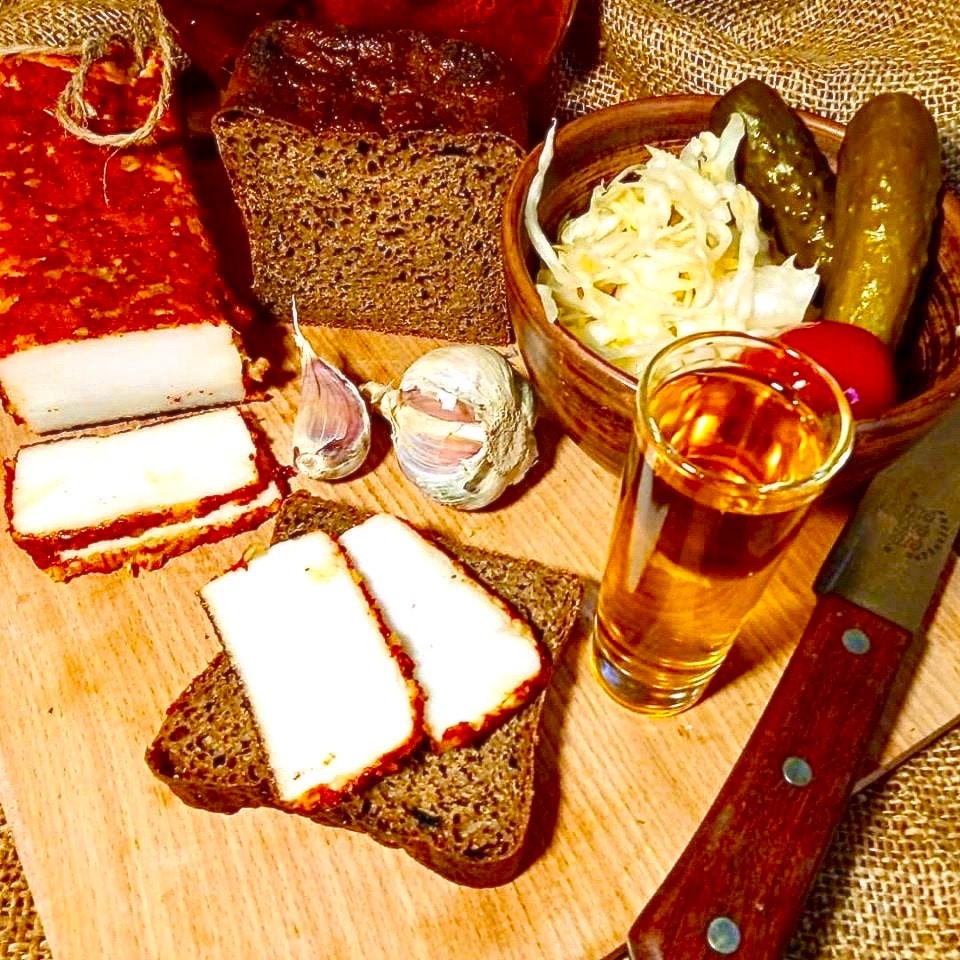 Citizens, the appreciation of fat in all its myriad forms is one of the documented super-powers of the Sublime One – the highly-saturated Glory who ALONE is TFD! – and I wish to share my love for salo, a delectable cured fat straight from Transcarpathia! I first tasted the classic Ukrainian version in Odessa, Ukraine and fell instantly in love – it spoke to me in a silken tongue of flavorsome fat but is quite different from the Transcarpathian version!

If you’re unfamiliar with the Transcarpathian region, it is the Carpathian mountain portions of Romania and Ukraine that also includes a large number of Hungarian-speaking natives – it’s also the legendary home of Vlad Dracul, aka Dracula (which some cheekily say explains the reason for the huge amount of garlic in the region’s cuisine).

While Ukraine, Romania and Hungary may have their political differences concerning the region, everyone who lives there can agree on one thing – Salo (pork fat) is where it’s at and I will teach you the way to properly make it the Transcarpathian way, which is unique from the rest of Ukraine with its use of the classic Hungarian spice of paprika!

Interestingly, Transcarpathia does make its own paprika, as noted here – something that escaped even the gastronomic omniscience of TFD until today!

I found an absolutely encyclopædic description of salo at proudofukraine.com – I reprint most if it here with some corrections to their English and edited for clarity:

Salo is a white pork fat known as a national Ukrainian dish. Salo has little or no meat; it is not rendered as lard and is not necessarily cured as bacon. In Ukraine and many other countries salo and its variations are considered a main dish of the national cuisine.

In the old days due to its high nutrition value, salo was an important element of people’s daily diet (100 g of pig fat amounts to 800 calories). Also, salted or smoked salo can be preserved for a long time without refrigeration. Today, due to the spread of healthy nutrition, it has become a chaser or a starter on a national festive table rather than a main course.

In Ukrainian cuisine, salo plays a very important role. It is as popular as other traditional Ukrainian dishes – borscht, varenyky, golubtsi, galushky. Ukrainian salo is a unique chaser for alcohol because it is served in slices with bread, garlic and pickles, all of which help to prevent a hangover. It wasn’t invented in Ukraine – it was first made in the territory of Italy about 3000 years ago. It was used there as a cheap high-calorie meal for slaves (TFD note: today, it survives as lardo).

The dish has been eaten in Ukraine since the 16th century. Ukraine is a country with well-developed agriculture, and pigs are easy animals to keep. The farmers sold the meat, but the salo they kept for themselves because it was easier to store and it had more calories.

As a dish, it became popular because Ukrainian people were poor and could afford meat only on holidays, while salted salo was affordable the whole year. Peasants took bread with salo as the lunch during field work. If you visit Ukraine today and want to taste the dish, I recommend visiting the Modern Art Museum “Salo” in the Western Ukrainian city of Lviv. It is a museum-restaurant where you can try more than 30 varieties of the dish.

Salo is very popular not only in Ukraine, but also in the neighboring countries of Belarus and Russia. However, it is still a stereotypical attribute of Ukrainians, analogous to spaghetti for the Italians and burgers for Americans.

There is a difference between Russian and Ukrainian salo – the Russian version contains bits of meat, while traditional Ukrainian salo consists of only a white layer of fat. Belarusians and Russians agree that the best salo is made in Ukraine, especially in its western region. After the Soviet Union break-up in the 90’s, Ukrainians smuggled salo into Russia and sold it at the railway stations in Moscow.

Salo plays an important role in Ukrainian culture. In Ukrainian folklore there are a lot of jokes, songs, and poems about salo. It’s hard to find a post-Soviet person who isn’t able to recite at least two or three jokes about Ukrainians and their love for salo.

For example, here is one of the classic jokes:

In Ukraine there is an annual championship “With Love to Salo” held in Lutsk (Volyn oblast, Western Ukraine). Salo lovers compete in eating salo and in cooking salo dishes (for example, large salo sandwiches called “salburgers”).

Ukrainians eat salo with borscht, fried potatoes, and always with black bread. Salo can be used as an ingredient for many dishes. For example, minced salo mixed with garlic and spices in a blender is often used as a spread for sandwiches. A mixture of minced salo and minced fried liver can be used as a stuffing for varenyky. Salo is often fried. Small pieces of fried salo are called “shkvarki”. Ukrainians add these cracklings to borsht or fried potatoes.

There are three methods for cooking salo:

Dry – using just salt and spices. The easiest and the quickest method. It will be ready to serve within 2 weeks, but storage shouldn’t be long – only 4-5 weeks.

Wet – using pickle-water. More time-consuming method, but the recipe made like this can be stored for longer.

Hot – the fatback is boiled, then it is seasoned with spices and cooled in a fridge. It can be stored for 6 months.

Transcarpathian salo is seasoned – unsurprisingly – with local hot parprika, and lots of it. I’ve simulated the flavor of it with ½ sweet paprika and ½ smoked chili flakes – the smoked flavor is atypical for this dish, but I think it works splendidly. Here is my source for the proper smoked chili – if you want the classic flavor profile, use a non-smoked, fairly mild chili flake.

Needless to say, if you are going to make a dish made 99.9% from fat, it had better be THE BEST YOU CAN GET! You should ONLY use pure, raw fatback – ideally from a Mangalitsa pig that is native to the region which is justly renowned for its fat!

Thankfully, you can easily buy it here in the States – this is my source. Always serve this with dark rye bread, Russian pickled fruits and vegetables (there are several recipes on the blog for them) and with some strong alcohol – I prefer honey pepper Horilka from Ukraine, buy it here.

This is one of the easiest ‘cured’ pork products you can make – there is no messing around with curing salt, etc. – and unlike lardo, it only takes a week or so to make instead of nearly a year! Of the 3 methods, I prefer the classic ‘dry’ method and that is the recipe I am providing you with today. This is an extremely rich dish, Citizens: just slice it thin, eat it occasionally and live la vida loca! 😀