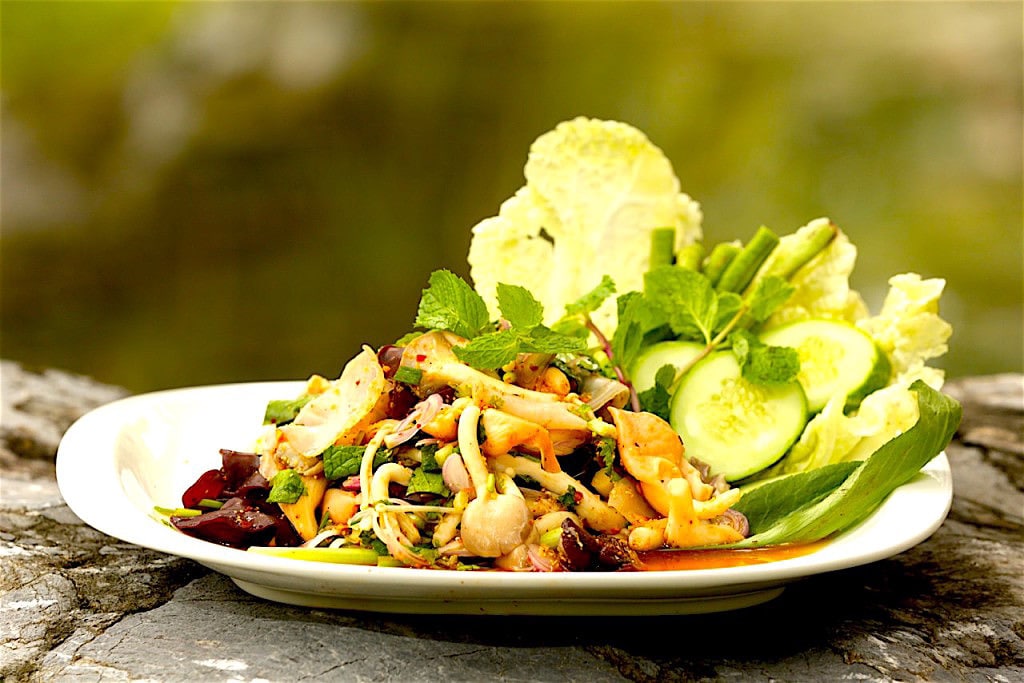 Citizens, TFD is a dedicated carnivore, with only occasional forays into the green realm of the vegetal. This is one of those rare journeys – a Thai mushroom salad that is both delicious and satisfying to my palate by combining powerful flavors with mushrooms possessing a variety of textures for a toothsome and savory result.

Most of the popular dishes here are either Thai in origin, or introduced by immigrants from China. Interestingly, mushrooms form a major ingredient in many of both categories.

Thailand abounds in cultivated mushrooms, and at least four kinds are commonly available in fresh markets and supermarkets. What’s more, during the rainy season, foragers flock to the forests to gather a wide variety of wild ones.

When asked why they set fire to the forest undergrowth in the dry season, one of the reasons often given by villagers is to facilitate access to them for picking mushrooms as soon as the rains arrive.

Certainly, such fungi are easier to spot after the forest litter and dry shrubs have been burnt to ashes. For many villagers selling them yields a substantial addition to their income from agriculture.

They may trade them in local markets, or build temporary bamboo shelters along a nearby main road and sell them to passing motorists. From June until September, Highway 108 between San Patong and Chomthong, and Highway 11 south of Lamphun are stretches where you can expect to find such stalls.

Most of the mushrooms consumed in Thailand, however, belong to the cultivated types and are available throughout the year. They are both tasty and nutritious, many being a rich source of protein.

They can be cooked in curries or stirred in a wok together with a choice of vegetables and shrimps or minced pork or chicken. They are also common ingredients in many spicy Thai salads.

The Straw Mushroom (Volvariella volvacea) is probably Thailand’s best-known type and one of the tastiest. Both its English and Thai name (het fang / เห็ดฟาง) refer to straw as the medium on which it is usually grown. It somewhat resembles the champignon, however, the cap of the young specimens is not flattened but characteristically dome-shaped, and has a light greyish or yellowish tint.

The immature stages of both are generally preferred to the fully developed ones. The straw mushroom is sweeter and most people find its taste superior to the champignon’s. Stirred with sweet baby corn and shrimps or chopped chicken, it makes the delicious rice-based dish phat khao phot het fang / ผัดข้าวโพดเห็ดฟาง.

It is also a major ingredient in tom yam kung / ต้มยำกุ้ง, a spicy, sour curry with shrimp, considered one of the best examples of ‘classic’ Thai cuisine.

I believe you will find this Thai mushroom dish as worthy of trying as I do…even if it is vegetarian. 😉 Consider pairing it with some Thai cucumber pickles if you’re anxious to stay on the ‘green side’.