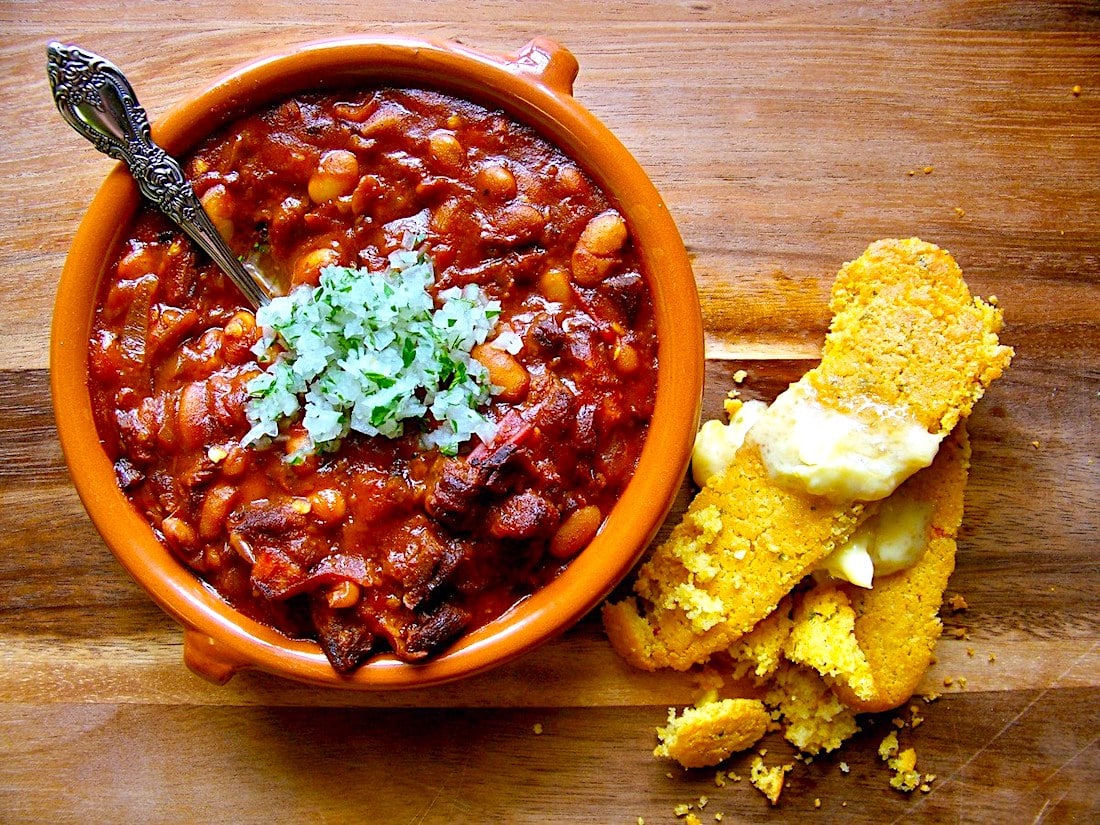 Citizens! The 4th of July is nearly upon us, and there are few recipes I can think of that better define the essence of the holiday more than delicious Texas-style BBQ beans!

The flavor in this most bedrock of Texas sides is beyond compare – truly a coordinated symphony of explosive and luminous tastes worthy of Independence Day (whether you’re celebrating independence from England in 1776 (the 13 original colonies) or Mexico (itself a newly-independent country that Texas broke away from in 1836).

This is a most alliterative (and delicious) recipe: with 5 B’s in it, it is my “B5” recipe (named after one of my favorite TV shows of all time – Babylon 5)! If you’ve never watched it, you’re in luck, as it’s available via streaming on Amazon – take my counsel and go forth to watch it, you’ll thank me! The first few episodes in Season 1 suffer from growing pains – bear with it and after you’re past them, it’s a non-stop roller coaster ride of amazing writing! 🙂

You will assuredly find this side dish in any Texas BBQ joint, but there is no single definitive recipe for it – versions vary dramatically across different regions of the state. The best always incorporate some chopped smoked brisket – I’m very fond of the brisket made in Lockhart, TX at Black’s, but Salt Lick also makes a fine product (and it can be shipped nationwide!). Just heat up the brisket, chop up the needed amount for the beans and off you go!

As noted in this great (excerpted) article from NPR:

Side dishes are pretty standard. They include beans, coleslaw, potato salad and Texas toast, a thick slice of toasted white bread. Dessert is usually pecan or lemon chess pie, though I often make a Texas sheet cake — essentially a huge brownie.

There is more than one kind of Texas barbecue, however — a diversity that developed over time. In the beginning, there was open-pit barbecue — a hole in the ground with hot coals, over which a variety of meats were cooked on a spit. Think old cowboy movies.

From that evolved four different styles of Texas barbecue, according to Robb Walsh, a Texas journalist and barbecue authority. The varieties are cowboy, meat market, East Texas and Mexican barbacoa, he writes in the Houston Press.

“Each has its own style, and each is associated with a major immigrant group,” he writes. “The Central Texas meat markets were owned by Germans and Czechs. The West Texas cowboys were mostly Anglos. And the East Texas style is associated with Southern blacks. The barbacoa tradition began in cattle ranches along the border. …”

We lived in central Texas and so learned a combination cowboy-meat market barbecue. Many of the state’s most famous barbecue joints began as butcher shops run by German or Czech immigrants. They built smokers in which they smoked sausages made from meat scraps — hence the inclusion of sausages in Texas barbecue.

Barbecue culture is so strong in Texas, there is even an Emmy-nominated documentary about it, narrated by the late former governor Ann Richards. It includes commentary by newsman and Texan Dan Rather, who says, “If you want to be marked as an outsider for life, you just come to Texas and say ‘I can’t stand barbecue.’ “

My version of Texas BBQ beans is redolent with meats – bacon and brisket, which combined together could make a boiled baseball mitt become the food of the Gods. The spicing is typical of TFD – complex, multi-layered and perfection incarnate.

I do call for the classic Pinto bean, of course – this is my preferred brand. I also must insist you use Mexican oregano – it is very different from the Mediterranean version! You can buy it here.

As this is a Texan recipe, you must of course use only Texas’s own soft drink as a sweetener – Dr. Pepper! Get it with cane sugar if possible – buy it here. My secret ingredient in these beans is the use of a bit of Jalapeño jelly – it adds both sweet and heat and complements the recipe to perfection – you can buy it here.

I call this a “Border Town” recipe as it uses both Mexican oregano and epazote – the classic bean herb used over the Rio Grande border for both flavor and reducing flatulence. You can buy it here.

I wish all of the American members of TFD Nation a happy Independence Day – and I hope in some small way, my recipe will make your holiday get-together with friends and family all the more festive!