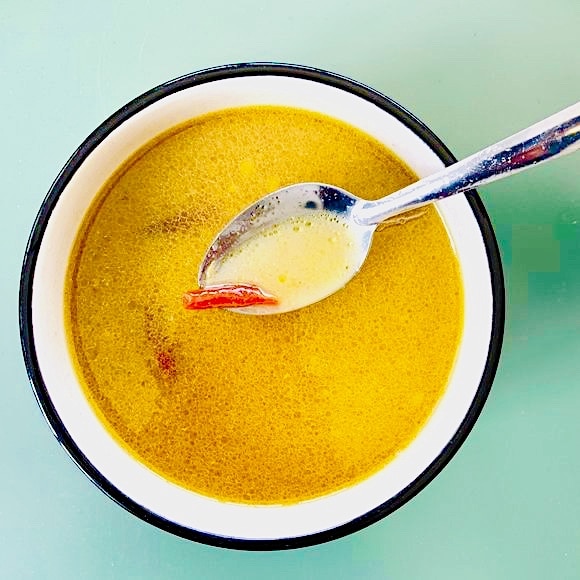 Citizens! There can be no doubt clouding your perception of the glory of the almighty TFD – and know that my relationship with coincidence and fate is the true stuff of LEGEND!

This must be rectified immediately and with purpose, forged into a Jovian thunderbolt of deliciousness set to strike your palate NOW.

Today, I received an email from my favorite gastronomic website – I speak of Gastro Obscura and if you are not subscribing to it – by all means, do so with haste! You’ll thank me – it’s a tremendous resource and great writing to boot!

Their latest recipe is for a dish I’d never heard of – a hyper-local regional dish so rare in its home state of Tennessee that even most locals aren’t aware of it outside of one small town.

I speak of “Doodle Soup” – and don’t turn your nose up at this simple recipe, it is (wait for it)…

Doodle soup is a broth that’s made from the drippings of roasted chicken or game mixed with salt, vinegar, cayenne pepper, water, sugar and flour. Typically, it is eaten as a soup with crackers or some type of bread or poured back over the roasted meat as a flavoring.

Today, there are many variations of the soup but the strong taste of vinegar remains a key characteristic of doodle soup.

To get a sense of the history of this soup (which only seems to date back to the mid 1950’s) You can watch this video to learn more about the soup and the town that birthed it.

The primary gripe people tend to have around this dish is that since the fat isn’t skimmed off the broth, it can be greasy. I’ve modified the recipe to skim most of the fat – but not all of it. Feel free to leave all the fat in there for the original experience.

I’ve also added some herbs and vegetables to the broth to increase the flavor and I use cornstarch instead of flour to thicken the soup.

Most recipes call for chicken or game as the meat – I’ve combined both by specifying some venison shanks for the broth – you can also use beef shanks if you so prefer. You can buy the shanks already cut up here, if you aren’t a hunter or lack access to a butcher who stocks venison.

I also amp up the flavor of the broth with some chicken demi-glacé – yes, it’s an “uptown” sort of change, but it really does make an enormous impact on the final flavor. You can buy my preferred brand here.

Lastly, there is a “holy war” between locals as to whether this dish should be served with crackers or biscuits – I fall firmly into the “biscuit camp”.

Don’t be prejudiced against the rural charm of this recipe, Citizens! You’ll truly be missing out if you are.

Do NOT follow this link or you will be banned from the site! Click here to see our Privacy Policies, Citizen!
186shares
wpDiscuz
0
0
Would love your thoughts, please comment.x
()
x
| Reply