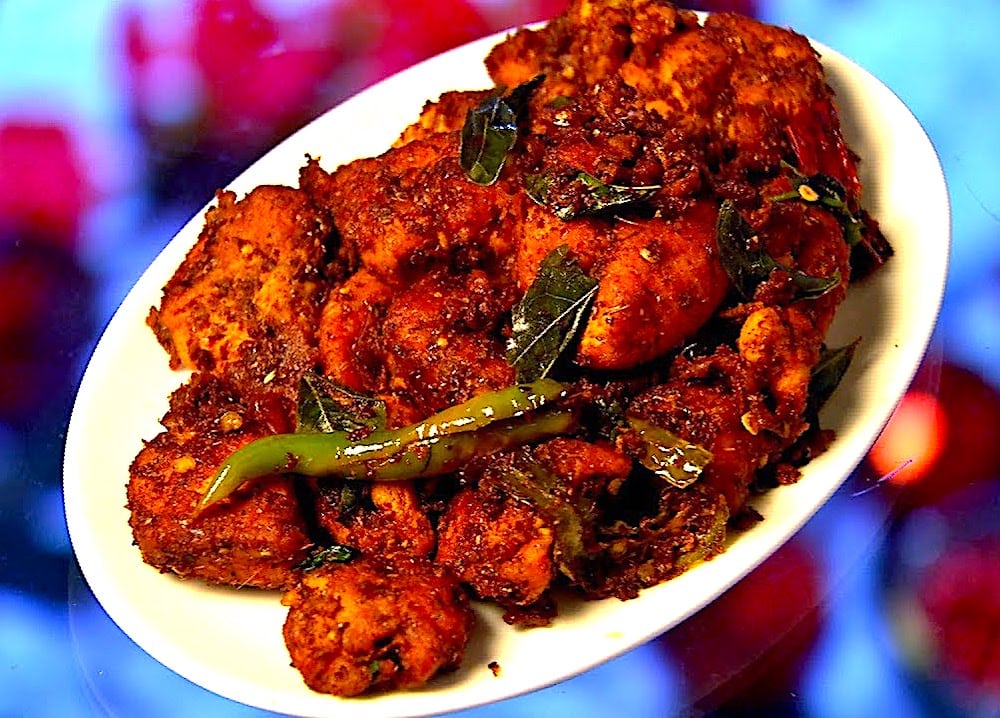 Citizens, the Maharajah of Magnificent, the Sultan of Spice – YOUR TFD! – will rarely break a sweat from even the hottest of dishes!  As it happens, one of the hottest cuisines on the planet hails – unsurprisingly – from India. Specifically, from the Telugu-speaking states of Andhra Pradesh and Telangana, which were split into two back in 2014. Mercifully, today’s dish is actually one of the most mild examples of this cuisine.

That linked BBC article from 2014 notes:

India’s southern state of Andhra Pradesh has formally split in two, with its northern area carved out to create a new state called Telangana.

The move followed prolonged protests by residents of Telangana, who felt the region had long been neglected.

With a population of 35 million, it comprises 10 former districts of Andhra Pradesh and the city of Hyderabad. K Chandrasekhar Rao, of the Telangana Rashtra Samithi party (TRS), which for 14 years spearheaded the movement for separation and will form the new state’s first government, has been sworn in as the chief minister for Telangana.

Hyderabad, which forms the joint capital of the two states for the next 10 years, was covered with pink balloons, banners and flags to mark Telangana’s statehood, says BBC Hindi’s Zubair Ahmed. Pink is the colour of the TRS.

Both states speak Telugu and are in fact both populated by the Telugu people.

Telugu cuisine is a cuisine of South India native to the Telugu from the states of Andhra Pradesh and Telangana. Generally known for its tangy, hot and spicy taste, the cooking is very diverse due to the vast spread of the people and varied topological regions.

Andhra Pradesh state is the leading producer of red chili, and rice in India and is known for the liberal use of spices — making the food one of the richest and spiciest in the world. Vegetarian cuisine features prominently on the menus, although the coastal areas are also known for their meat and seafood dishes. Pappu, tomato, gongura, and tamarind are largely used for cooking curries. Spicy and hot varieties of pickles also form an important part of Telugu cuisine.

Andhra Chicken Fry is an authentic restaurant-style, non-vegetarian recipe quite indicative of the carnivorous side of Telugu Cuisine. Telugu cuisine in general is a delicious amalgamation of spice, vegetables, meat and legumes to bring you a truly spectacular Indian feast! It’s a pity so few Americans are familiar with it, but my sincere hope is that now that I am sharing some of the region’s best recipes, this will quickly change for the better! 😀

In Andhra, this dish is very popularly known as Kodi Vepudu – ‘kodi’ means chicken and ‘vepudu’ means fry. While most Andhra recipes are usually quite spicy, (as previously noted).

Traditionally, the ground onion in this recipe would be cooked separate from the chicken and before the sliced onions go in. However, I have learned that ground onion is a terrific meat tenderizer (it is used as such in many Silk Road countries) and I have decided instead to add it to the chicken marinade to ensure supreme tenderness.

This is not a complicated dish to make – but it does require a few specific ingredients unique to the Indian kitchen. Kashmiri chili powder may be purchased here, dessicated coconut powder can be bought here, fresh curry leaves from here.

Citizens, this is a delicious introduction to the delicious cuisine of the Telugu, I hope you decide to give it a try! It is especially delicious served with pickles from the region. 😀

Do NOT follow this link or you will be banned from the site! Click here to see our Privacy Policies, Citizen!
101shares
wpDiscuz
0
0
Would love your thoughts, please comment.x
()
x
| Reply