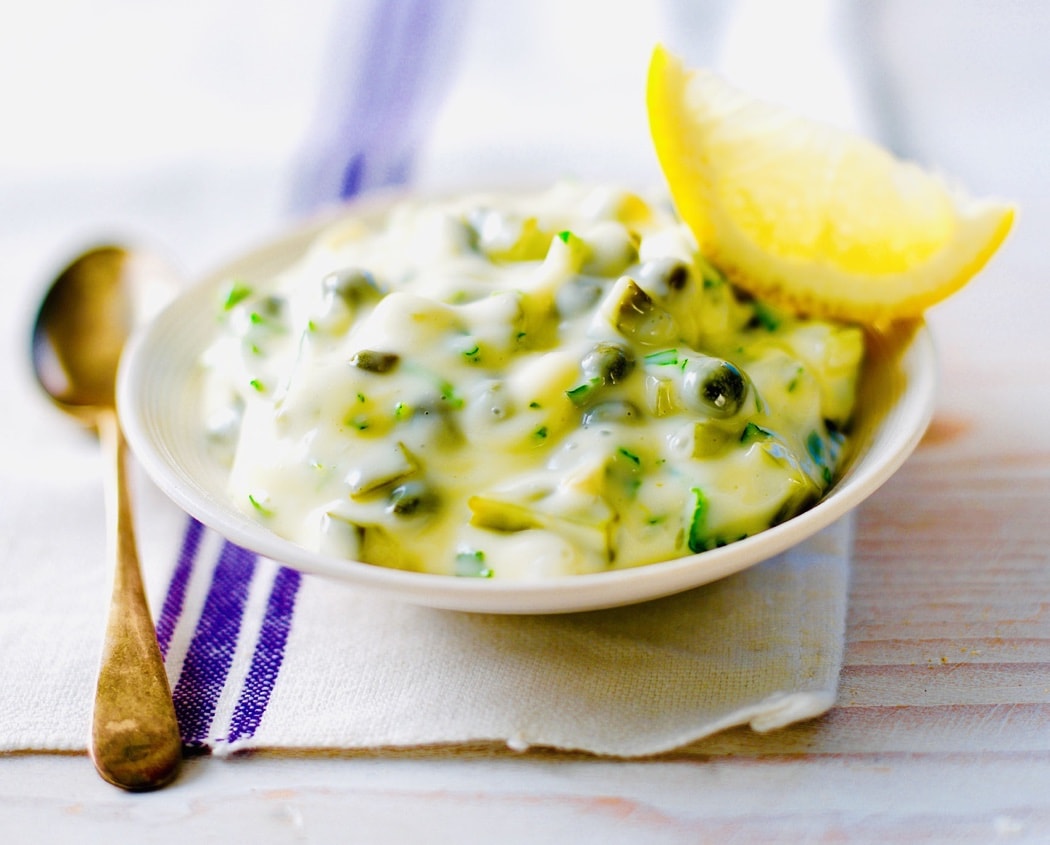 Citizens, the Condiment King (yes, that’s a super-geeky reference to the most ludicrous comic book villain of all time!), YOUR TFD!, has descended from the summit of Mt. Erebus (the location of his hidden lair in Antarctica) to gift you with the sacred tablets of culinary Law! Inscribed upon them, in hoary and ancient runes from the Time before Time, is this – the recipe for that most noble of condiments: TARTAR SAUCE!

Don’t turn up your nose, Citizen – tartar sauce elevates the most humble fish fry into something worthy of song and story – and today, I share my version of it with the members of TFD Nation!

Tartar sauce (in the UK, New Zealand and Australia, tartare sauce) is a mayonnaise or aioli-based sauce, typically of a rough consistency. It is most often used as a condiment with seafood dishes.

In the UK, recipes typically add to the base capers, gherkins, lemon juice, and dill. US recipes may include chopped pickles or prepared green sweet relish, capers, onions (or chives), and fresh parsley.

Chopped hard-boiled eggs or olives are sometimes added, as may be Dijon mustard and cocktail onions. Paul Bocuse describes sauce tartare explicitly as a sauce remoulade, in which the characterizing anchovy purée is to be substituted by some hot Dijon mustard.

The sauce and its name have been found in cookbooks since the 19th century. The name derives from the French sauce tartare, named after the Tatars (Ancient spelling in French of the ethnic group: Tartare) from the Eurasian Steppe, who once occupied Ukraine and parts of Russia.

Although it is unlikely that the Tatars ever made or consumed Tartar sauce, the actual origin of the sauce is indeed found East of France, which may have inspired the confusing name. In Turkey and the Levant, a condiment known as tarator has traditionally been used as a condiment to fried sea food.

Turkish and Levantine tarator is usually a sauce based on tahini, not mayonnaise or aioli, but in regard to being a creamy, tangy accompaniment to fried fish and/or seafood, it is extremely similar to tartar sauce.

Hellman’s introduced its commercial Tartar Sauce in jars in the 1920s. This was a natural move for Hellman’s, as Tartar Sauce is based on mayonnaise, though more sophisticated versions now use crème fraîche or fromage-frais instead of the mayonnaise.

As eruditely noted in frenchcountryfood.com:

The origin of the word mayonnaise is controversial, the first meaning of the word appearing in 1806. It could come from Mahon (Mao), the capital of Minorca in the Balearic Islands, Spain, occupied by the British and conquered by the Marechal de Richelieu in 1756. The Marechal had presented to his cook this sauce called “the mahonnaise” made with only two ingredients at his disposal: egg and oil. Nevertheless, the sauce began to be described shortly before this event.

Another hypothesis is based, after Careme, a derivative of magnonaise (verb magner or handling) or, according to Prosper Montagne, of moyennaise (or moyeunaise), moyeu which means egg yolk in old French. It has also been proposed to relate to the word to the old verb mailler meaning ” to beat”.

Joseph Fabre says, for its part, that mayonnaise is an alteration of the word magnonnaise derived from Magnon (Lot-et-Garonne), one cook Magnon was first popularized in the South, he notes that the sauce was named either mahonnaise, Bayonnaise and mayonnaise.

The French city of Bayonne (sauce “in Bayonne”) could also give its name to this type of sauce by orthographic transformation.

This explanation would seem to be confirmed by the fact that there is no written record of the sauce to “mayonnaise” before the beginning of the nineteenth century, so long after the capture of the city of Mahón.

A final hypothesis, more controversial, and issued by the linguist and historian Nicolas Lepreux suggests that mayonnaise come from the Mayenne region, and the “e” will be changed into “o” over time: the apocryphal story said that the Duke of Mayenne would have eaten, at the eve of the battle of Arques, too much chicken seasoned with a sauce, remarkable, so the next day he fell from his horse and lost the battle.

So, let’s make one thing crystalline-clear: TFD prefers His tartar sauce the original way, with mayo – dissenters shall be immediately purged from the ranks of TFD Nation! The truth is, some things are best kept close to their humble roots and this recipe is one of them.

That said, I do elevate my tartar sauce with classic French seasonings as well as a goodly hit of spice from the New World via the use of some Old Bay seasoning and some Tabasco for a heated finish on the palate.

Allow this delicious sauce to grace your next fish fry or seafood dinner – you will indeed thank me, Citizens!