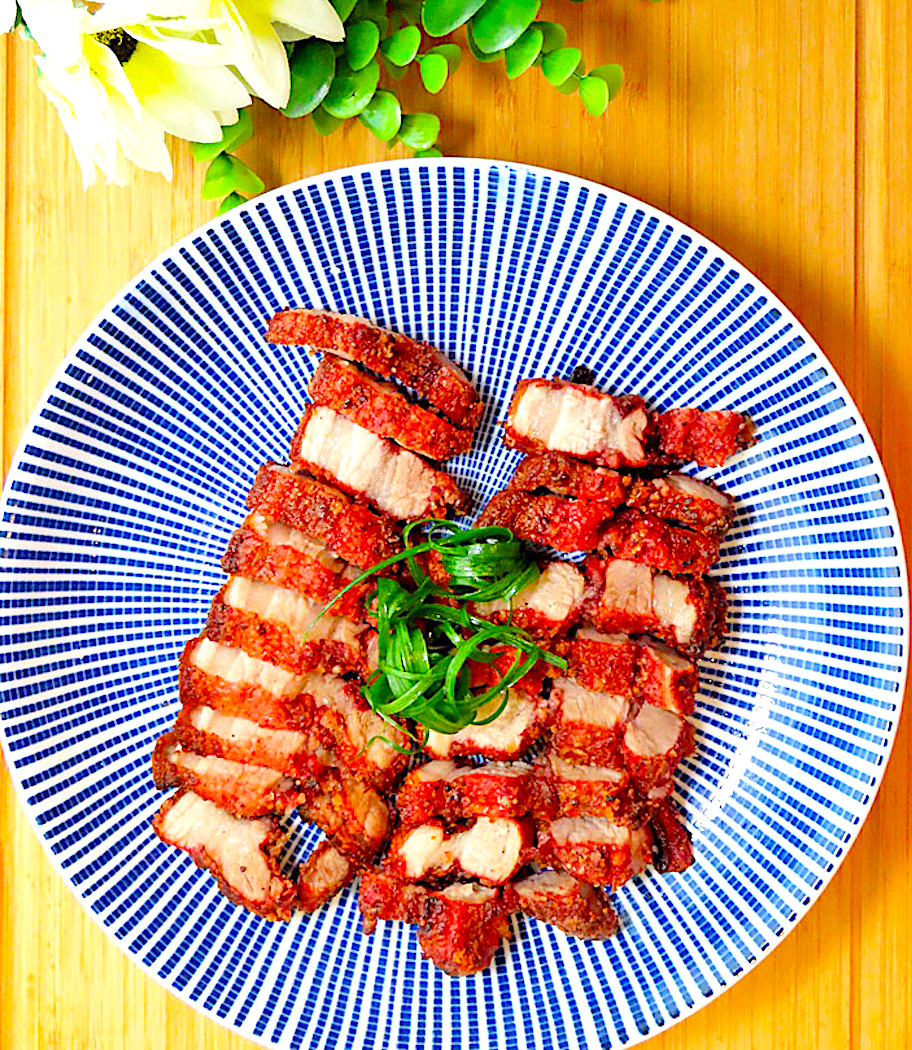 Citizens, today is indeed a red-letter day in the history of TFD Nation, as I am going to be sharing one of my favorite street foods with you from the fantastic country of Taiwan, one of Asia’s true gastronomic melting pots and home to some truly delectable dining indeed!

Why do I say a red-letter day? Ah, therein lies the tale – so sit back and drink in the glorious knowledge possessed by the Mufti of Magnificence, the Potentate of Pleasure who ALONE is TFD! This delectable fried pork belly is simple to make, yet profound in flavor thanks to some unique ingredients that include one which has literally saved the lives of hundreds of millions of people – including mine! More on this shortly.

The Taiwanese have a truly unique eating culture, as outlined in this fascinating excerpted article from eater.com:

“Taiwanese food history is as murky as Taiwanese politics,” says Katy Hui-wen Hung, author of 2018’s A Culinary History of Taipei. Indeed, it’s hard to talk food without getting political around here. Many of the dishes we love today wouldn’t exist without successive eras of global trade, colonialism, and hegemony.

Nowadays, much of the international community has ghosted Taiwan, an oft-overlooked island of in-between-ness, which has no official representation in the United Nations, and is subject to the dueling whims of the American and Chinese governments.

How can you claim a national dish when most of the world doesn’t even acknowledge you as a country? (Taiwan forges ahead anyway, hailing beef noodle soup as its official cure-all.) Taiwan is at a political crossroads, one that makes for a unique cuisine that’s rich and complex, steeped in historical lore and brimming with political landmines.

In short: Talking about food here is complicated. But enjoying Taiwanese food is quite the opposite. Sugary, aggressively herbal, and deeply umami flavors permeate the local cuisine in a visceral way, a sensation that’s only amplified in Taipei by its setting — often a bustling street corner, a jam-packed night market, or a steamy hot pot palace.

This is the essence of re nao (熱鬧), the “hot and noisy” spirit that makes the island breathe. It’s the in-your-face flashing lights, powerful smells of stinky tofu, and jittery, larger-than-life feeling that comes with being elbow-to-elbow inside a large, pulsating mass in one of Asia’s densest urban centers.

The food we think of as distinctly Taiwanese is in fact a hodgepodge. Local indigenous flavors and waves of outside culinary influences have all coalesced into the “salty-sweet” trademark of modern Taiwanese cuisine in which handfuls of basil, garlic, and green onion supercharge nearly every dish.

This way of life is, for the most part, a thing of the past, but half a million Taiwanese aborigines still populate the country, and their culinary influence endures via local ingredients like millet and mountain peppercorn known as maqaw; flavorful dishes like leaf-wrapped abai millet dumplings and salty maqaw-spiced sausages; and cooking techniques like salting and slow smoking.

Taiwanese cuisine also bears the marks of the Hakka people — an ethnic Han Chinese subgroup with ancestral roots in the Hakka-speaking provincial areas of Southern China that began settling on the island around the 17th century.

We can thank Chinese people from Fujian for the sweet, heady flavors that permeate dishes like minced pork on rice and gua bao, or pork belly buns — they came here first during the Qing Dynasty, and later, along with the mass arrival of mainlanders fleeing the Communists at the end of China’s civil war in the 1940s.

In between came five decades of Japanese colonization starting in the late 1800s, which brought bright, umami pickled vegetables, sweet-steamed mochi covered in sesame, and seafood dishes with an emphasis on seasonal ingredients. To this day, bento boxes and sushi bars can still be found on most every street corner in Taipei.

And not surprisingly, America too has left its indelible mark. While wheat products were already prevalent throughout Taiwan, the postwar USAID era — in which Americans brought tons and tons of wheat to the island — was when foods like wheat noodles, wheat flour-based buns, sweet breads, and dumplings became a national obsession, and the Taiwanese diet was forever changed.

This particular recipe bears all the hallmarks of Fujian province, where many of the mainland Chinese who fled after the Communists won were originally from – the use of the red rice powder is the giveaway. This particular item has a unique and storied history in Fujian province, and I personally owe my life to this particular food – the statin drugs that lower cholesterol were in fact derived from red yeast rice, just as Tamiflu is derived from star anise! It is a mainstay in both Taiwanese and Fujianese cuisine.

In addition to its culinary use, red yeast rice is also used in Chinese and Taiwanese herbology and traditional Chinese medicine. Its use has been documented as far back as the Tang Dynasty in China in 800 AD. Red yeast rice is described in the Chinese pharmacopoeia Ben Cao Gang Mu by Li Shizhen. Recommendations were to take it internally to invigorate the body, aid in digestion, and revitalize the blood.

A modern-era use as a dietary supplement developed in the late 1970s after researchers were isolating lovastatin from Aspergillus and monacolins from Monascus, respectively, the latter being the same fungus used to make red yeast rice.

Red yeast rice is produced by cultivating the mold species Monascus purpureus on rice for 3–6 days at room temperature. The rice grains turn bright red at the core and reddish purple on the outside. The fully cultured rice is then either sold as the dried grain, or cooked and pasteurized to be sold as a wet paste (known as hongzhao), or dried and pulverized to be sold as a fine powder.

Red yeast rice is used to color a wide variety of food products, including pickled tofu, red rice vinegar, char siu, Peking Duck, and Chinese pastries that require red food coloring. Historical records date its use as a coloring agent in Japan going back to ca. 300 BC.

There, it was called a “koji” in Japanese, meaning “grain or bean overgrown with a mold culture”. In China, documentation dates back to at least the first century AD. and it is also traditionally used in the production of several types of Chinese huangjiu (Shaoxing jiu), and Japanese sake (akaisake), imparting a reddish color to these wines.

Although used mainly for its color in cuisine, red yeast rice imparts a subtle but pleasant taste to food and is commonly used in the cuisine of the Fujian province of China. Red yeast rice (angkak in Filipino) is also used widely in the Philippines to traditionally color and preserve certain dishes like fermented shrimp (bagoong alamang), burong isda (fermented rice and fish), and balao-balao (fermented rice and shrimp).

In addition to its culinary use, red yeast rice is also used in Chinese herbology and traditional Chinese medicine. Medicinal use of red yeast rice is described in the Chinese pharmacopoeia Ben Cao Gang Mu compiled by Li Shizhen ca. 1590. Recommendations were to take it internally to invigorate the body, aid in digestion, and revitalize the blood. One reference provided the Li Shizgen health claims as a quotation “…the effect of promoting the circulation of blood and releasing stasis, invigorating the spleen and eliminating [in]digestion.”

So, you can see that it is a wise thing indeed to eat fatty fried pork belly with red rice, as it lowers the gigantic amount of cholesterol you are eating – the Chinese herbalists truly understood the subtleties of their craft, and it is also delicious to boot!

You can buy the sweet potato starch used to coat the fried  meat with a shatteringly-crisp crust here, and the red yeasted rice from here. If you decide you want to follow my lead and use some Fujianese hongzhao red rice wine paste, please do as it really adds to the savor! Sadly, it is very hard to find outside of Chinese or Taiwanese specialty grocers – at some point, I will share the recipe on how to make it at home for yourself as it isn’t very difficult. 🙂

Citizens, this is a delectable and easy Taiwanese dinner to enjoy – just remember you need to marinate the pork belly for 2 full days before you fry it up! If you want to complete the Taiwanese theme for the trifecta, close out the meal with these delicious and totally authentic Taiwanese pineapple cakes!