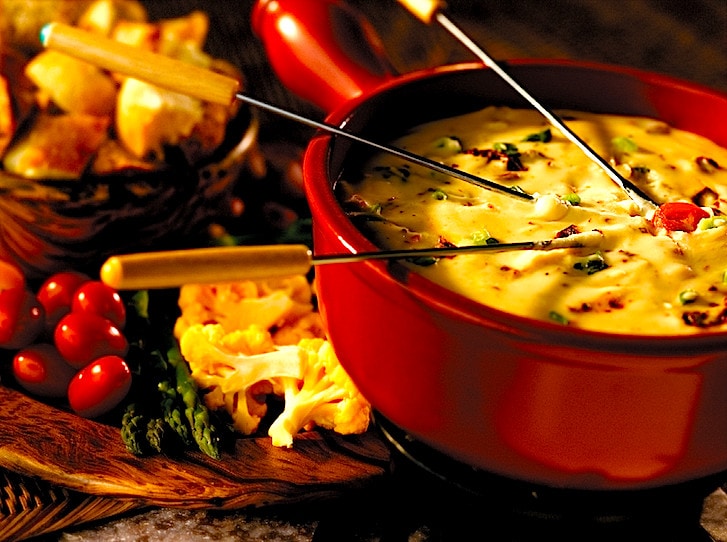 Fondue is a Swiss dish of melted cheese served in a communal pot (caquelon) over a portable stove (réchaud), and eaten by dipping long-stemmed forks with bread, vegetables and meat into the cheese. It was promoted as a Swiss national dish by the Swiss Cheese Union (Schweizerische Käseunion) in the 1930s as a way of increasing cheese consumption.

After World War II, the Swiss Cheese Union continued its marketing campaign, sending fondue sets to military regiments and event organizers across Switzerland – Fondue is now a symbol of Swiss unity. Fondue became insanely popular in North America in the 1960s. It seemed like everyone in the 60’s had a fondue set for parties – just watch Mad Men. 😉

Swiss cheese shops typically combine 2-3 different shredded cheeses to make their own proprietary fondue mixes. My version uses four of Switzerland’s greatest cheeses: Gruyere for its full cheesy flavor, Emmentaler for nuttiness, Raclette for texture and Tête de Moine or Appenzeller for sharpness, all in a specific ratio for optimum flavor. If you can get only one or two of these cheeses, don’t worry — just use whatever you can acquire and make your own house blend. It will still be delicious.

Traditional fondue always includes a shot or two of Kirsch, which is a cherry brandy – I highly recommend this custom. My delicious idiosyncrasy is to also include a bit of French thyme and herb liqueur – I find it adds a hint of alpine herbaceousness that really complements the cheese. Feel free to just use Kirsch if you prefer or are a traditionalist.

There are a number of specific customs and rituals around fondue eating that are observed by the Swiss – I excerpted these from the excellent “Hello Switzerland” site:

The Swiss tend to have non-negotiable opinions about what you should drink with fondue. A dry, acidic white wine is the standard accompaniment, or hot tea. Before you take your first sip, an important Swiss custom at any meal accompanied by wine (fondue or otherwise) is to clink glasses individually with each person at the table while looking them in the eye. Skipping someone or avoiding eye contact is considered rude, as is allowing your arms to intersect with someone else’s as you clink.

Bread dipping serves not only to convey the molten cheese from pot to mouth, it’s also an opportunity to stir the fondue regularly, thereby preventing it from separating and from sticking and burning. So with each dip you should plunge your bread-loaded fork all the way to the bottom of the pot and give a few good, vigorous stirs (some claim you should only stir in a figure 8). If a piece of bread should manage to escape from your fork, traditionally there are penalties for this, such as paying for the wine, kissing the person next to you, or completing a dare.

Le coup du milieu can be loosely translated as “shot (or hit) at the halfway point”. In the context of fondue, le coup du milieu is a small glass of spirits, usually kirsch, that is drunk about halfway through the meal and is supposed to aid digestion and stimulate a faltering appetite.

At the end of the meal, if you’ve been stirring away as you eat and the fondue has been kept at a very low bubble, you should find a crusty, golden, unburnt layer of cheese forming at the bottom of the pot, known as la religieuse (the nun). When all of the cheese has solidified into this cracker-like crust, extinguish the flame of the burner, use a knife to pry off the crust, lift it out and share it with your dining companions.

If you choose to use my thyme liqueur variation to this recipe, you can buy it from here.