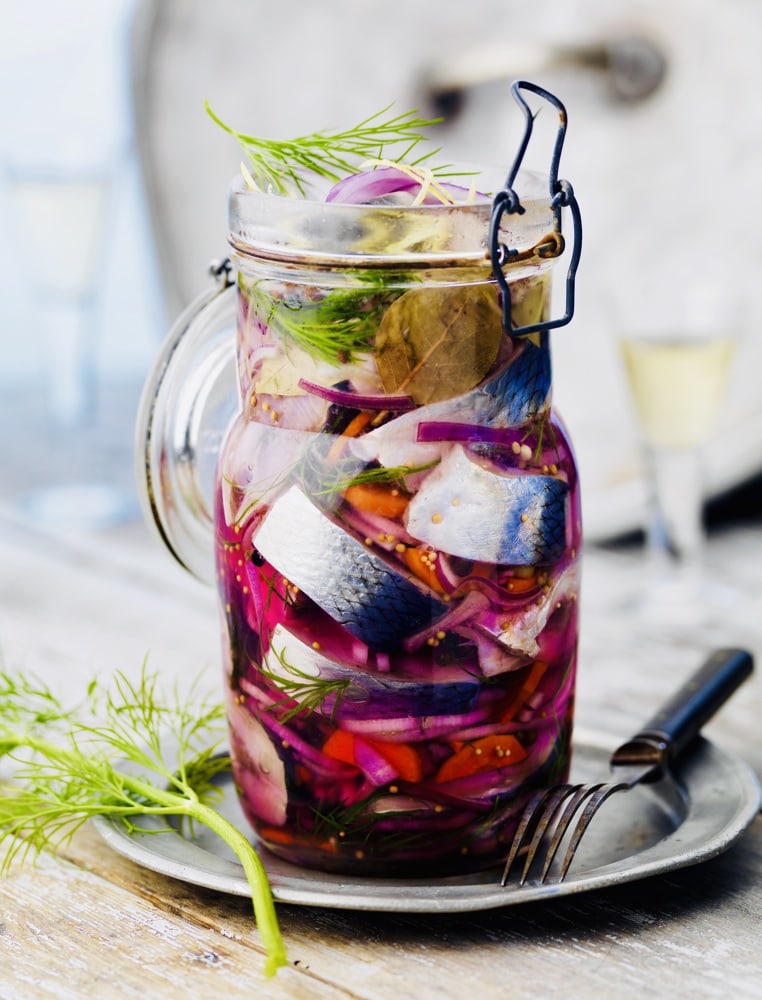 Citizens, your gastronomic compass is always guided to true North by the Magnetic Center of the Universe that is TFD – now let me point you to the northern reaches of Stockholm for this classic Swedish appetizer!

The unusual name derives from the fact that the appetizer should always be served in a glass container due to the beauty and color of the ingredients. It remains a centerpiece dish at any Scandinavian breakfast buffet and was supposedly created to show off the beautiful glassware of wealthy Swedes.

As noted in a wonderful New York Times article back in 2002 about the importance of herring to Scandinavian cuisine:

CAPT. BO CHRISTIANSON, the skipper of the Ron, a sturdy 115-foot trawler out of Fiskeback, a small port on Sweden’s west coast, warned me to be careful. The deck was covered with slippery silver scales. Then he lifted a hatch so I could see the night’s catch in the hold below: tens of thousands of beautiful fish, 8 to 10 inches long, with bluish backs, iridescent sides and gold eyes, kept fresh in a bath of refrigerated sea water.

Men like Captain Christianson have put to sea for centuries in search of herring; Scandinavian burial mounds dating from Neolithic times contain herring bones. Humble though it may be, and about as glamorous as a galosh, it is a fish that has shaped the political and social history of Europe like no other, with the possible exception of cod. The Hanseatic League, the medieval economic guild, came into being because the Germans had the salt that the Scandinavians coveted as a preservative for their herrings, and British and Dutch sea power was built on the back of the herring trade.

Herrings remain a staple in the diets of northern Europeans — not only the Scandinavians but also the Dutch, British, Germans and others.

The French grill them and serve them with mustard sauce. The British cool-smoke them, turning them into breakfast kippers. The Germans fillet them, cure them and wrap them around onions or pickles to make rollmops.

We Americans are not great herring-eaters, although we speak of misleading data as ”red herrings” (because smoked herrings were once used by poachers to throw dogs off a fox’s scent). And we sing of ”darling Clementine,” who shod her feet, size 9, with ”herring boxes without topses.”

Smoked, salted or pickled in countless ways, flavored with mustard or curry, tomatoes or dill, Scandinavian herrings have manifold virtues. They keep well, in some cases without refrigeration. They are packed with proteins and healthy oils. They are cheap, versatile and delectable.

At least to me they are, although I admit that every time I tell certain of my friends I’m bound for Sweden, they make sour faces and mutter, ”Yuk, herring.” I guess they think herrings are slimy or smelly or something. Well, they aren’t, not in the hands of a capable cook. Pickled herrings are plump, firm and rich, suffused with the sweetness of the sugar and the contrasting tartness of the vinegar in their brine. Believe me, they beat a shrimp cocktail every time for jolting a jaded palate.

Swedes don’t eat as much herring as they once did; there are too many options that didn’t exist a century ago. For many people, for example, cereal and yogurt have supplanted herring at breakfast. But herrings are still deeply rooted in national tradition.

”The first new potato of the year is still an excuse for eating herring,” said Ulrika Bengtsson, who once cooked for the Swedish consul general in New York and now runs a restaurant on the Upper East Side specializing in husmanskost, or Swedish home cooking. ”So is Easter, and so is midsummer, and the midwinter holiday that we call Lucia, and Christmas, of course.”

Herrings are, in fact, accorded special status in the Swedish language. A sole or a plaice or a turbot is a plain old ”fisk,” or fish. But a herring, as Bertil Adolfsson, chairman of the Swedish West Coast Fisherman’s Organization, told me emphatically, ”is something special: it’s a sill, not a fish.” A sill, that is, if it comes from the Skagerrak or the Kattegat or the North Sea; if it comes from the less salty Baltic Sea, off the east coast of Sweden, it will be smaller and less oily, and it will be called a stromming.

SINCE time immemorial, herrings have moved in vast shoals, migrating every year from one area to another in seemingly fixed patterns, then mysteriously failing to show up, leaving fishing fleets with nothing to catch. It happened at Marstrand in Sweden a century ago, after many decades when you could scoop the fish from the harbor with buckets; at Scheveningen in the Netherlands in the 1950’s, and at Siglufjordur and all over Iceland in 1968. Overfishing was certainly a significant factor.

But for the moment, regulations imposed by the European Community and by Baltic governments appear to have improved the situation. Boats from the Swedish west coast are limited this year to 34,917 metric tons from local waters (the Skagerrak and the Kattegat) and 47,102 metric tons from the Baltic. They were also barred from fishing between June 22 and Aug. 5.

The week I visited him, Captain Christianson, a fifth-generation fisherman, sailed on Sunday and dropped his net about 9 o’clock that night as the fish rose toward the surface. He lifted it five hours later, then dropped it again for a shorter trawl. By 9 o’clock Monday morning, he was tied up at the Paul Mattson processing plant here in Ellos, 40 miles north of Goteborg on a stretch of granitic, heavily indented coastline much like Maine’s.

Grabbing a nine-inch-wide rubber hose awaiting him on the dock, he plunged it into the hold, switched on the pumps and soon 30 tons of herring, plus the chilled seawater keeping the fish cold, were headed into the plant. There, gleaming stainless-steel machinery sorts the fish according to size, culling imperfect ones and sending them to a fish-meal factory. Those that survive go onto six filleting lines. A few fillets are shipped fresh, either directly to Goteborg, to be sold in the city’s famous fish market, known as the Fish Church because of its odd Gothic design, or elsewhere. But most go into plastic barrels filled with pickling brine.

That, I had thought, would be it, but no. After they have been filled, the barrels are shuttled to storerooms tunneled into a cliff behind the plant. At any given time, 15,000 of them are stored there, at 32 to 35 degrees Fahrenheit. They stay for up to a year, maturing like casks of wine or brandy. The length of time and the makeup of the brine in each lot is specified by the customer.

About 60 percent of Mattson’s output goes abroad, mainly to Germany, and the rest goes to processors in Sweden, like Abba, whose products are widely sold in the United States, or to markets or restaurants. They add sauces or flavorings.

The permutations are endless. At Melanders Fisk, a leading fishmonger in Stockholm, I counted eight varieties, all house-made — marinated herring (with sour cream), spiced herring, herring in mustard sauce, herring with garlic, herring in curry sauce, herring in tomato sauce, glassblowers’ herring and matjes herring. Matjes means maiden, and matjes herring is made from female fish that have not spawned. Glassblowers’ herring is made by pouring pickling liquid into a glass jar filled with layers of salt herring, sliced onions, carrots, horseradish root and ginger, and seasoned with allspice, bay leaves and mustard seed.

In the canned and bottled fish section of a typical supermarket in southern Sweden, I counted no less than 24 varieties of herring, many available in several different brands.

I’ve met plenty of herring I didn’t like. I find the odor of surstromming, fermented Baltic herring, unspeakably foul. Sotare, or chimney sweeps, which are herrings grilled until soot-black, don’t do a whole lot for me, either.

BUT bockling, or hot-smoked herrings, are a joy, the flesh moist and delicate. And there will always be a place on my table for Janssons Frestelse, or Jansson’s Temptation, named for a cleric, opposed on principle to pleasure, who couldn’t resist it. It’s a simple dish, essentially scalloped potatoes cooked with sliced onions and anchovies. But there’s a catch. The anchovies the Swedes use aren’t anchovies at all but tiny herrings pickled with sugar and sandalwood. Standard anchovies are too salty.

The various smoked and pickled herrings claim pride of place on the smorgasbord, the traditional Swedish buffet, occupying one end of the table and eaten first. Modern life has been hard on the smorgasbord, which at its most lavish can hold 60 or more items. The resplendent buffet at the Operkalleren in Stockholm, initiated in the 1960’s by the great restaurateur Tore Wretman, is no more, but Ulriksdals Wardshus, north of town, still sets a sumptuous table.

My version of this classic is very traditional but with two key (and incredibly optional) ingredient differences – both from India!

The seeds of N. sativa (Kalonji) are used as a spice in Indian and Middle Eastern cuisines. The black seeds taste like a combination of onions, black pepper, and oregano. A hint of chili works for my palate, but again it’s totally optional.

Note! for best results use 12% acetic acid vinegar, which can be found in Scandinavian specialty food stores. Amazon carries 24% Swedish vinegar – just dilute it by ½.

You can also purchase excellent Scandinavian salted herring here. I hope you enjoy this recipe as much as the Swedes do, ! 🙂