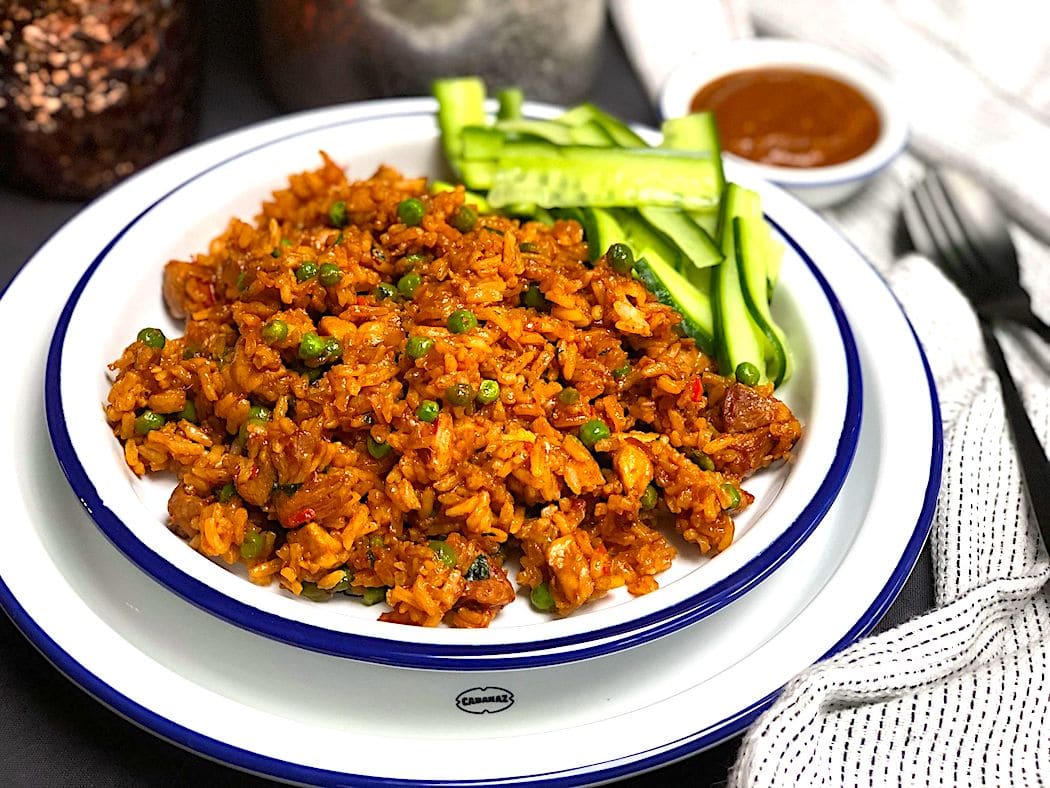 My Citizens! Like many of you, I am currently sitting on 20 lbs. of raw rice that I stockpiled at the beginning of the pandemic – and I am embarrassed to say that it remains untouched after 3 months of aging! Now, as it happens, rice gets better as it ages so no worries on that front, but I do want to make a rice dish worthy of this bounty and I have just the recipe to share with you all today!

Some of you may be familiar with my recipe for Indonesian nasi goreng (fried rice) – it remains the most popular recipe ever uploaded to TFD at 11,000 shares and still going strong! However, there is a variant of this recipe that is actually native to South America – specifically, the tiny country of Suriname which as it happens has a large Indonesian ex-pat population! Read on for all the fascinating details…

Nasi goreng literally means ‘fried rice’ in both the Indonesian and Malay languages and is an Indonesian rice dish with pieces of meat and vegetables added. It can refer simply to fried pre-cooked rice, a meal including stir fried rice in a small amount of cooking oil or margarine, typically spiced with kecap manis (sweet soy sauce), shallot, garlic, ground shrimp paste, tamarind and chili and accompanied by other ingredients, particularly egg, chicken and prawns.

Nasi goreng is sometimes described as Indonesian stir-fried rice, although it is also popular in Southeast Asia. Beyond the Malay Archipelago, it has gained popularity through Indonesian influence in Sri Lanka and via Indonesian immigrant communities in Suriname and the Netherlands. It is distinguished from other Asian fried rice recipes by its aromatic, earthy and smoky flavor, owed to generous amount of caramelized sweet soy sauce and powdered shrimp paste, and the taste is stronger and spicier compared to Chinese fried rice.

Nasi goreng had the same beginnings as other versions of fried rice; as a way to avoid wasting rice. Frying the rice could prevent the propagation of dangerous microbes, especially in pre-refrigeration technology Indonesia and also avoid the need to throw out precious food. Nasi goreng is traditionally served at home for breakfast and it is traditionally made out of leftover rice from the night before. Besides ingredients like shallot, tomato, pepper and chili, the rice is fried with scraps of chicken or beef; usually leftovers from a chicken or beef dish.

The trade between China and the Indonesian archipelago flourished from the era of Srivijaya around the 10th century and intensified in the Majapahit era around the 15th century. By that time Chinese immigrants had begun to settle in the archipelago, bringing along with them their culture and cuisine. Chinese people usually favour freshly cooked hot food, and in their culture it is taboo to throw away uneaten foodstuffs. As a result, the previous day’s leftover rice was often recooked in the morning. Previously, Indonesians probably simply sun-dried the leftover rice to make intip or rengginang (rice cracker), the dried rice also could be ground to make rice flour.

The introduction of stir frying technique, Chinese wok, and also soy sauce probably took place around or after this period, circa 17th century. The common soy sauce has its origin in 2nd century CE China, however, kecap manis (sweet soy sauce) was developed in Indonesia with a generous addition of local palm sugar. Sweet soy sauce plus the addition of shrimp paste are the elements that distinguish Indonesian nasi goreng from Chinese fried rice.

Other than Chinese influence, there is another theory suggested that nasi goreng was actually inspired by a Middle Eastern dish called pilaf, which is rice cooked in seasoned broth. This suggestion is quite plausible in regard to a particular variant—the Betawi nasi goreng kambing (Jakartan goat fried rice), which uses mutton or goat meat (traditionally favored by Arab Indonesians), rich spices and minyak samin (ghee), which demonstrates Middle Eastern-Indian influence.

Some recipes may add black pepper, fish sauce, or powdered broth as a seasoning and taste enhancer. Eggs might be mixed into fried rice or fried separately, either as telur ceplok/telur mata sapi (sunny side up eggs), or telur dadar (omelette), and also telur rebus (boiled eggs). Originally optional, the addition of fried egg is often named as nasi goreng spesial (pakai telur) or special fried rice topped with fried egg.

Nasi goreng often add condiments as add-on upon the fried rice. Fried shallot and traditional crackers are often sprinkled upon to give crispy texture, pickles are added to give sour freshness in otherwise rather oily dish, a fried egg is often placed on top of the dish to add savoriness, while chili paste is to add the zesty spiciness according to one’s preference. Some common condiments are:

Now, as to the Surinamese variant, I quote from this lightly-excerpted and edited text originally from rootzrecipes.com:

Surinamese Nasi is a fried rice dish which is a staple in Suriname. Nasi Goreng is originally an Indonesian dish.

When the Dutch occupied Suriname a lot of people from the island of Java in Indonesia emigrated to Suriname. With their arrival, they brought with them their delicious Nasi Goreng. Over time, the flavors of the Nasi in Suriname were influenced by other cultures living in Suriname which changed the amount and kind of herbs and spices used for the fried rice dish.

The Surinamese Nasi is often served with Surinamese meat dishes such as Moksie Metie (mix of roasted meat), roasted chicken, accompanied with side dishes such as pickled cucumber and bakabana (fried plantain).

Javanese Surinamese people are an ethnic group of Javanese descent in Suriname. They have been present since the late 19th century, when their first members were selected by the Dutch colonizers from the former Dutch East Indies.

After the abolition of slavery, the plantations in Suriname needed a new source of labor. In 1890, the influential Netherlands Trading Society, owner of the plantation Mariënburg in Suriname, undertook a test to attract Javanese contract workers from the Dutch East Indies. Until then, primarily Hindustani contract workers from British India worked at the Suriname plantations as field and factory workers. On 9 August, the first Javanese arrived in Paramaribo.

The test was considered successful and by 1894 the colonial government took over the task of recruiting Javanese hands. They came in small groups from the Dutch East Indies to the Netherlands, and from there to Paramaribo. The transport of Javanese immigrants continued until 1914 (except 1894) in two stages through Amsterdam.

The workers came from villages in Central and East Java. Departure points were Batavia, Semarang and Tandjong Priok. The recruited workers and their families awaited their departure in a depot, where they were inspected and registered and where they signed their contract.

The immigrants were recruited to work on the plantations. The exception was a group in 1904, when 77 Javanese were recruited specifically to work at the Colonial Railways. From World War I Javanese also worked at the Suriname Bauxite Company in Moengo. Immigration continued until 13 December 1939. The outbreak of World War Two ended transplantation schemes.

The specifics of the Suriname-style version of this dish is further elucidated on egullet.org:

To me, the trassi belacan makes nasi goreng Indonesian, but this is highly personal I think. Also the colour is somewhat telling. The Chinese versions around here tend to be white, while the Surinamese tend be quite dark. The Indonesian versions I come across seem to be in between.

As mentioned, there is also a Surinamese rendition of nasi goreng. Supposedly the Javanese brought this to the Sranang melting pot, but the Chinese influenced this cuisine as well. So in the end, who knows?

Some Suri style ingredients include fa-shong (Chinese sausage), a bigger quantity of celery leaves than one sees elsewhere, white pepper instead of black (although I’ve both being used), a mixture of both salty and sweet soy sauce(s), Maggi stock cubes (the red-yellow ones in a tub are ubiquitous). Trassi is not always used, even saw some fish sauce once although this doesn’t seem to be very common. Galangal or kencur are sometimes used as well.

If looking for a cheat, Faja Lobi brand has a jar of nasi trafasie (trafassi meaning different or special).

You will need several specific ingredients to make this delectable side dish – first off, Surinamese shrimp paste (buy it here) as well as special Maggi-brand stock cubes – the Nigerian version here is the closest to what is available in Suriname. Bubuk Kencur (Cutcherry Powder) is available here and you can buy both sweet soy sauce (here) and salty soy sauce (here) from their requisite links. Lastly, the needed Chinese sausages (lap cheong) can be purchased here.

Citizens, this is a delectable version of fried rice that will dazzle your palate with unique flavors – I hope you try it at your earliest convenience and I will be sharing the Malay version of this recipe as my next post! After all, I have 20 lbs. of rice here… 😉 You might wish to serve this accompanying the other classic recipe from Suriname – the chicken and potato casserole known as pom!