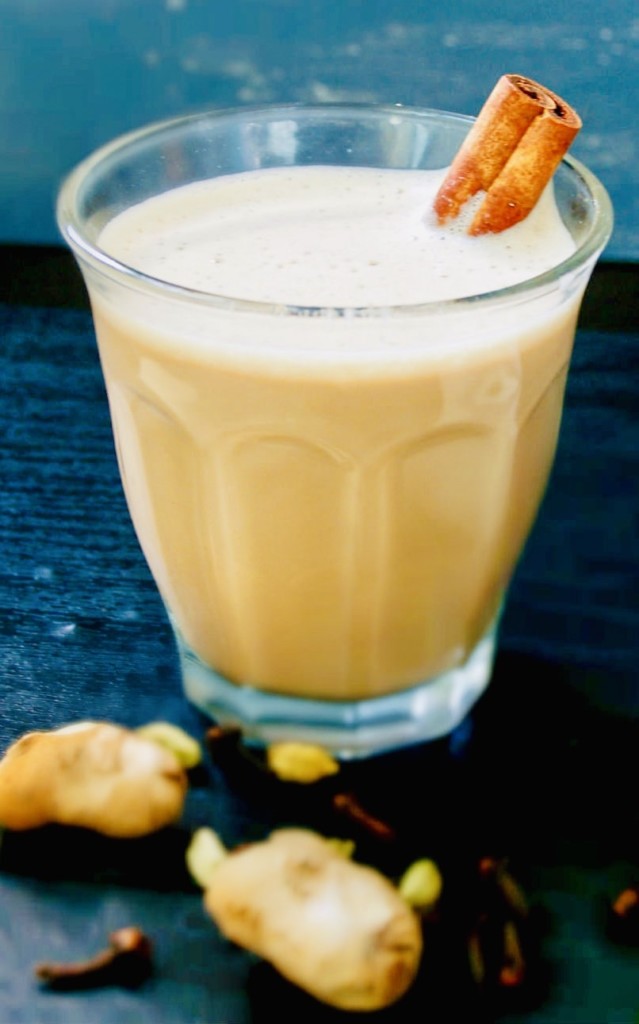 My Citizens! Few things slake the mighty thirst of your Supreme Generalissimo – the forever elevated TFD! – more than a delicious glass of chai tea!

The Sri Lankan recipe is especially to my taste with its frothy goodness, so allow me to share my version of it with you!

Masala chai (literally “mixed-spice tea”) is a flavored tea beverage made by brewing black tea with a mixture of aromatic spices and herbs.

Originating in the Indian subcontinent, the beverage has gained worldwide popularity, becoming a feature in many coffee and tea houses.

It is traditionally prepared as a decoction of green cardamom pods, cinnamon sticks, ground cloves, ground ginger, and black peppercorn together with black tea leaves.

The term “chai” ultimately originated from the Mandarin Chinese word for tea 茶 chá (The English word tea, though, comes from the Hokkien Chinese tê) and the Hindustani word “chai.”

In English, this spiced tea is commonly referred to as masala chai or simply chai, though the term refers to tea in general in the original language.

Numerous coffee houses use the term chai latte or chai tea latte (essentially meaning ‘tea tea latte’) for their version to indicate that the steamed milk, much like a regular caffè latte, is mixed with a spiced tea concentrate instead of espresso.

By 1994, the term had gained currency on the U.S. coffeehouse scene. As noted in this excerpted article from nine.com.au:

It’s probably not what the original British owners would have had for their breakfast (colonial food was more of a mash-up of local and British tastes) but we’d rather eat Sri Lankan food in Sri Lanka, no question.

But we’re here for the tea. Tea came to Sri Lanka from India by way of Scottish-born planter James Taylor in 1867. The tea plantations around Ceylon Tea Trails are still active (where else do you think your Dilmah cuppa comes from?) and we hop in a car to take us through the fields and down to Dunkeld factory, where the greenery that surrounds us became our morning cup.

It is probably the most beautiful factory you will ever see – dating back 150 years, with long, glass-lined facades resonant with age and history.

Inside, we are taught the intricacies of tea making by the manager, Marlon de la Harpe. Did you know that tea is fermented? (That makes it healthy, right?) That’s just one of the many stages of the process that transforms green leaves into dainty cups of liquid gold.

In fact, white, black and green teas all come from the same plant, camellia sinensis – it’s just the processing that dictates the final product. Sri Lanka, though, has built its reputation on black tea.

Using a levelling stick, specific leaves are picked, “We leave the dark green leaves in the field, we call this the ‘mother leaf’,” says de la Harpe.

Then the leaves are withered for two to three hours in an aged furnace, before being dried with cool air for up to 11 hours. The building’s expansive windows are thrown open and air circulates the rooms, to help aid the process.

The leaves are then bruised, releasing their juices, and the first process of oxidation takes place (fermentation). Smelling like freshly-mown grass, the green leaves are pressed together and left in the airy rooms to ferment for a few hours.

De la Harpe says he knows when the fermentation is complete just by touch and smell, “Nothing is computerised.”

The fermentation process is arrested by heating again, then the tea leaves are cooled, rolled, cut, cleaned and graded by strength – “The smaller the tea particle, the stronger the tea,” says de la Harpe, “It only takes 24 hours from field to cup.”

Tea in Sri Lanka is mostly picked by Tamil women, and the sight of vividly coloured saris – pink, purple, orange – among the bright green leaves of the hillside is one something you never forget; it’s like a painting, moving and swaying in front of your eyes.

Before we leave the beautiful factory building to head back to our bungalow, we ask de la Harpe the ultimate question – how do you make the perfect cup of tea? He looks us right in the eyes, and says, very seriously, “Milk into tea, not tea into milk.” That’s us told.

Citizens, my version of masala chai uses my preferred blend of spices and adheres to tradition. You can buy jaggery powder (Indian brown sugar) here. I have every confidence you will LOVE my recipe – so, ! 🙂