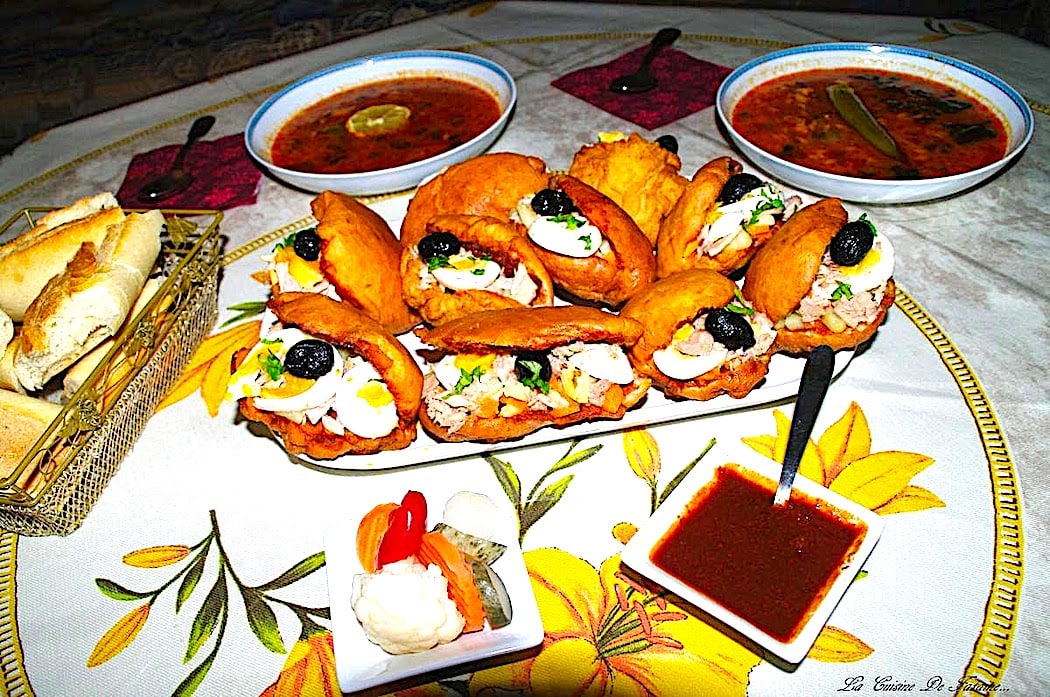 My Citizens! For TFD, life at the top of the empyreal firmament –while satisfying in so many ways–can also be a hectic struggle to balance the twin constraints of limited time against the need to foment gastronomic revolution around the world. In that spirit, let us not forget that it was the Tunisians who started the ‘Arab Spring’ revolution against tyranny!

Leading TFD Nation most certainly defines these antipodes of pro and con for me, and as such I frequently find myself leading our troops into culinary battle and yet needing a portable yet delicious snack to keep my fervor and zeal at a fever pitch! This Tunisian Jewish sandwich, known as Casse-Croûte Tunisien and فريكاسي تونسي truly fits the bill (of fare!) and pays homage to the revolutionary Tunisian people as well.

An unusual dish in that 3 different countries enjoy this dish – Tunisia (did you know they have a 2,000+ year-old community of Jews there?), France (the country’s former occupier) and Israel (where many Tunisian Jews fled in the aftermath of the French withdrawal), this sandwich truly has an epic history. Another legendary Tunisian Jewish dish if you’re interested is this one.

As noted in  this edited and translated text from ‘Tales and Legends of TUNISIA: BANOUN or the legend of the Tunisian snack’ by Albert Simeoni:

“Banoun was a beggar in the Jewish ghetto of Hara, who survived on alms. Sitting in a small corner at a crossroads, he faced the shop of the jeweler Attia, whose place of business was at an angle between the passage Pacha Bey and Rachid Bey. With his wooden bowl placed on the ground, he begged for a few pennies from morning to evening.

His daily lunch consisted of a dry half of bread called tabouna. One half for lunch and the other half for the evening. In the evening, he stayed at night at the house of a cousin who lent him a garret located on the terrace.

Over time, three black olives, a piece of sweet pepper, two slices of carrots landed at the bottom of his half-tabouna. And to top it all off, a sardine with tomato, a drizzle of oil and a little harissa embellished his creation. His neighbour Attia watched as his poor neighbour became ecstatic every time Banoun chewed his lunch.

One day, he asked Banoun to prepare the lunch for him. Wrapped in newsprint, Attia fell under the spell of this preparation.

Attia talked about this new delicacy so much that Banoun, faced with the success of his recipe, decided to install a small nessba (a shop window) in his little corner. He eventually became known by the whole neighborhood.

Thus was born the Tunisian snack that would later become very popular with the Jewish community and even among the natives. All thanks to Banoun, the former Jewish beggar of the Hara.

He eventually moved to Tunis and opened a shop with the sign ‘… AT BANOUN…!’. Soon, other gargotes flourished in the capital and the suburbs except that sardines were replaced by tuna from Sidi Daoud soon became the standard preparation.

Banoun, who had become very rich in the meantime, also invented the famous egg brikh by 1936.

Banoun eventually died and left his shop to his son Eliaou who made his father’s business prosper by adding a grill. Much later his great-grandson Manini took over and again his fame was at its zenith.”

When the French left Tunisia, they retuned home with a taste for the sandwich, which was considered a spicy variant of the classic Provençal sandwich of pan bagnat, which basically put a salade niçoise into bread. The name comes from the local Provençal language, Nissart, in which pan banhat and the alternative spelling pan bagnat mean “bathed bread”. It is often misspelled “pain bagnat”, with the French pain rather than genuine local pan.

In Israel, this sandwich is enjoyed by Jews and Arabs alike and is a truly beloved street food today. In Israel, the sandwich received a few minor adaptations: the small bun grew to an enormous size and preserved lemons were added to the sandwich (a variant I heartily approve of).

With these additions, the sandwich became even more flavorful and bold and the taste profile was moved even further from France and into the Middle East.

Citizens, my version of this sandwich is resolutely traditional, and encompasses the Israeli variant with preserved lemon. The tuna is the centerpiece of this sandwich, so under no circumstances should you use anything but the best! I endorse only Ortiz brand tuna from the Mediterranean, you can buy their basic version here.

My personal favorite, however, is the tuna belly, which is unmatched in richness and succulence – you can buy the more expensive but also more delicious ventresca (tuna belly) here. I also take a nod from the pan bagnat and add some minced anchovies to the sandwich, as I love the flavor. Again – stick with Ortiz brand only and buy them here.

While you can certainly use your basic hero sandwich bread for this, the taste and texture is far from the original bread used in Israel, France and Tunisia – very thick Pita is a better choice, but the best of all is to just go ahead and make the real deal: Khobz Tabouna semolina bread. It’s a very quick and easy bread to make and really helps make the sandwich.

Of course, you also need harissa paste, the spicy Tunisian condiment that is also essential to this sandwich of the Gods – you can buy my preferred brand here. You can also make your own harissa, which is infinitely superior – the recipe is here. As for preserved lemons, you can’t go wrong with these.

I urge all of TFD Nation to proceed forthwith with this Tunisian delight forthwith! 🙂