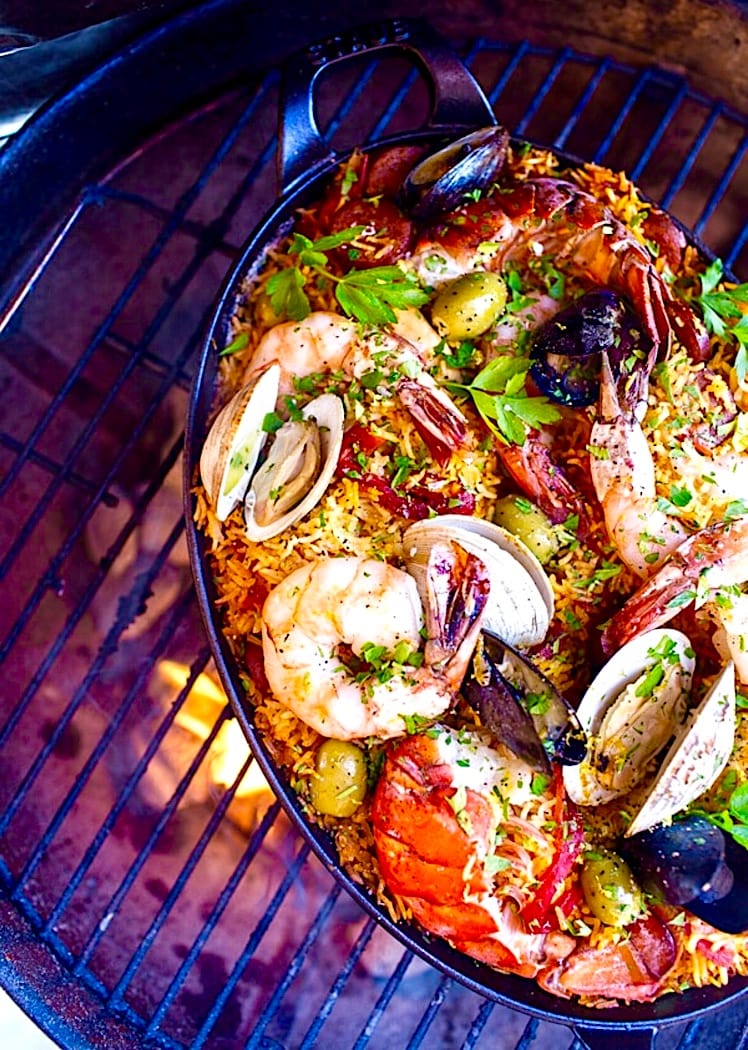 Citizens, it never fails to delight the Benevolence who ALONE is TFD to answer fan mail from his beloved members of TFD Nation! Today, Citizen First-Class Nick M. has performed the needed genuflections, burnt offerings and praying of the gustatory rosary to be heard by the Transcendent One Himself – and I shall answer his plea for the finest paella recipe on the planet – with my own!

Paella is a Valencian Spanish rice dish that has ancient roots, but its modern form originated in the mid-19th century in the area around the Albufera lagoon on the east coast of Spain adjacent to the city of Valencia.

Many non-Spaniards view paella as Spain’s national dish, but most Spaniards consider it to be a regional Valencian dish. Valencians, in turn, regard paella as one of their identifying symbols.

Valencian paella is believed to be the original recipe and consists of white rice (which must be round grain), green beans (bajoqueta and tavella), meat (chicken and rabbit, sometimes duck), garrofó (a variety of lima beans or butterbeans), sometimes snails, and seasoning such as saffron and rosemary. Also, artichoke hearts and stems are used as seasonal ingredients.

Seafood paella replaces meat with seafood and omits beans and green vegetables. Mixed paella is a free-style combination of meat from land animals, seafood, vegetables, and sometimes beans. Most paella chefs use bomba rice due to it being less likely to overcook, but Valencians tend to use a slightly stickier (and thus more susceptible to overcooking) variety known as Senia. All types of paellas use olive oil.

Paella is a Valencian word which derives from the Old French word paelle for pan, which in turn comes from the Latin word patella for pan.

Moors in Muslim Spain began rice cultivation around the 10th century. Consequently, Valencians often made casseroles of rice, fish, and spices for family gatherings and religious feasts, thus establishing the custom of eating rice in Spain. This led to rice becoming a staple by the 15th century.

Afterwards, it became customary for cooks to combine rice with vegetables, beans, and dry cod, providing an acceptable meal for Lent. Along Spain’s eastern coast, rice was predominantly eaten with fish.

Spanish food historian Lourdes March notes that the dish “symbolizes the union and heritage of two important cultures, the Roman, which gives us the utensil and the Arab which brought us the basic food of humanity for centuries.”

Living standards rose with the sociological changes of the late 19th century in Spain, giving rise to gatherings and outings in the countryside. This led to a change in paella’s ingredients, as well, using instead rabbit, chicken, duck and sometimes snails. This dish became so popular that in 1840, a local Spanish newspaper first used the word paella to refer to the recipe rather than the pan.

Poorer Valencians, however, sometimes used nothing more than snails for meat. Valencians insist that only these ingredients should go into making the modern Valencian version of the recipe.

On the Mediterranean coast, Valencians used seafood instead of meat and beans to make paella. Valencians regard this recipe as authentic, as well. In this recipe, the seafood is served in the shell. A variant on this is paella del senyoret which uses seafood without shells.

Later, however, Spaniards living outside of Valencia combined seafood with meat from land animals and mixed paella was born. This paella is sometimes called preparación barroca (baroque preparation) due to the variety of ingredients and its final presentation. During the 20th century, paella’s popularity spread past Spain’s borders.

As other cultures set out to make the dish, the dish invariably acquired regional influences. Consequently, paella recipes went from being relatively simple to including a wide variety of seafood, meat, sausage (including chorizo), vegetables and many different seasonings. However, the most globally popular recipe is seafood paella. The 20th century also incidentally saw a resurgence of ancient Spanish recipes, including garum.

Throughout non-Valencian Spain, mixed paella is relatively easy to find. Some restaurants both in Spain and abroad that serve this mixed version refer to it as Valencian paella. However, Valencians insist that only the original two Valencian recipes are authentic, and generally view all others as inferior, not genuine or even grotesque.

After cooking paella, there is usually a layer of toasted rice at the bottom of the pan, called socarrat in Catalan. This is considered a delicacy among connoiseurs and is essential to a good paella. The toasted rice develops on its own if the paella is cooked over a burner or open fire.

Citizens, to properly make this recipe in its unadulterated, pure form will require work and investment on your part – but the end result TOTALLY justifies the means in this case!

First, you will need to make a seafood stock, part of which requires fresh clam juice – this is my preferred brand.

Next, you will need a proper Spanish paella pan – this more than any other item is a necessity to make this dish, so be sure and get the right size and one made only to the most rigid standards of authenticity. I prefer this one.

The proper kind of rice is the second most important item – use only the Spaniard-approved Bomba rice, which you can buy here. Saffron is a necessary foundational ingredient, so only get the best – this is my choice.

Spanish smoked bittersweet paprika is also a necessity – this is my go-to brand. Piquillo peppers that have been properly wood smoked can be bought here and Spanish olive oil may be purchased here. A secret ingredient in my recipe to give a bit of spicy heat is to add African piri piri seasoning, which may be bought here. Lastly, you need a dry sherry (as opposed to the more common sweet sherry) – I like this brand.

Citizen F.C. Nick – this one is for you and all the other members of TFD Nation to enjoy!