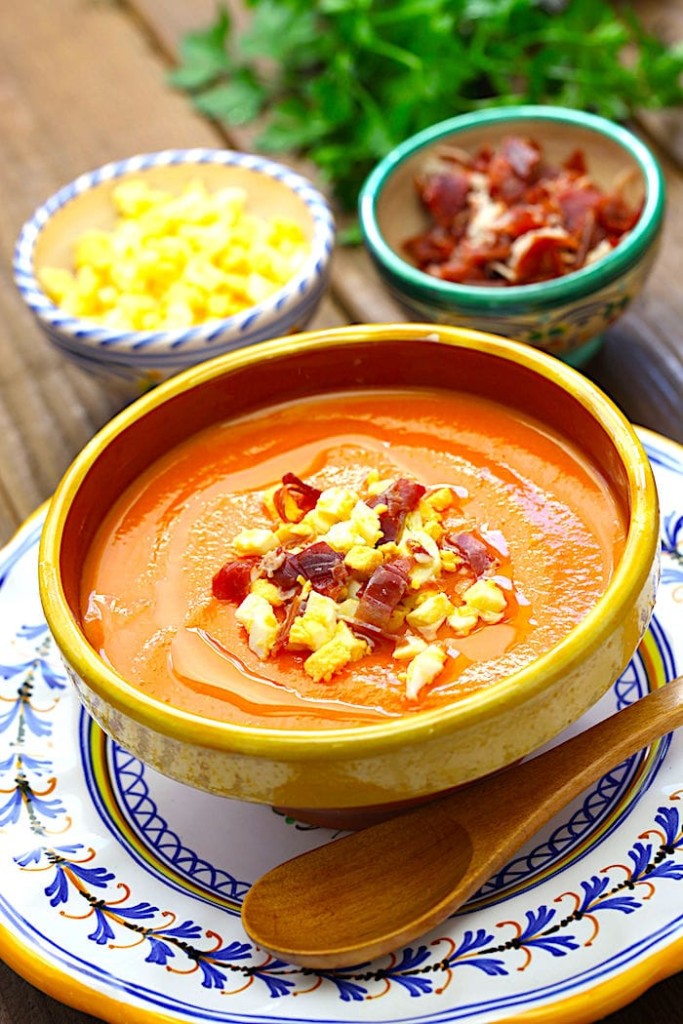 My Citizens, the end of Summer is upon us and it is time to enjoy the last fleeting flavors of the season – mercifully, it is still high tomato season right now and if you are confronted with several prime local specimens at your farmers market – this is one of the best ways I know to enjoy them! 🙂

Salmorejo is a purée consisting of tomato and bread, originating from Cordoba in Andalucia, south Spain. It is made from tomatoes, bread, oil, garlic. Normally, the tomatoes are skinned and then puréed with the other ingredients. The purée is served cold and may be garnished with diced Spanish serrano ham and diced hard-boiled eggs.

Salmorejo is more pink-orange in appearance than gazpacho, and is also much thicker and creamier in texture, because it includes more bread. There are several variations in Andalusia, including ardoria and porra antequerana (with bits of tuna as topping).

As noted in a Wall Street Journal story:

Part of the pride surrounding salmorejo is associated with the ingredients and the fact that Andalusia produces some of the best of each individual ingredient, such as D.O. Baena extra-virgin olive oil, vinegar from D.O. Montilla-Moriles wine and jamón serrano, which is used as a garnish and made from white pigs farmed in Andalusia.

And there is something about its ice-cold temperature that just makes salmorejo a good fit with the sun-scorched region. “Salmorejo tastes Mediterranean. It tastes like summer,” says Mr. Rejón Ruiz.

Salmorejo is typically served as a soup or starting dip. It is often accompanied by fried eggplants or a potato omelet, and goes well with a glass of fine sherry. The salinity of the wine provides freshness in the mouth.

Sillero Francisca Serrano, a 78-year-old resident of Baena, the olive-oil-producing village outside Cordoba, was given her salmorejo recipe from her grandmother and in turn, has passed it down to her own grandchildren. Ms. Serrano says she peels her tomatoes before processing and serves her salmorejo as a dip. She stresses that the local extra-virgin olive oil makes the difference.

Others say that ripe red tomatoes are the key ingredient.

Spanish chef José Pizarro, who co-founded the Brindisa Tapas Kitchens group in London, made his first salmorejo as a boy using tomatoes grown in his own garden. He learned his recipe from his uncle, Angel, from Cadiz and now serves salmorejo at his restaurants José and Pizarro on Bermondsey Street in London.

Indeed, now that salmorejo has gained a following outside of Andalusia, some restaurants serve it year round, a fact that irritates purists because it means cooks may have to use hothouse tomatoes.

To get around the problem of tomatoes that aren’t ripened in the sun, one chef in Cadiz roasts his tomatoes to access a deeper flavor. Cordoba locals have even been known to use canned tomatoes in deep winter.

“I don’t agree with serving salmorejo year round, but I still make it at cooking shows for guests from abroad,” says Mr. Rejón Ruiz. “The trick,” he adds, “is the ripeness of the tomatoes. They cannot be grown in a hothouse.”

Citizens, my version of the recipe is almost 100% traditional – I do add a hint of fresh basil and a roasted garlic clove because I like them in the recipe – feel free to omit them for the classic version. My recipe is particularly creamy as I blend in 2 hard-boiled egg yolks as well as the bread – this is an old Spanish trick. 🙂

This is truly a most special recipe indeed – and a personal favorite of mine! 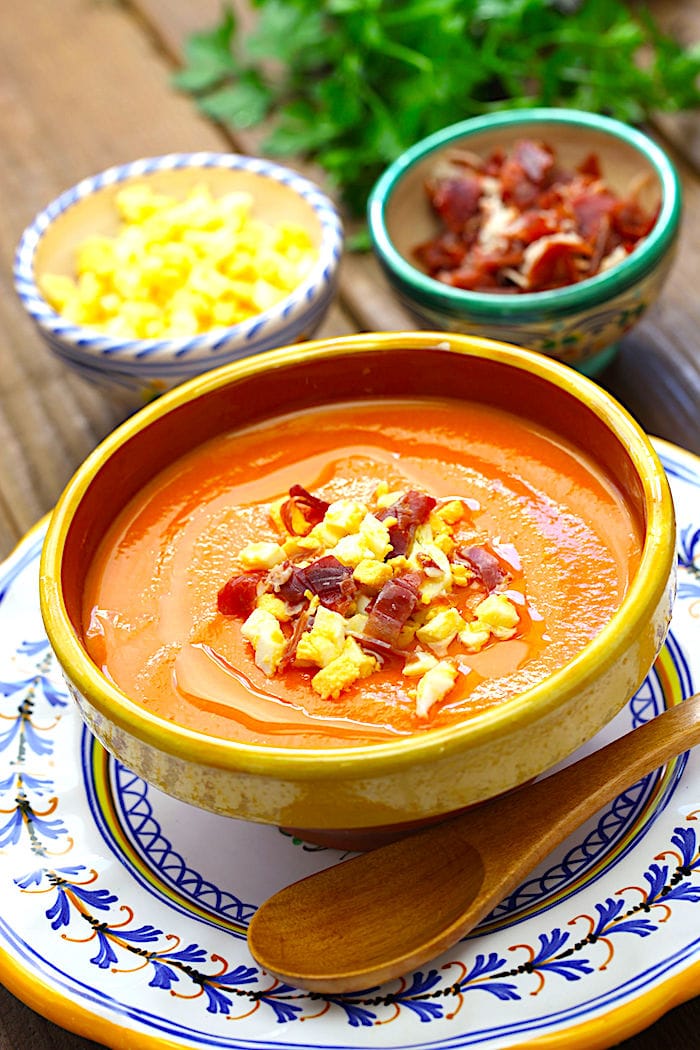