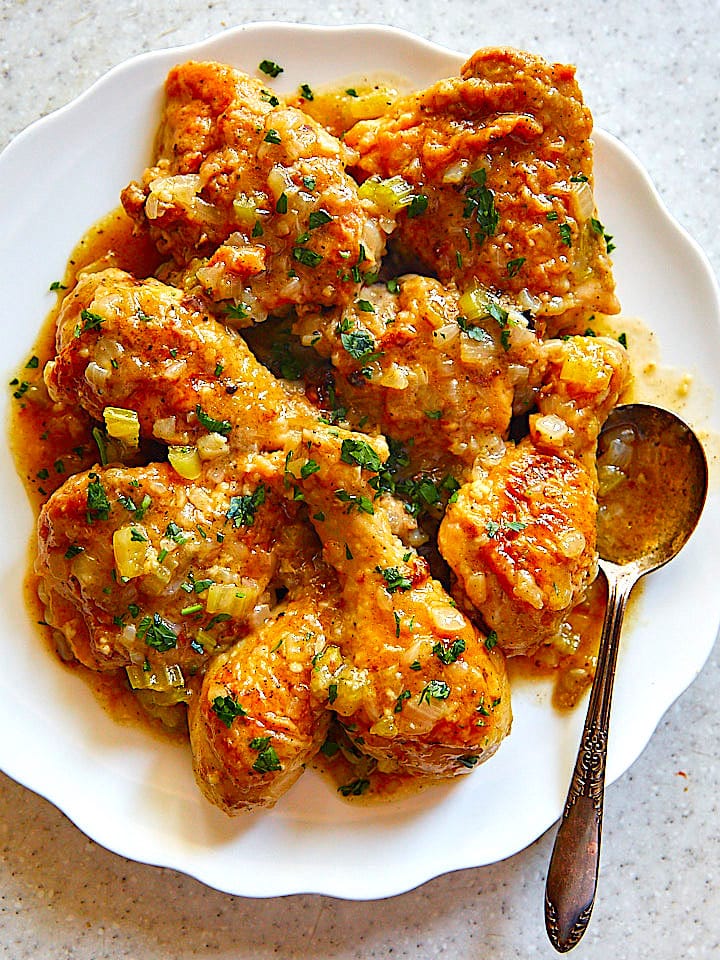 My Citizens! There can be no equivocation or doubt that while the body and mind of TFD are Brooklyn-born and raised, that my soul is without question one with the antebellum south, at least when it comes to food!

Yes, the liberal use of fat and sugar in classic Southern cuisine may not be especially healthy, but as part of an occasional treat – it is unmatched in flavor and toothsome satisfaction!

One of my favorite dishes of this cuisine is smothered chicken, and today I shall teach you how to make it my way! Smothering meat, seafood or vegetables is a cooking technique used in both Cajun and Creole cuisines of Louisiana.

The smothered technique involves cooking in a covered pan over low heat with a moderate amount of liquid, and can be regarded as a form of stove-top braising. The meat dishes cooked in this fashion are typically served over boiled or steamed white rice as a rice and gravy, while the vegetables are typically served as side dishes.

The smothered method of food preparation involves using the Maillard reaction to “brown” the meat or vegetables and then deglazing with stock or water and simmering the mixture over low heat for an extended period of time. It is often done in a cast iron pot or dutch oven, so the heat can be evenly applied and distributed.

A large variety of meats are “smothered” in South Louisiana cuisine, including both domestic animals and wild game. Domestic animals cooked in this fashion include chicken, domestic duck, pork, beef (including such organs as the liver), and domestic rabbit.

As noted in a great article from the Baltimore Sun:

The French have a mad zeal for codification. Nowhere is this more apparent than in the seemingly simple task of cooking chicken.

They have the saut, wherein the bird is browned in butter, then removed to a plate while the sauce is prepared separately, before the whole thing is brought together – briefly, never at a boil – before serving. And they have chicken tuve, always cooked with plenty of liquid and no browning.

Then they’ve got the fricassee family, made by cooking browned chicken (how brown it is and the type of stock and wine determine whether it is a light or a dark fricassee) in liquid until very tender, then binding that liquid with a combination of egg yolks and cream. The blanquette, a first cousin, is the same thing except that the chicken is brought slowly to a simmer in cold stock, giving a more delicate flavor.

Thanks to the French, we have a thousand names for chicken, but I have absolutely no idea what to call the bird I made the other night. If forced to follow French terminology, I suppose I’d call it a modern kind of dark fricassee – one that favors direct flavor rather than richness.

But I prefer to think of it as that prototypically American dish, the smother. That name doesn’t have an Escoffier pedigree, and I’m afraid to look it up in the old Larousse for fear there would be some graphic details on a superior means of slaughter.

This is not to say that smothered chicken has no history. In fact, this recipe somewhat resembles one described under the heading “To Smother Young Chickens” in Lettice Bryan’s “The Kentucky Housewife,” published in 1839 and now available in a facsimile edition from Food Heritage Press, 978-356-8306.

I think it’s time for the smother to come back into its own. If I were French and forced to codify the preparation of a smother, it would go something like this: Meat is lightly coated with flour, then browned. Seasoning vegetables are added and lightly cooked. A moderate amount of liquid is added and everything is cooked, loosely covered, until the meat is quite tender. If desired, other garnishing vegetables can be added when the cooking is almost complete.

What you wind up with is meat that is dead tender (perhaps a bad choice of words, given the name), in a lightly thickened, deeply flavored sauce. Considering the flexibility in seasoning vegetables and cooking medium (stock, wine, water), there are hundreds of possible variations.

The fixed rules for success are these:

* Make sure the pieces are thoroughly but lightly floured. The flour browns nicely, giving a good deep flavor, but too much will turn to a gluey mess when the liquid is added. Bang the floured pieces together, pat them with your hands, knock them against the side of the bowl, do whatever it takes to make sure that only the thinnest coating adheres.

* Brown the pieces slowly. That is what makes for a deeply flavored sauce. It might seem that it’s taking too long, but at 10 minutes per side, you’ll wind up with perfectly golden chicken, ready to braise. Note: That’s golden, not dark brown. You don’t want to overcook the chicken or it will be tough. When you’re braising it, make sure it doesn’t cook too quickly, either. If you rush it, the chicken will get tough rather than tender.

* Pay attention to how you stack the chicken. Dark meat always goes in the bottom, to cook in the liquid. White meat always goes on top, out of the liquid but in the steam so it won’t dry out. Poultry purists will go so far as to say that chicken white meat should never be cooked in a fricassee, stew or, presumably, smother, only the dark. But I’ve got two white meat lovers in my house, so I’m obligated. If you’re not so encumbered, feel free to use just dark meat.

* Cover the pot during the braising, but leave the lid slightly askew. This encourages a slow evaporation, thickening and strengthening the sauce, and it bleeds off steam, keeping the white meat from overcooking (or, more accurately, lessening the amount it overcooks).

* Don’t be tempted to add more liquid than is called for. Depending on how wide your pan is, you may not even be able to see the two cups of wine once they’re added. Don’t worry about it. It’s there. With this amount of liquid, you’ll wind up with a perfect sauce – just barely thick enough to coat the back of a spoon.

Because, of course, you don’t want to take that smothering thing too literally.

Citizens, my version of this Southern classic is quite traditional, including cooking the chicken pieces in bacon fat. You can also use ghee (clarified butter), or a 50/50 blend of both as you see fit.

Being TFD, I do call for two unconventional ingredients. The first is Knorr Aromat seasoning, which I find really amps up the flavor. The ingredients include salt, milk lactose, dried onions, dried porcini mushrooms, and spices as well as onion and garlic powders and Turmeric plus caramel color that adds an appetizing hue to the dish. You can buy it here.

I also use dried porcini mushroom powder, again for the umami factor. You can purchase a top-quality version of it here.

Smothered anything is a classic recipe for a reason – and it is by no means difficult to make! I hope you enjoy it as much as I do. Please note that if you attempt to cook this in anything but a cast-iron pan, the ghost of Craig Claiborne will join forces with me to hunt you down and forcibly teach you the serious error of your ways! 😉