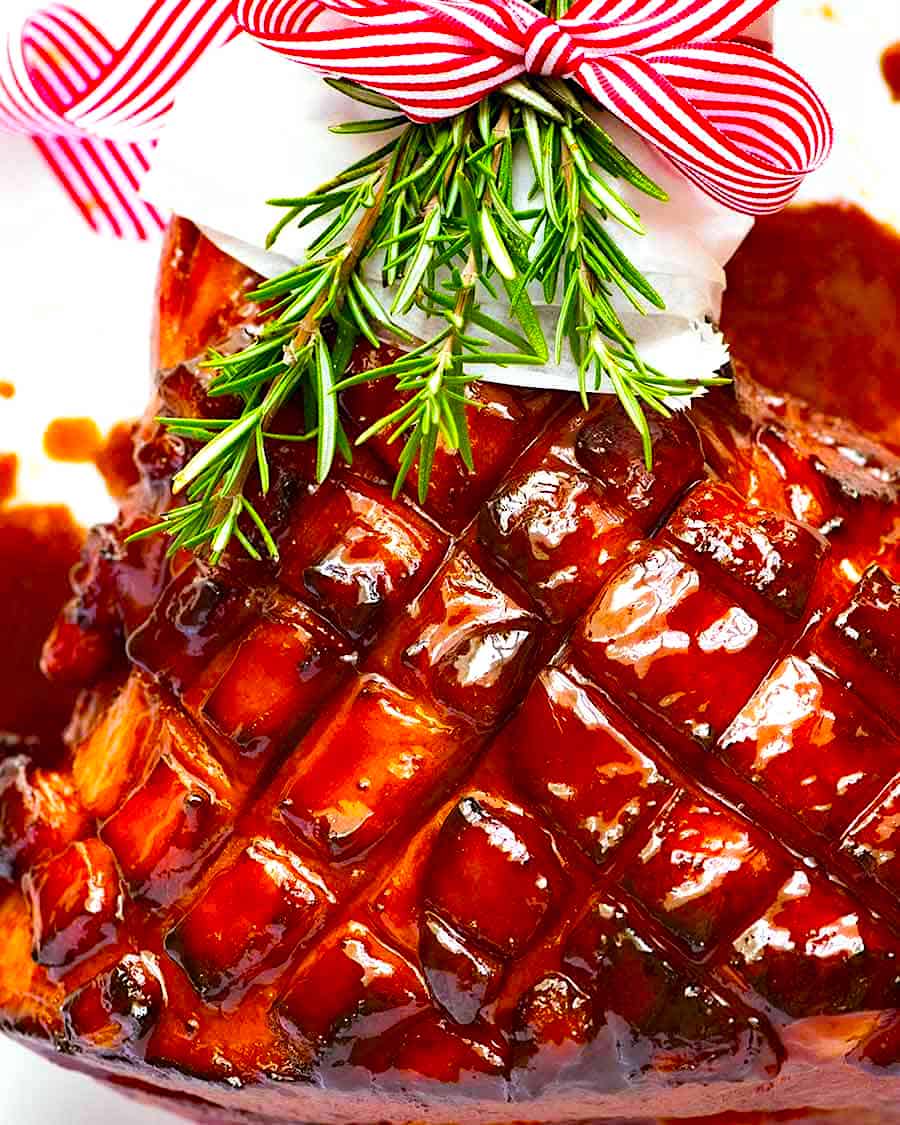 Citizens – to those of you who celebrate it – MERRY CHRISTMAS! The holiday is barreling down upon us like Santa’s sleigh in Grand Theft Auto mode but it cannot truly arrive without the mighty Christmas feast that so many of us look forward to every year. Sadly, the Grinch that is COVID-19 has stolen Christmas (at least with family) this year – and I know that many of My readers in the UK were planning to have their relatives over before the latest lockdown hit with unexpected force majeure.

As such, the members of TFD Nation probably have a ham they still need to cook up for the holiday. Well, let Jolly St. TFD give you an amazing recipe for Southern-style ham as a means to assuage your holiday sorrows! The old pioneer aphorism that eternity is ‘two people and a ham’ is especially apropos this Christmas, so I may as well share the tastiest possible recipe for it that I know – my own, of course! 😀

Surprisingly, the tradition of enjoying holiday ham is worldwide, though a Christmas ham or Yule ham is most often served for Christmas dinner in northern Europe and the Anglosphere. The style of preparation varies widely by place and time.

It is said that the tradition of eating ham evolved from the Germanic pagan ritual of sacrificing a wild boar known as a sonargöltr to the Norse god Freyr during harvest festivals. The Christian adoption of this tradition stems from St Stephen’s Day. In fact, much of the ancient Yule tradition is reflected in modern Christmas celebrations.

12 Days of Christmas? Yuletide was in fact a 12 day, midwinter feast associated with the winter solstice. Ever tried a tasty Yule Log cake? The original Yule Log was a giant log burned for the entire 12 days of Yuletide. And how about the classic carol, “Deck the Halls”? Its lyrics read, “Troll the ancient Yuletide carol,” and “See the blazing Yule before us.”

By way of example of how Christmas ham is enjoyed around the world – in Sweden, the centerpiece of the cold cuts section of a traditional Swedish Christmas smörgåsbord (at Christmas called ‘julbord’) is a large Christmas ham (a cured ham which has been boiled or baked, then coated with a mixture of egg, breadcrumbs and mustard, browned in the oven).

In the United States, the way in which the ham is made is variant, and especially often vary by region or by ancestral background. In southern Maryland, and particularly St. Mary’s County, it is traditional to put stuffing in the ham, a tradition that has been around in the area for at least 200 years. Similar stuffed hams are also sometimes prepared in Kentucky. One tradition from the US South includes preparing a ham with a brown sugar glaze (this is what we are focusing on today!). Americans purchase an estimated 318 million pounds of ham around the holiday season, competitive with Christmas turkey.

Ham is also a traditional Australian dish that features on most tables on Christmas Day. It is cooked and served in various ways throughout Australia, with many families adding special ingredients, making it an important aspect of a Christmas meal. As Christmas in Australia comes at the beginning of summer, many people no longer serve a traditional hot roast dinner, serving cold turkey and ham, seafood and salads instead. Christmas ham leftovers are often frozen to make soup and other dishes when the summer is over.

In the Philippines and among diaspora groups such as Filipino-Americans, a ham is prepared for Christmas celebrations. The ham is referred to as a hamón, from the Spanish word for ‘ham’, jamón. The hamón is sometimes soaked in kumquat and lime juice. It is similar to, but not to be confused for, hamonado, which is another Filipino dish that can include pork and is also served around the Christmas season.

Now, as to my recipe – I have always enjoyed the classic brown sugar-glazed ham, with the fat scored into a diamond pattern and a clove stuck at each intersection. I get it – it’s traditional, it’s delicious and it’s…pedestrian. Not to say that pedestrian is BAD – there’s a reason the recipe is considered a holiday classic, after all! However, TFD prefers a more multi-variant flavor profile in His ham and Citizens – I DELIVER!

First off, you are – of course – in need of a ham. Not just any ham – it MUST have the bone still in it. Bone-in hams are tastier and the ham bone makes a mean ham stock when you are finally done (delightful as the base for split pea soup – which also needs ham meat in it!). I prefer a 9- to 10-pound ham, personally and this vendor makes a proper one – bone-in, hickory-smoked, rind-on. Do NOT buy a pre-cooked or pre-glazed ham for this recipe, please! The rind should either be discarded or you could cut it up into small pieces, cook it up in a frying pan and you have instant dog treats!

My first adaptation to the classic recipe – ditch the brown sugar and go back to what our forefathers enjoyed in the first days of the Republic! I speak of nothing less than hickory syrup, which is still made to this day at Monticello, the estate of Thomas Jefferson! Proceeds benefit the Jefferson Trust and trust me, once you try hickory syrup – you’ll NEVER go back to basic brown sugar! Buy it here.

Next, you’ll want to get your hands on some Major Grey’s-style mango chutney – it’s available in every supermarket as far as I am aware. The combination of fruit, spice and a touch of heat is PERFECT with this recipe – the only thing better is using my Jezebel sauce recipe instead of the chutney! Branston Pickle is an English condiment that tastes a lot like A-1 steak sauce – it is available in most grocery stores and from Amazon here – this ingredient is optional, but recommended. For a mustardy tang, I eschew regular mustard in place of South Carolina Mustard BBQ sauce – it’s richer, tastier and simply awesome. This version is the real deal – buy it here.

A little soy sauce adds umami – I adore the Kentucky-made soy sauce found here, it’s actually far better than most Asian soy sauces and we are making a SOUTHERN ham, after all! Now, that said – I do call for a bit of my secret ingredient for umami as well as soy – white miso! It’s used in the south of Japan, so I’m on firm nomenclature ground here using it in a Southern ham recipe! A touch of peanut butter – also Southern – adds richness and flavor and bourbon is of course a necessity (I love Woodford Reserve Double-Oaked, personally). Garlic, liquid hickory smoke and apropos spices round things out.

This may look complicated – but it’s actually quite easy! Just chuck everything in the marinade into the food processor and blend until smooth.

As to the ham – it’s a common misnomer that you need to baste the ham frequently during cooking. This is wrong, wrong, WRONG! Just put a ½ cup of wine, stock or mead (I love mead!) into the pan, put your ham on a wire rack above it, tent with foil and cook. Only during the last ½ hour should you baste with the glaze – do it any earlier and it WILL burn on you.

Last tip – once your ham is done cooking — don’t carve it up immediately. Like most baked or roasted meats, allowing your Christmas ham to rest for 20 minutes before slicing ensures not only the best flavor, it also make it easier to cut into.

This recipe is truly special, my Citizens – I hope you see fit to use it for this Christmas (or future ones) as you see fit! Happy Holidays, Merry Christmas, Happy New Year to all of TFD Nation!!!