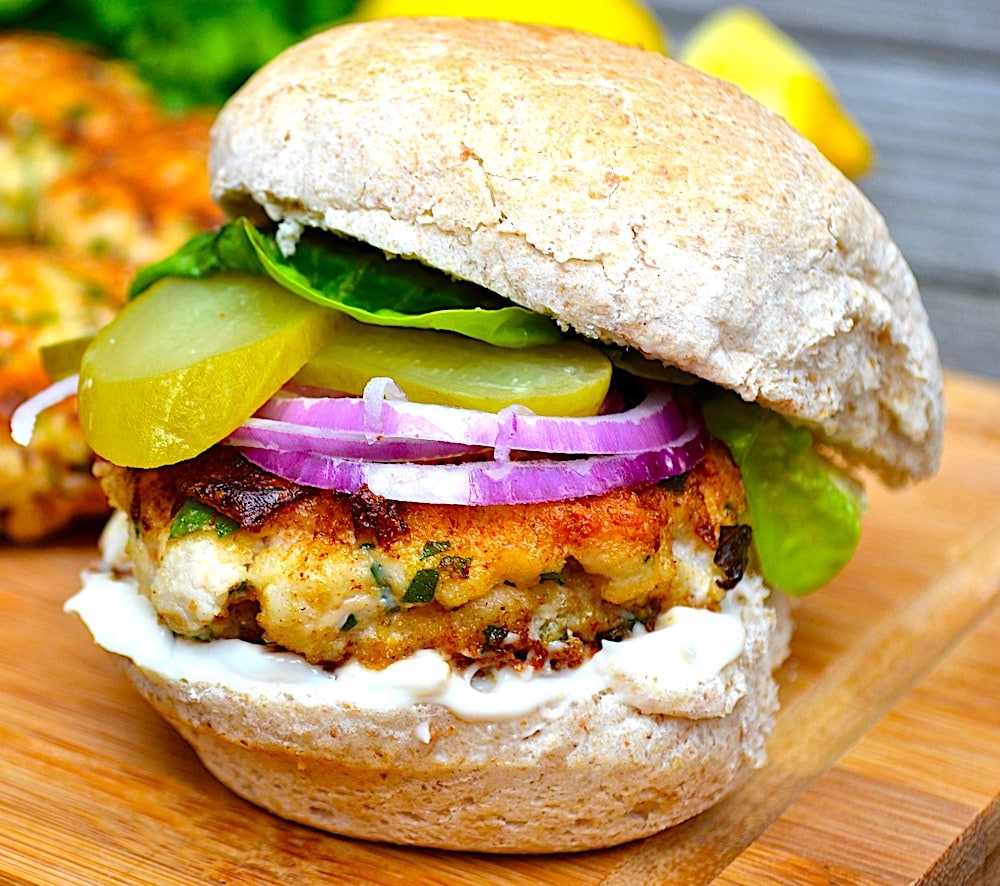 My Citizens, the great state of South Carolina has many superlative recipes, including some truly superb BBQ as well as any number of exceptional low country dishes that are amongst the finest you will ever sample – this is one of them!

MOST Southern foods have taken flight since World War II, landing in far-flung places around the nation. There’s decent Texas-style barbecued brisket in Queens, Krispy Kreme doughnuts in Albuquerque and admirable grits in Baltimore. But a few Southern regionalisms still cling to their roots. Shrimp burgers, found in small coastal villages in the Carolinas, are nearly unheard of in upstate Greenville or Charlotte.

But there’s no good reason to make them stay put.

A shrimp burger is simply a cake of shrimp and seasonings served on a bun, with lettuce, tomato and tartar sauce. Like lobster rolls or crab cakes, shrimp burgers concentrate the sweet essence of shellfish and complement it with semisweet seasonings like parsley, onion and bell peppers. They are easy to prepare, and they bring the warmth of a summer beach picnic indoors — the perfect antidote for fall’s colder days.

All shrimp burgers call for cooked shrimp, ground or finely chopped, and for a binding that may include mayonnaise, bread crumbs, eggs, cooked rice or any combination thereof. Like biscuits or gumbo, no two recipes are the same. We’ve had shrimp burgers as smooth and tender as a boiled dumpling, and ones as colorful and chunky as a chef’s salad. Most shrimp burgers are fried, but they bake well, too, if they have enough binding to hold them together.

Beaufort, S.C., is the heart of shrimp burger country. Several restaurants in the area offer them, but the best is found on nearby St. Helena Island, at the Shrimp Shack, a roadside take-out window on stilts, with just a bench and a couple of tables. It’s like dining in a treehouse. The burger is similarly lofty, with a thin, crispy crust enveloping a uniformly pink, slightly spongy cake that unleashes the turbocharged flavor of ocean shrimp. The shrimp come from boats docked directly across the street at a wharf built in the 1940’s by the parents of the Shrimp Shack’s owner, Hilda Upton.

The freshest shrimp are essential to a shrimp burger. Since fresh shrimp have more natural moisture and stickiness when ground or chopped, they require less binding than frozen shrimp; you can increase the proportion of shrimp in the burger and it won’t fall apart in the frying pan. Dryer, frozen shrimp don’t hold together nearly as well and require large doses of breading and mayonnaise to compensate.

You can further boost the amount of shrimp in the burger if you prepare the ground mixture in advance and chill (or even freeze) the patties overnight in plastic wrap, then remove them just before frying. Mrs. Upton developed the closely guarded Shrimp Shack recipe with Martha Jenkins, another St. Helena Island native, and has been serving shrimp burgers since she opened the Shrimp Shack in 1978. But she’s quick to give credit for the tradition to the local fishermen. ”Shrimpers are on the water for days, sometimes weeks,” she said. ”Shrimp burgers were something they fixed on the boats, in the galleys.”

Shrimp burgers may have been invented to add variety to a diet dominated by shrimp and to make use of shrimp unsold at the end of the day. It is no surprise that shrimp burgers are found in towns like Morehead City, N.C.; Georgetown, S.C.; and Thunderbolt, Ga. — all are tiny towns with a large number of shrimpers among the residents.

In fact, recipes for shrimp croquettes and shrimp cakes (using similar ingredients and proportions) have been a part of Southern cookery for a century or more, appearing in such classic Lowcountry cookbooks as ”The Charleston Junior League’s Charleston Receipts” and Rhett Gay Woodward’s 1930 ”200 Years of Charleston Cooking.” Bill Neal, the late chef of Crook’s Corner in Chapel Hill, N.C., noted in his book ”Southern Cooking” that his shrimp burger recipe was long used as a stuffing for fish. Restaurants, takeout stands and drive-ins probably applied the name ”burger” to their shrimp patties in the 1950’s in the wake of the expanding McDonald’s hamburger empire.

For this recipe, it is imperative that you use fresh shrimp, NOT frozen! Try to use untreated shrimp — those without added sodium or preservatives like sodium tripolyphosphate (StPP). Most frozen shrimp have been treated (the ingredient list should tell you). If you’re using untreated shrimp, increase the amount of salt to ½ teaspoon. If you’re purchasing shell-on shrimp, you should buy about 1 ½ pounds.

My version of the recipe tries to let the shrimp flavor really shine through, and is based on the classic recipe. I have modified it to include my own seasoning blend, including a strong element of celery from stalks, leaves and celery seeds – to me, this is a great complement to the burgers! I prefer to use wild celery seeds (known as radhuni in Indian cuisine), but if you can’t find them you can certainly use regular celery seeds instead. You can easily purchase radhuni here.

Of course, this MUST be served ONLY with the best homemade tartar sauce – for the first time, I share my superlative recipe for it with you!

This is a delicious combo recipe that I strongly encourage you to add to your repertoire, Citizens! 😀